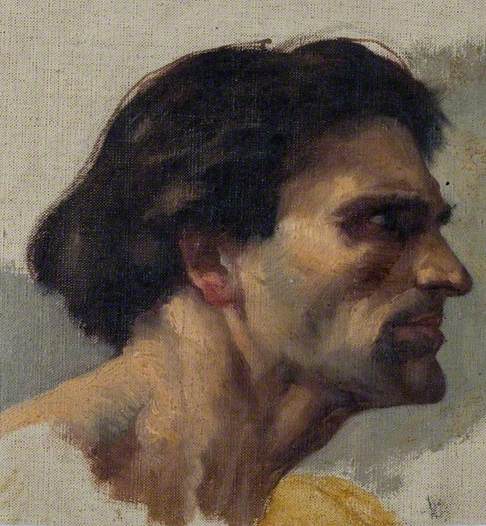 This looks like a study from the Italian model Alessandro di Marco. If it is, then I would date it to around 1875-80. See Buckle, Scott Thomas. “Is This the Face of Alessandro Di Marco? The Forgotten Features of a Well-Known Italian Model.” The British Art Journal, vol. 13, no. 2, 2012, pp. 67–75. JSTOR, http://www.jstor.org/stable/43490541
[A separate submission has been made in relation to this painting by the contributor https://bit.ly/3nV53SY and is awaiting a Collection response]

This discussion is now closed. The title of the work has been amended to 'Study of the Head of a Male Model, possibly Alessandro di Marco', with 'Head Study' retained as an alternative title, at the request of the Collection.

This certainly looks like a study made from a professional model, perhaps in preparation for an ambitious painting based on mythology, the Bible or other literature. The Tyneside-born Charles William Mitchell exhibited two such works at the Grosvenor Gallery in his very brief career as a painter. The first, shown in 1885, was ‘Hypatia’, with Charles Kingsley’s novel of that name cited as the source. This was, and is, Mitchell’s best-known painting, now in the Laing Art Gallery:

The second, shown in 1887 and illustrating Matthew chapter XXVII, was ‘Through Death unto Life – “And many bodies of the Saints which slept arose, and came out of the graves under His resurrection, and went into the Holy City and appeared unto many.” ’ It is just possible that the present study could be preparatory for this unlocated work,

Mitchell exhibited at the RA, Grosvenor Gallery and New Gallery, all in London, and elsewhere between 1876 and 1894. He submitted initially from Newcastle but starting in 1879 from London addresses, moving back to Tyneside probably in the early 1890s. He would thus have been in a position to employ Alessandro di Marco as a model during the 1880s. Would the appearance of the model in the present study be compatible with that of di Marco during that decade - that is slightly later than the period 1875-1880 posited by Scott Thomas Buckle?

I suggest that this discussion should also come under ‘British 19th C, except portraits’ and ‘… North East England: Artists and Subjects’.

Thanks for your insights, Richard. Alessandro was a favoured model for biblical works by artists like Leighton, Watts, Poynter, Burne-Jones, Rooke and Armitage, so it is very possible that Mitchell also used him for a biblical subject. Alessandro was born c1837, so would have been in his early forties when Mitchell started working in London. My approximation for the date of the study was purely based upon other known images of the model. To me he doesn't look much older than he does in the study by George Elgar Hicks at Southampton which is dated 1873: https://artuk.org/discover/artworks/study-of-an-italian-mans-head-17655

Looking through my files for dateable images that appear to feature Alessandro as a model include Edmund Blair Leighton's 'The Secret' from 1885 (Kirklees Museums and Galleries). His age in this, I think, is comparable with the Laing study, supporting Richard's suggestion that it could be a study for Mitchell's 1887 Grosvenor Gallery exhibit. It's far less likely that Alessandro would have travelled to Newcastle to model for Mitchell, whereas the artist's London addresses were all within walking distance of Alessandro's lodgings. It is recorded that Alessandro modelled for E A Abbey in Fairford, Gloucestershire, so he was prepared to travel when required.

He definitely looks older to me here than in the Hicks at Southampton.

Mitchell's 'Through Death into Life', although unlocated, is illustrated in Blackburn's Grosvenor Notes for 1887, p. 42. Three figures: a woman facing left, a white-bearded man facing 3/4 left and the spirit of the saint facing 3/4 right on upright neck, none of which relate to the present study.

Thanks Hilary, that's very helpful. I think that we can now eliminate it being a study for that painting.

I observed that the angle of the head is replicated in Mitchell's 1893 painting 'The Flight of Boreas with Oreithyia' (Blyth Library), although a different model has been employed. If the study relates to this painting, then one would expect the model's features to have been replicated within it. It may just be that the angle of the head is compositionally similar, but that it relates to another painting.

The poses of the model in the present study and of Boreas about to take winged flight in the Blyth Library picture are so strikingly similar that I cannot help thinking that the former, even if possibly executed some years earlier and irrespective of who the model might be, must have at least informed the latter. This is on the assumption that the attribution of the study to Charles Mitchell is firm: I wonder if it is based on anything more than the inscription, lower right, recorded on the collection website as ‘signed (?), pencil: smudged monogram ?’

Jacinto has commented that the model in the present study looks Italian and there are certain facial features which correspond closely with some of the images of (or argued to represent) Alessandro di Marco in Scott’s BAJ article and the De Morgan Collection posting – notably hollow cheeks, a long straight (or almost straight) nose with a softly rounded tip, a pronounced lower lip protruding slightly beyond the upper lip (or at least, in Leighton’s painting ‘Jonathan’s Token to David’, as far forward as the upper one) and a more strongly protruding chin. Inconsistently, however, the Burne-Jones drawing illustrated as Scott’s pl.12 and on the ArtNet website shows an upper lip prominently overhanging the lower one.

I think the Burne-Jones drawing may be unreliable. I suspect he may have "etherealised" the model and softened his features.

Comments on this discussion, "Is this the face of Alessandro di Marco?", have been made on the basis of various likenesses. It seems unlikely that hard evidence will emerge to answer the question posed and that our response will inevitably be subjective.

Is there more to be said before closing the discussion? And should the discussion be closed on the basis that painting "probably" or "possibly" may be taken from this model?

It would be reasonable to propose 'Study of the Head of a Male Model, possibly Alessandro di Marco' as the title. This is based on visual comparison with documented or accepted images of Alessandro (excepting the idealised drawing by Burne-Jones) and on the circumstantial evidence that, through exhibiting at the Grosvenor Gallery and the New Gallery, Mitchell would have been in contact with the circle of progressive artists who employed the model in question. I agree with Jacob, however, that to be more certain we would need further evidence -- ideally, documentation of an association between artist and model.

I would be happy to go along with 'probably' rather than 'possibly' if there is firm support for this. It would be interesting to know Scott's view.

I suggest that we keep the discussion open for a further week or two.

There seems little chance that any documentation will come to light in which C W Mitchell provides the name of his model. Alessandro di Marco's popularity as an artists' model in the later Victorian period has provided us with plenty of comparative likenesses. There is always a hope that fellow Art Detectives might be able to provide further insights, but without any hard evidence, I am happy for the study to be described as 'possibly Alessandro di Marco' (or 'probably' if you feel so inclined).

I recommend that we close this discussion, "Is this the face of Alessandro di Marco?" on the basis that the title of the work could be amended to "Study of the Head of a Male Model, possibly Alessandro di Marco", as outlined by Richard Green and Scott Thomas Buckle in several posts. This is subject to review by the collection and support by fellow group leaders.

I am happy to agree to this recommendation for closure.

Thanks to Jacob and Richard. I wouldn't go any further than Jacob's phrasing of his recommendation.

I have asked the Collection to review the discussion and reply with their thoughts on supporting the title change. David

That sounds fine, and I've used this title on the collection record, keeping also 'Head Study', which was the title given it in the Gallery Register, as an alternative title.