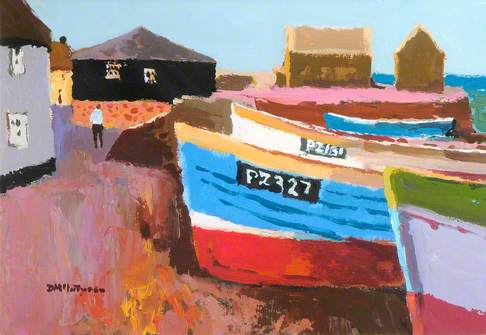 This is certainly inside a harbour of some sort from the pierhead at back and the boats are general small inshore fishing/work boats, probably used for lobster and/or line-fishing.

Can anyone pinpoint the location?

This discussion is now closed. The waterfront has been identified as Sennen Cove, Cornwall. The work has been provisionally dated to the mid-late 20th C and a short description added to the record.

I think this could be Sennen Cove with the Round House (black) in the background - now a Local Craft shop and Gallery.

I live near Sennen and visit frequently, so it looks very familiar to me.

Couldnt agree more...see google earth from top of slipway next to lifeboat station...couldnt screengrab for some reason. I know of nothing like it in Penzance

Definitelty Sennen
He painted there a great deal and painted this Round House (capstan house) from other angles.

The view but from further down the slipway
https://www.123rf.com/photo_72528819_small-fishing-boats-in-the-harbour-at-sennen-cove-cornwall-england-uk-europe.html

Just out of interest there is a website listing fishing boats registered as PZ - https://www.newlynarchive.org.uk/wp-content/uploads/2018/09/Fishing_Boats_by_Name.pdf. This shows PZ327 was named 'Amy Pratt' and was based in Mousehole in the later 19th century. However the painting may be of a later vessel with that registration. When was the picture painted?

What a beautiful place! Here is a google maps link to the location:
https://bit.ly/3hZguHo

Thanks to all for rapid resolution of this query (which I think I raised over a year ago though only now finally surfacing). Good to know its Sennen and a regular subject of the artist

Re: Trevor's point; PZ327 does not look like the 4.5-ton late-19th-century lugger on the Newlyn list. I suspect all three boats partly shown are probably roughly the same as the fourth one (blue) fully seen beyond; i.e. small inshore work/fishing boats, rowed and possibly with the fittings to set up a mast ( for lug or gaff) but by the time the artist was working more likely also to have had outboard engines as well - or inboards, though they may be a bit small for that: anyway, none of them looking like 4.5 tons - either burthen, displacement or deadweight.

In the long-ago the NMM was involved in a 'port-registry transcript scheme' in which it collected historic boat registration numbers from ports large and small all round the country, though up to what date I can't recall, or the extent to which the results have been digitized, or used to make locally digitized lists such as the Newlyn one: I just recall forms being shelved by the box-load at the time. I'll try and remember to enquire!

I suggest an adjustment of the pinting title to something like 'Cornish workboats drawn up on the beach in Sennen Cove, with the Round House and jetty behind'.

The fact two Penzance boats are shown, and the original (capstan) and present (gift shop) use of the Round House should also be added to the record if not already there. The date is likely to be 'mid to late-20th century'. The artist would have only been 22 at the end of the Second World War, whether he served in the forces during it or not, so its going to be post-war .

We can leave it open for a while for any more precise suggestions and a response from the collection, of course, on the matter of having a more informative title (inc for search term purposes). If they have an acquisition date that would also give a terminus to when it was done.

None the less I am marking this as a recommendation to close whenever Art UK thinks any continued inputs have run out of useful steam, and with renewed thanks all round.

The UK Ship Register (part of the Maritime and Coastguard Agency) might have previous lists, which if consulted could give a better date range for the painting.

Thank you to all for a quick resolution!

I have had no luck trying to contact anyone who could advise on the art collection: our two previous contacts have since left the health board, emails have bounced and the extension suggested by the switchboard rang out with no answering machine. Other staff could not help.

The question has been answered, so the artwork data have been updated with a minimal change to the generic title, and the addition of a date and a description.

Description
Small inshore work/fishing boats, rowed and possibly with the fittings to set up a mast (for lug or gaff), but by the time the artist was working more likely also to have had outboard or inboard engines as well. They are drawn up on the beach at Sennen Cove, with the Round House and jetty behind. Two Penzance-registered boats are shown. The Round House, which originally housed the capstan, was converted into an art gallery and gift shop.