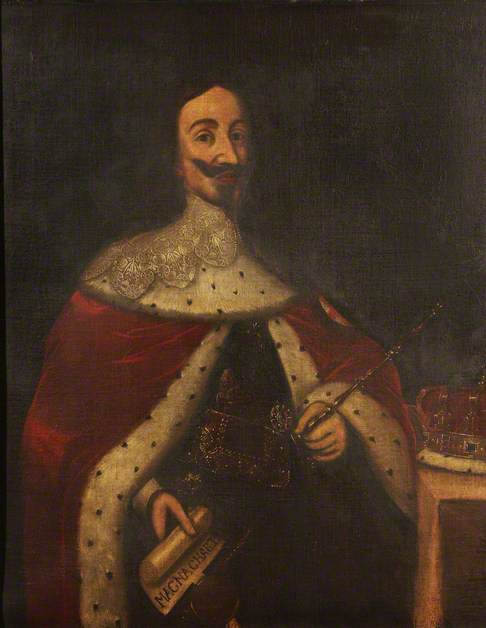 Described as ‘a poor copy of an unidentified original’, this portrait of Charles I was, according to city records, acquired together with the portrait of James I in 1626. Is there another known portrait that is similar? Of great interest is the document held in the right hand, bearing the words 'MAGNA CHART'. Is it an ironic statement by the artist, wishing to please the Puritan city of Coventry? Another entry in the archives from 1661 refers to the restoration of the portrait, just a year before Charles II ordered the demolition of the city walls as punishment for the city's Parliamentarian stance. See attachment for full enquiry.

We have concluded that this work is not a lost original of Charles I.

The head and lace collar seem to be quite close to engravings after a portrait of Charles I by van Dyck, e.g. the one by Robert White (see attachment) NPG D26318. The problem is that Van Dyck was briefly in England in 1620 working for James I and then not again until 1632 till his death in 1641, so this portrait could not have been painted by 1626 to have been copied, and then perhaps placed on another robed body, for Coventry.

This could be satirical attacking Charles I for his breach of Magna Carta - it is hardly flattering. What was the political position of the city over the disputes between the King and Parliament from the time of his accession and parliament's refusal to levy the taxes which the King wished it to do?

The lace collar seems to be very similar to the van Dyck of Charles at Chequers (see Your Paintings http://www.bbc.co.uk/arts/yourpaintings/paintings/charles-i-16001649-56108).

Hard to believe that this picture could have been acquired in 1626, given that it relates to later likenesses of Charles. Can we see a better image?

The collection have agreed for me to add a high resolution image to this discussion. Please note this image is copyright St Mary's Guildhall. Please see the image attached.

The collection is grateful to all those that have engaged with this topic so far, and contributed valuable information and opinion.

To expand a little on archival information, the 1626 date refers to an entry in the City accounts for that year: 'Payd for making of the pictures of King James & King Charles for the hall £6.' The portrait of James is presumably that of James I which still exists in the collection and which, whilst not identical, is largely a version after the Mytens.

The later date refers to a 1661 reference from the city account book: 'Laid out for the city in London, for the kings arms in oil and gold, and the frame £3; for ditto., in water colours, eight feet large25s; for the two kings' pictures with the frames £5 10s; for three cases to bring them all down in, 12s 10d'. The actual identity of the 'kings' is not specified and whilst the arms (now lost) would undoubtedly be those of Charles II to accompany the restoration of the monarchy, the full length portrait of Charles II did not enter the collection until 1681.

Very interesting re the documentation. I'd still have thought from the photo, however, that this painting post dates 1626, and is a contemporary or near contemporary (if not particularly accomplished) derivation of a 1630s portrait of Charles I after Van Dyck. I realise this isn't very helpful, and questions the link to the documentation. But in answer to your original query, 'is this a lost original of Charles I?', I think the answer to that is certainly - alas not.

I think we are nearing a conclusion on this query. Can Bendor point to a (or the) particular van Dyck of which this is a derivation?

There remains the question as to exactly when this portrait was painted and what happened to the earlier documented portrait. Has the painting been examined technically to see if it was all painted at the same time?

Beyond basic visual inspection by paintings conservators - which offered no decisive opinion in this respect - there has been no technical investigation of its composition and any underlying detail.

To add further to the dating debate there is an entry in the Chamberlains' and Wardens' Accounts for the city from November 1628 which records:

"...Paid for wyne bread and beere ..... on tewsday night
the xth of June last in rejoycing for the good successe of the
Parliament, ix s."

This can only be a reference to the successful passing of the Petition of Rites, which occured on 7th June in that year (just 3 days earlier). It is not unreasonable to consider the portrait being hurriedly acquired or commissioned in response to this historic event, with the inclusion of the Magna Carta in the King's hand being an entirely appropriate gesture in this context.

The point is that it is just possible that the original documented portrait lies beneath the surface of this portrait which in its present appearance cannot be as early as the mid 1620s. For political circumstances may have led to the commissioning of an artist to bring the appearance of the King up to date making use of a print as a basis for the new portrait

I will try and summarise this interesting discussion and see if if we can make an official recommendation to the collection.

Assuming it is a 1630s copy of a van Dyck portrait, it has either been commissioned with the inclusion of the satirical MAGNA CHART scroll, or altered soon afterwards to include it. Detailed knowledge of Coventry's history might suggest when it would have been bold enough to display such a portrait.

It does not seem possible to know whether this portrait is one of the two referred to in the 1661 account book entry.

It seems as though the link to van Dyck is generic at best: ie unless anyone knows different this work does not reflect a known original by him. At this stage it could only, probably, be narrowed down to British (English) School.

As an image of the king it may, in fact, be unique.

Good summary Andrew. Interesting though the picture is, I doubt it's worth any spending any money on technical analysis, however.

Thank you to all contributors to this debate.

I would endorse the earlier comment that on the basis purely of the scalloped edge collar we cannot confidently claim this work to be based on a known Van Dyck. Indeed this collar also appears in portraits of the King by Mytens, whilst the Mytens portraits, and an engraving by Cornelius Van Dalen, are amongst the few to depict the king with a coronation robe and sceptre, as in the Guildhall's portrait.

Unless there is comparable evidence from other towns with puritan leanings it also quite a stretch to imagine civic authorities deliberately and publically commissioning or amending portraits purely to offend - surely the preserve of the mischievous pamphleteer.

Unfortunately resources are such that it is highly unlikely the work will receive the level of examination required to determine a precise date and evidence, or otherwise, of subsequent changes being made.

Whilst of little artistic merit, and of imprecise date, the work has significance in that it represents a contemporary or near contemporary portrait of the king that has no obvious model (or at least not amongst surviving portraits), and a story to tell that still defies clear understanding.

It might be worth contacting the Lace Guild to try to get a date on the techniques and information about the pattern: http://www.laceguild.org/craft/home.html

As Andrew Greg says above, the pattern is identical to the van Dyck of Charles at Chequers. Also the same linen collar, the same neck fastening, the same reflective/metallic sheen. (http://www.bbc.co.uk/arts/yourpaintings/paintings/charles-i-16001649-56108). I think it's unlikely that the tree, sun and thistle motifs are coincidental given his Scottish provenance.

To my untrained eye it does look like the lace in this portrait is executed in a more sophisticated way than the van dyke, ie. there seems to be mesh netting which if representative, points towards lace work executed from the 1720s onwards.

Here's some early 17th century pillow made lace with a somewhat similar design, but you can see it looks much cruder: http://en.wikisource.org/wiki/File:1911_Britannica_-_Lace_10.jpg

" this collar also appears in portraits of the King by Mytens"

Can you clarify which one it appears in please?

I have seen scalloped lace collars in Mytens' portraits, but I've not found one with the tree, sun and thistle motifs found in this and the van Dyke, Chequers portrait. Perhaps I've missed the one you are referring to?

It's worth remembering that the Magna Carta held a complex position in the rebel psyche. Many common people in England at the time held the view that the aristocracy represented a "Norman yoke" and that their legal rights and freedoms had been superior in the Anglo-Saxon golden age before the Norman conquest. That this document although offering some protection (for the propertied classes), was also a charter of intolerable bondage to the Church and King. Oliver Cromwell had much disdain for it, once describing it as "Magna Farta".

The picture seems to me to more closely resemble this print than any of the Van Dyck portraits, though there are plenty of differences too:
http://www.britishmuseum.org/research/collection_online/collection_object_details/collection_image_gallery.aspx?assetId=401158&objectId=3068357&partId=1

But as has been said, the really interesting thing is the existence of the Magna Carta scroll. Given that Sir Edward Coke, the great popularizer of Magna Carta, was recorder of Coventry from 1614 until his death in 1634 and also the town's MP in 1624 and 1625 (though in the latter year he finally sat for Norfolk) this seems very significant. It may well be linked to arguments surrounding the Petition of Right in 1628, and to the king's more emollient answer to the Petition on 7 June than on previous occasions. But it's also possible that it is linked to the complex dispute over Coventry's parliamentary election in March 1628, which is heard in the House of Commons on 9 April, with Coke, as the town's recorder, supporting the case of the opponents of the corporation (who were also opponents of the Forced Loan of 1626, a key element of the dispute which led to the Petition of Right and much citation of Magna Carta). For further details see:

A further thought: this is unlikely to be a picture painted around 1661: most paintings of Charles I after 1649 of this type would be most likely to take on a martyrological tone, and probably be derived from the frontispiece to Eikon Basilike.

Description
An unusual depiction of King Charles I, probably painted after a lost original. The painting would originally have been displayed at the Guildhall as a sign of loyalty to the reigning monarch, although King Charles I was famously refused entry to the Parliamentarian city during the English Civil War. For this act of defiance his heir, King Charles II, ordered the destruction of Coventry's city walls. In his right hand the King holds a scrolled Magna Carta, interpreted by some as a later, ironic addition. One imagines this painting being removed and stored away during the Civil War as a demonstration of Parliamentarian support, yet thankfully it was not destroyed and was likely to have been quickly retrieved at the Restoration.