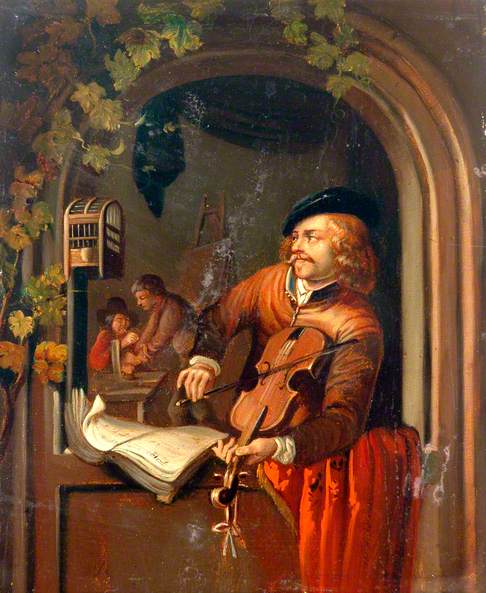 Calderdale note: The records for Calderdale Council list the artist as "unknown" and merely describe it as Flemish School. It is listed as oil on copper and was donated by a local man in 1968.

1968.9/3b "Man Smoking a Pipe" is similar.
http://www.bbc.co.uk/arts/yourpaintings/paintings/man-smoking-21266
Incidentally, would the artist query apply to this work too?

The artist has been amended to 'after Gerrit Dou' and the execution date of '19th C' has been added.

These amends will appear on the Your Paintings website by the end of July 2015. Thank you to all for participating in this discussion. To those viewing this discussion for the first time, please see below for all comments that led to this conclusion.

Yes it's definitley after an original by Dou. There's another awful one in the collection at Brighton. I seem to recall that the grape vine wasn't included in the original Dou, but features in many of the copies.

The orginal is in Liechtenstein.

Original in the Liechtenstein Collection
http://www.liechtensteincollections.at/en/pages/artbase_main.asp?module=browse&action=m_work⟨=en&sid=489525&oid=W-1472004121953420258

This is a poor copy of the painting by Dou in the collection of the Prince of Liechtenstein. There are small changes but it is clearly based on this painting. It looks to be later - probably 18th century and possibly even early 19th century. It will almost certainly always be anonymous and should probably be catalogued as a follower of Dou.

There is no doubt that this is a poor, late (probably nineteenth century) copy after Gerrit Dou.

I emailed the collection a while back with the identification and suggested "copy after" Dou. Follower can suggest an artist working in a master's style - possibly even a pupil, but not necessarily one that produces copies of original works.

The comments above not only answer the original question (with the answer "Yes") but go on to raise other points implicitly about the painting. I would like to comment on these further points.

19th-century copies of paintings by Dutch Golden Age painters such as Dou form a genre distinct from Dou's own productions. Dou's own paintings were produced slowly, with extreme finesse, and were painted for an elite. They were frequently acquired for princely collections, and the same is true of other fijnschilders.

The 19th century copies, by contrast, were produced (presumably) on a production line, often for tourists to Dresden or Munich, and for a middle-class customer base. Many of them are on tin or ferrous metal or a ceramic base, reflecting the industries of Bavaria and Saxony. They were also much admired by their original collectors, and are still found in middle-class homes today. Their survival is evidence for the history of taste. In their own setting they often served a purpose completely different from that of Dou's own paintings in princely galleries and cabinets.

We can of course say what we like on moderated discussion lists like this one, and it is good that there are comments from different viewpoints and value-systems. Understanding the historical roles of the works means accepting them on their own terms and placing them in their historical context. The beauty of Your Paintings is that it has accepted all sorts of paintings, from elite productions to the most naïve, allowing a more accurate picture of the history of painting to be produced than would be usual in some other contexts using different values.

I should have structured my sentence better - I meant the one at Brighton (despite looking alright in the image ) is awful, and I would say was by a British amateur rather than a German tourist work like the Calderdale one. As William points out, some of them are actually very good, in fact the one at Calderdale is competent just some poor retouching in the lower quarter does it no favours.

There must be a lost original as all the versions with the vines are copied from a 1776 etching by Ingouf:

In contrast, an engraving from around the same time is clearly after the Liechtenstein version:

There are many other subtle differences including the stone arch etc.

Calderdale has another copy of the work, linked to Dou but optimistically as "attributed to": http://www.bbc.co.uk/arts/yourpaintings/paintings/the-musician-21345.

There is also a (rather better) copy here at the Holburne, from the collection of Sir William Holburne. It has been cleaned since the PCF photograph
http://www.bbc.co.uk/arts/yourpaintings/paintings/man-with-a-violin-39648
was taken.

I have attached a more recent photo.

The Holburne picture is a copy of the Vienna original - no vine. The second Calderdale picture (just mentioned) is, though damaged, closer to the original but lost work with the vine. Unlike that under discussion, it includes the relief carving.

Coincidentally, I saw the Holburne picture just two weeks ago. Difficult to get a good view of it as it was displayed in a recreation of Sir William's front room (or something like that) but from where I was standing It looked very good. The collection of Dutch and Flemish works at the Holburn are well worth a vist.

Just to add that I have spoken to my colleague, Betsy Wieseman, Curator of Dutch and Flemish Paintings at the National Gallery, and she's just emailed to say: "It’s a copy of a painting by Frans van Mieris the elder, of about 1655, sold Sotheby’s London in 2008 and now in a private collection." So, then, some more food for thought!

Well that sounds like our lost original - unfortunately no image online. Those vine leaves have bugged me for the best part of a decade.

I have been looking through auction records and have been unable to find any work of this subject by any of the van Mieris family sold at auction in 2008. Would it be possible to have more details of the sale?

Further to my previous post, Sothebys list only two records for works by Frans van Mieris the elder sold in 2008 (links below). One is a version of the lady feeding a parrot (of which there is a copy in the National Gallery) and the other an early work of a man smoking a pipe.

Not exactly the same but interesting: http://www.pubhist.com/w3216

Apologies for the confusion. The second work referred to in the original query: http://www.bbc.co.uk/arts/yourpaintings/paintings/man-smoking-21266 is indeed a copy of the work by Frans van Mieris the elder sold at Sothebys in 2008: http://www.sothebys.com/en/auctions/ecatalogue/2008/old-master-paintings-evening-sale-l08033/lot.28.html

Perhaps Ms Wieseman has information on the work currently under discussion, ie the after Dou violinist.

I thought I was onto something; now I'm not so sure, but it might provide a lead . There's a PhD thesis about the Liechtenstein painting which also mentions another version, apparently by Dou himself, with the vine leaves:

"Dou’s version from the De Burleratt Collection (c. 1650s, Basel) (fig.79), for instance, was interpreted by Raupp to represent the theme of playing music as a sensual activity, like indulging in alcohol and associating with women. In the Basel version there is a grapevine, which according to Raupp’s analysis represents Bacchus and drinking ..."

The reproduction is very poor, but seems to show a similar pattern of leaves. The reference given for Raupp is "Hans-Joachim Raupp, “Musik im Atelier,” Oud Holland 92 (1978): 110-11."

Unfotunately, I can't find any evidence for the existence of the name "De Burleratt ", let alone anyone of that name owning a genine Dou.

GIven that this very poor painting was probably created as a nineteenth century tourist souvenir and that there are so many versions and variants of the composition in painted and engraved form (although none that I can find by Dou's pupil, Frans van Mieris the elder), I don't think it important that we find a precise prototype. The painter has perforce reduced the composition to its simplest form. We can conclude by saying that this is a nineteenth century copy after Gerrit Dou.

The collection has now emailed me with the following:

'Happy for this to be listed as artist unknown, after Gerrit Dou.'