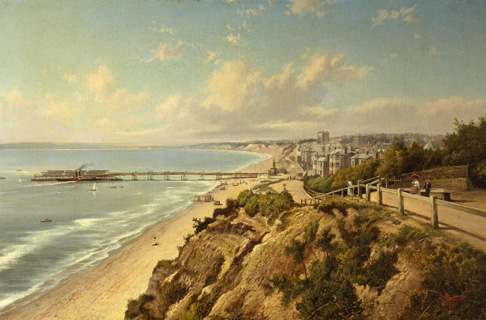 It appears to be signed in reddish-brown lower right. Any chance of a high res image of the signature?

If Maidment (1886-1919) was an architect -though they have been known to paint as well-, this may be a case of name coincidence/ confusion: the Antique Collectors Club dictionary of 'British Artists, 1880-1940', lists 'Edward C. H. Maidman [not Maidment] as exhibiting between 1897 (at Edinburgh) and 1915 (Sherborne, Dorset). He had one picture at the RA and 16 at the Royal Scottish Academy. His own dates are not yet obviously recorded.

That said, it is easy to find other images and reference to a fairly prolific man called 'Henry Maidment' (e.g. at http://www.askart.com/askart/m/henry_maidment/henry_maidment.aspx)He looks suspiciously similar to the present hand and since nothing substantial about him seems to be known -and he is certainly not in the the 'British Artists' list already mentioned - the obvious suggestion is that this is a case of one painter whose name was probably 'Maidman' but that it has been substantially misread, unless he used variant or only semi-legible signatures.

Do any of the buildings help to date the painting more precisely?

If it really is dated 1890 it obviously cannot be by an architect born in 1886 - and if this is his birth date, it is most unlikely that he is the artist who exhibited in Edinburgh in 1897
Surely a church should be visible if the date is 1890?

Pieter is correct, there are some errors.

The architect who exhibited at the RA was Edward C.H. Maidman (Brooklyn House, Sherborn). In 1915 he exhibitied an elevation of Lord Digby's school extension. Previously it seems he was in Edinburgh:

This work does appear to be by Henry Maidment (and not the architect Maidman) - if you compare the signature to this work, you can clearly the line underneath the date as well as it being the same colour as the Bournmouth picture.

Forgot to paste this link in!

St Peter's Church designed by G E Street opened in 1879 in the centre of the town , and Lansdowne Baptist Church soon followed. Should either of them by visible from this viewpoint?

The previous posters are correct. This is an early work by Henry Maidment. As has been pointed out in the very help contributions, Edward C H Maidman was an architect basely largely in Edinburgh. The painting held in the Russell-Cotes collection is fairly typical of Henry Maidment's work although later he was known mainly for his rural landscapes and river scenes, painted often in south-east and east England, along the Thames, and in North Wales. I have traced the existence of one other picture similar to that of Bournemouth which is a view of Ventnor in the Isle of Wight in 1896. The Bournemouth painting is actually being reproduced by a company in North America, the link being here.

Thank you for all your comments. Please find an image of the signature attached. The painting is clearly signed 'H. Maidment' and dated 1890. Interesting to see the monogram on the work at Wakefield-Scearce Galleries. The view shown is taken on the East Cliff. The Royal Bath Hotel (our Founder's business) and East Cliff Hall (now the museum and their home) are just behind the position taken here. This painting has been used many times over the years to show that incarnation of the Pier but is also an interesting study of the cliff before the Undercliff Drive (another project of our Founders) was put in.

For a fuller biography of Henry Maidment please refer to Jeremy Wood's book 'Hidden Talents - A Dictionary of Neglected Artists working 1880-1950', which was published in 1994.

Many thanks to all for their contributions. As the discussion has reached a satisfactory conclusion I believe it may now be closed.

Yes, please shut it down.

Title
Bournemouth, Dorset, by the Sea