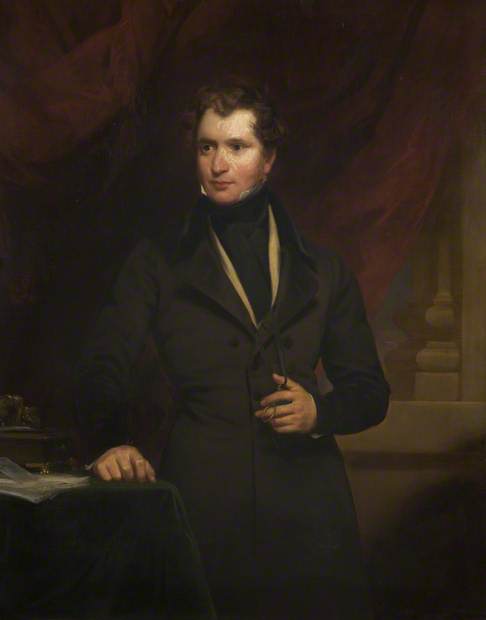 This portrait of Edward Smith-Stanley (1799–1869), 14th Earl of Derby, is one of the thousands on the PCF by an "unknown artist". It is in the collection of the Bury Art Museum. Even in reproduction, this work shows considerable skill and flair and must be by an artist of real talent. I have now established that the painting shows the portrait of Derby by Henry Perronet Briggs (1791–1844), an interesting artist, although nowadays not very well known, despite being a Royal Academician.

Briggs exhibited a portrait of this sitter (then Lord Stanley) at the Royal Academy in 1839. That portrait was engraved by W.H. Mote http://images.npg.org.uk/800_800/1/2/mw191812.jpg and in 1842 by H. Cousins; both confirm that the portrait in Bury is the same composition and probably the same painting. The question becomes – is the work in Bury by Briggs himself or is it a copy? Someone with knowledge of the collections of the Earls of Derby at Knowsley Hall might well know if there is another version of this portrait. I will be contacting an expert who may be able to comment on this question.

A newly attributed portrait of the important politician and later prime minister, the 14th Earl of Derby, is something to highlight. According to the ODNB his achievements can be summed up Disraeli's words: "He abolished slavery, he educated Ireland, he reformed parliament". The portrait by Briggs, however, does not feature in the ODNB's list of images of him.

This information about the portrait of the 14th Earl of Derby is most welcome and will certainly be added to the file on the painting at Bury Art Museum. There is nothing on the back of either the canvas or the frame apart from a scribbled note that a JB worked on the frame in 1949; probably papering-in the canvas and replacing some of the fixings, which do look newish. There is a small gilt tablet on the front of the frame giving the sitter’s full name, his birth and death dates, as well as the date of his succession to the earldom; this may just have been added later, but might suggest that the painting is a posthumous copy. However, it is such a bravura piece of work, very much in the manner of Sir Thomas Lawrence, with its swag of fringed drapery and classical column base in the background, with no hint of hesitancy or uncertainty about it that one might be persuded that it is not a copy at all but the thing itself. The painting formerly hung on the staircase of The Derby Hall in Bury and was transferred to Bury Art Museum when the stairs were redecorated about ten years ago.

The curator at Knowsley is Dr Stephen Lloyd, a portrait specialist, formerly a curator at the Scottish National Portrait Gallery, who may have something significant to add on this subject, on the status of the portrait, and perhaps documentation in the Derby family's papers

Thank you, Martin. I was referring to Dr. Lloyd in my post and have already been in touch as he is best placed to comment.

Thanks, Martin. Martin M. has been contacted.

A portrait of Lord Stanley was in Brigg's studio sale at Christie's 27th April, 1844. It's recorded in Graves's art sales, though the buyer is unknown. There's probably an annotated sale catalogue somewhere.

"As Curator of the Derby Collection at Knowsley Hall, I would concur with Barbara Bryant's perceptive suggestion that the portrait of the 14th Earl of Derby at Bury Art Museum may well be by H.P. Briggs, and I would agree that it looks good enough to be by him and not a copy.
Despite there being a good group of portraits at Knowsley, depicting the 14th Earl, painted throughout his life, there are none by Briggs at Knowsley.
I am curious about the provenance of the Briggs portrait of the 14th Earl from 'the Derby Hall'. The Stanley family did have landed and political interests in Bury, so it may well have been given by Lord Stanley (as he then was titled) from a family property in the town.
Further information about this portrait may well be found in the very extensive correspondence of the 14th Earl, recently accepted by the nation in-lieu of death duties and now housed at the splendidly revived Liverpool Library and Archive, which is located between NML's Walker Art Gallery and World Museum.
For more on the remarkable career of the 14th Earl, see Angus Hawkins' excellent two volume biography, The Forgotten Prime Minister (Oxford UP, 2007)."

It's important to establish, as Stephen Lloyd has told us, that there are no portraits by Briggs of Lord Stanley (later 14th Earl of Derby) at Knowsley. This means quite a strong case can be made for the painting at Bury to be Briggs's original portrait.
As Stephen mentions, the Earls of Derby had family connections to Bury. In fact, the 13th Earl of Derby instigated the building of Derby Hall (the previous location of the portrait), part of a complex of structures on Market Street in Bury (including a hotel and a former Mechanics Institute, both these knocked down). These grand classical Italianate buildings by architect Sydney Smirke were completed in 1850. It is to be expected that portraits of the family of the donor would hang in the building; how and when this particular portrait arrived there is still an open question but I now propose to close this discussion and suggest to the Bury Museum that the attribution of this portrait be given to Henry Perronet Briggs.

It is wonderful how much information this fascinating exchange of e-mails has revealed. I am now satisfied that Henry Perronet Briggs (1791–1844) is indeed the painter of the portrait in the care of Bury Art Museum formerly listed as by an unknown artist. As we know when the painting was exhibited at the Royal Academy, it would make sense for the execution date of this work to be listed as ‘1839 or before’. I am happy to consider this line of enquiry now closed.