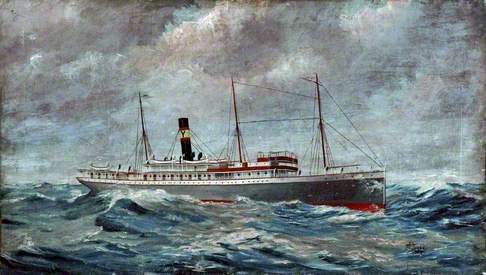 I believe this was painted by my great grandfather John Francis Josse.

I can confirm that this portrait, which is in the collection of the Williamson Art Gallery & Museum in Birkenhead and is the only painting by this artist listed by the Public Catalogue Foundation, bears the signature J.F. Josse and the date 1923. Josse is not among the nearly 400 steamship portrait artists represented in my own British Mercantile Marine Memorial Collection, nor have I ever knowingly encountered any other work by his hand. Contemporary portraits of ships of the Yeoward Line are few and far between, so it might have been expected that this one would have been reproduced in Theodore W.S. Barry's history of the Line's first 100 years, 'Sunward by Yeoward' (publ. Granta Editions, Cambridge; 1994); regrettably, however, this was not the case.

Could Janice provide any biographical information on Josse so that the Williamson and PCF can add it to their records?

...and, of course, I to mine. I would be particularly interested to learn whether John Francis Josse had any direct personal connection with the Yeoward Line, such as having been at any time a member of either its sea-going or its shore-side staff, or whether this painting ensued simply from his having once taken passage aboard this vessel. Do you, Janice, either possess or know of any other paintings by your great-grandfather, be they of ships or of any other subjects, and what, may I ask, gave rise to your query with regard to this one?

John Francis Josse appears in the 1911 Census living in Liverpool.
His occupation is given as seaman, and his employer appears to have been the Mersey Docks and Harbour Board, so he may have been employed on one of their ships that operated on the River Mersey.

Which intriguing insight raises the consideration that a man in that position would have been positively surrounded by ships, while clearly Josse had the talent to paint them. So if this was the only ship portrait that he ever produced, why did he choose this particular ship from among so many - and if it was not a one-off, what has become of the others? It will be interesting to learn what Janice is able to tell us.

Josse's ship portrait was painted in 1923. This was an important year for the Yeoward Line as it saw the launch of their latest (and last) ship "Avoceta". She was a sister ship to the "Alondra" which had been launched the previous year. The Yeoward Line operated between Liverpool and ports in Spain and Portugal, so these vessels would have been seen regularly in the Mersey. Most of Yeoward's ships were built at Dundee, so I wonder why the Williamson purchased this painting, as she was not built at Laird's yard in Birkenhead?

I would tend to doubt whether the Williamson did in fact purchase this painting; rather more likely, I believe, is that it will have been donated to the Museum by someone from the Birkenhead area, quite possibly even a member of Josse's own family. Perhaps either Amanda Draper or Janice herself can enlighten us on this point?

In my experience it is quite astonishing where ship portraits are to be found; wheresoever and at whatsoever instigation they may have originated and by whomsoever they may have been owned initially, with the passage of time and the incidence of such circumstances as marriage, relocation, succession and, all too frequently, eventual disinterest, they could and did change hands and venues to quite remarkable extents. The great majority of the constituents of the BMMM Collection - even setting aside, of course, those emanating from artists or studios (such as the China Trade) overseas - have been acquired far from their known or presumptive starting points. So if Josse did produce ship portraits other than this one, it is to be expected that, sooner or later, they will come to light somewhere or other. If, on the other hand, this is his only such work, painted, as Cliff Thornton suggests, in commemoration of the Yeoward Line's special occasion, it is perhaps not surprising that subsequently some well-meaning descendant or associate of the artist, seeking to ensure his legacy, supposed that the most appropriate repository for it would be his local maritime museum.

A bit more biographical information which may help.

John Francis Josse was born in Liverpool on 19 Jul 1874. When he was baptised in 1879, his father Amiable Josse was described as a mariner (deceased). In 1890, John F Josse won a prize for rowing on the Indefatigable, which was a training ship for the orphan sons of Liverpool sailors (Liverpool Mercury - 8 Aug 1890). He dies in Liverpool in 1956.

It is worth noting that he has a son, also called John Francis Josse, born in 1905 - is it possible that he was actually the artist aged 18?

Re Michael's query about provenance: according to the PCF record, the painting was purchased by the Williamson in 1984. Alice, please would you ask Colin Simpson at the Williamson what records they have of the purchase, e.g who it was bought from and why (if known)?

So, Janice, this picture may, after all, have been painted not by your great-grandfather but by your grandfather. Have you any specific grounds for believing that it was indeed the former rather than the latter?

Well spotted about the purchase, Amanda! I myself came across this picture in the course of a Herculean 'trawl' through all 210,000 of the paintings listed by the PCF in order to discover what 'stock' of ship portraits, both steam and sail, the nation actually possesses. As you may imagine, I simply couldn't take the time to access the 'Additional Information' box on each and every painting.

According to our files the painting was acquired from a local person for a nominal sum in December 1984, together with a collection of artists' materials and equipment formerly belonging to 2 Manchester/North Wales artists called Robinson.
I cannot see any connection between the painting and the equipment and imagine their joint acquisition was coincidental.

Can the Williamson provide the name and address of the "local person" from whom the Museum made this purchase? Even after 30 years these might mean something to Janice - from whom I trust that we may hope to receive her own comments shortly.

I'm not going to publish a name and address but the name was Robinson from West Kirby.
I have noticed a very feint inscription on the reverse of the canvas and am making efforts to decipher it, will let you know how we progress.

Janice has decided not to be part of this discussion anymore, but we should keep going to see if we can attribute an artist.

I can add nothing to this except to say Josse is not an artist name that features on the National Maritime Museum collection database. The painting looks what it appears to be, a competent but probably broadly amateur rather than professional ship portrait: it would be surprising if it were a unique survival, but equally so if there were many by the hand be it Josse senior or junior, though bets must be on the former.

My colleague Bob Todd in the NMM Historic Photos section has kindly identified the ship shown in this painting as the 'Andorinha' built for Yeoward by the Caledon Shipbuilding & Engineering Co Ltd at Dundee and completed in May 1911. She was sold in 1929 to the Pacific Steam Navigation Co Ltd and renamed 'Champerico'; then sold in 1934 to Rafael Torres y Cia, S.A. and renamed 'Vina del Mar'. She was reduced to a storeship hulk at Puerto Chacabuco, Chile, in 1960 and some years later blown aground at Puerto Chacabuco where her abandoned hulk was still extant as late as 1997.

Since there has been no further advance on the artist -most notably no evidence of any other work by him being yet known - I suggest this discussion wraps up. My view from the evidence presented is that he is likely to be the Liverpool-born John Francis Josse (1874-1956) identified in 1911 as a seaman working for the Mersey Docks and Harbour Board: i.e. probably an amateur painter of the 'pierhead' sort or because he painted ships in which he may have worked. One cannot absolutely exclude his same-named son who would have been 18 in 1923 when this was painted, but it looks a practised piece and that caveat can be noted: something else may turn up in due course and things have at least advanced.

This is just a prompt to close this still-open discussion, as suggested above if agreeable. Perhaps the collection could include a brief few lines on the artist, even if provisional, in any future public description which would help as or when anything else by him turns up.

Thank you for the comments.
I have no further information to add but will include the above in our own records at the Williamson.

Description
The ship was built by the Caledon Shipbuilding and Engineering Co. Ltd at Dundee and completed in May 1911. She was sold in 1929 to the Pacific Steam Navigation Co. Ltd and renamed 'Champerico', then sold in 1934 to Rafael Torres y Cia, S. A. and renamed 'Vina del Mar'. She was reduced to a storeship hulk at Puerto Chacabuco, Chile, in 1960 and some years later blown aground at there where her abandoned hulk was still extant as late as 1997.