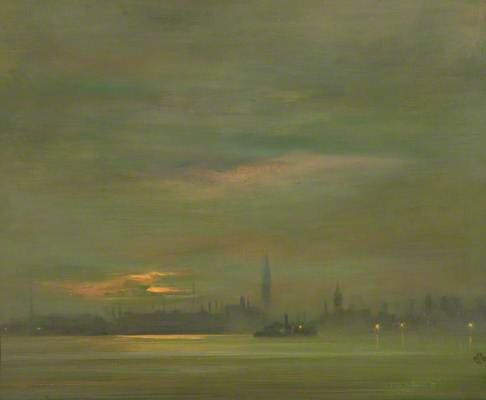 We’ve had this painting in our collection since the 1940s and it has always been referred to as ‘The Whistler’ - note inverted commas. There doesn’t seem to have ever actually been any official research into the piece. All opinion seems to be local or in-house, with some saying yes and some saying no. As you can see, when it was added to ART UK it was listed as being in the ‘style of’.

I also came across a particularly interesting story of how reputedly LS Lowry and a friend viewed ‘The Whistler’ and were of the opinion it was ‘definitely’ a Whistler. Which makes me think this is ‘definitely’ worth a bit more investigation. It is similar to his other works of the Thames Estuary and displays a variation of his butterfly signature. Any Whistler experts out there? Can you help? Be wonderful to have your thoughts and opinions, and to conclude one way or another….

It was donated by a local Stockport man, who donated 24 pieces in total to our collection between 1940 and 1946. Our art gallery was a built as a War Memorial after the end of WW1 which may have been what prompted these donations during WW2. His name was Fred Beech - he is named as the donor on the front of the painting, so was clearly okay with being public about it. From what I’ve discovered, born 1876, died 1958. He was from a working-class Stockport family and became a cotton agent/trader. I couldn’t find any marriage or children listed (he was still living with his parents at 35) and stayed local throughout his life, leaving a full will on his death in 1958 - which was a sizeable amount for the time.

Attachments - documentation
- A letter from 1940 about the Beech donation as a whole
- A report from 1962 focussed on the Whistler attribution
- An undated report also on the attribution with examples of the Whistler butterfly signature
- A 1977 drawing of the Butterfly signature
- A 1963 internal memo, reputedly with Lowry visiting the Gallery and commenting on the Whistler
- A list of all the other pieces he donated to the collections, which may provide clues as to the quality of his choices and potentially where he may have been purchasing his art from.
- Extract from the 1978 ‘Presents from the Past’ exhibition, featuring Beech’s donation to Stockport

Attachments – signature, frame and back of painting
- Butterfly signature
- Painting in its frame whole front and bottom right-hand corner and title and donor label
- Back of painting whole with canvas stamp and Cat No 28 Label and bottom left corner

[on the colour difference between the main image on Art UK and the supplementary photographs supplied] The image on Art UK is a lot bolder I have to admit. It does seem to have been jazzed up a bit on the contrast. But I would definitely say it’s more green than blue. So colour-wise more like the Art UK version but maybe a duller green in reality.
As an aside, on the story of Lowry visiting the Gallery, it was recorded by the witness that they couldn’t identify if it really was Lowry. It is recorded that Lowry came in as he wanted to ‘clean up his painting which is on the back of the picture’. See https://bit.ly/3zmcPKg. No one else could have known there was a painting on the back other than Lowry. There is a picture on the back but it wasn’t discovered until the 1990s when the piece went for conservation.

Signature, frame and back of painting attachments.

Are we sure that this is a view of the Thames? No bridges, expanse of water too wide and I don't recognise the skyline as being London. Could it actually be Venice from the sea?

Have you tried Margaret MacDonald, the Whistler expert -m.macdonald@whistler.arts.gla.ac.uk. It doesn't look like him to me, but I admit it is near in parts. She may know all the close artists.

I think Martin is 100% correct in what he says.

All agreed that it's not Whistler - nor can I see it as either of the Greaves bros, nor Maitland, nor Roussel, nor indeed any of the immediate circle.

Anyone looking at it needs to see it in the whole frame image above - and not be deflected by the colour cast of the Art UK image above.

I agree that it does not appear to represent London, but I can't see it as Venice either.

Do we know anything about where Beech acquired his pictures? Presumably it was from local traders in the Manchester area.

Are we certain that this is not a view across the River Mersey by a Liverpool artist working say in the 1920s? With an added butterfly signature.

Comments on the frame and canvas.

FRAME: the 19th century classical frame pattern, nothing to do with Whistler, was clearly altered to fit the picture as is apparent from the back.

Martin, thanks for the email address. I have sent a message to Margaret MacDonald, but we will not receive any immediate reply as there is an automatic reply in place at present.

This is not a waterfront that rings any bell with me: it's not London, and though the width of water is more Mersey than Thames also fairly clearly not Liverpool let alone Venice. Sheer imagination?

It might be worth considering Thomas Robert Way (1861-1913), who was a painter, lithographer and printer associated with Whistler.

Jacob's comments in regard to the Winsor & Newton canvas stamp are significant. From what I can see from the current image, the Rathbone Place address is given but not the building number 38. Detail found on many of the 19th century stamps does not appear to be present with this stamp. Also the canvas does not appear to have aged in the way one would expect with a 19th century example. W & N left Rathbone Place in 1938. This canvas appears to be early 20th century, as Jacob indicates, and I would think the date of it is between 1910 and 1930. It would help if we could have a clearer image of the W & N stamp and the exact measurements of the stamp. Hopefully, Jacob would then be able to guide us further in regard to the likely date range for the canvas stamp. If clearly post 1903 we could then rule out Whistler as an attribution.

Kind of Grant to pick up on the stamp. But from prior experience I suspect that this is a faintly applied stamp that'll not be easy to improve by photography. Using my online guide to canvas stamps on the NPG website, I thought that it MIGHT date between 1898 and 1920, so not very helpful.

I suspect that we have already ruled out Whistler on style grounds.

Jacob, thank you. I had hoped that we could pin down the date of the canvas within a few years but clearly that is somewhat problematic. In regard to the main issue of 'is this a Whistler or not' I think the clear consensus here is that it isn't right on the grounds of style, quality, period (I think it is post 1903), and what very much appears to be a spurious 'butterfly' signature. What is also noteworthy is that the donor, Fred Beech, didn't seem to think the painting was genuine either (see the letter dated 8th November 1940). From what I could see from other paintings gifted by Mr Beech to Stockport, he had bought work by well-known artists popular during the early decades of the 20th century, presumably acquired from reliable sources. I imagine that Mr Beech was uncomfortable about the 'Whistler' acquisition as perhaps he didn't regard his source for that one as reliable.

Is this meant to be in the style of Whistler or as it has the Butterfly signature is it just a fake Whistler?

The University Library of Glasgow's Special Collecions has a file of spurious butterfly signatures in their Whistler Archive - and some attempt was being made to classify them when I was working at the University - but I don't think that it has yet been possible to specific names to them
The painting itself was probably not a fake or forgery when executed , and the butterfly added deceitfully later.
As far as I know although Way's lithographs have been studied by Patrick Frazer, his oils have not been fully charted

Margaret MacDonald was happy to reply even though she did not have access to her computer when viewing the discussion. In her opinion this is not by Whistler and the signature is not like his. She thought the signature, if it was on the original, or was added later, might be worth checking, but she could not make that out in the photo as she could access it at the time of receiving our email. The yellow cast might be varnish but might just be the lighting or photograph. She would rather see something before being asked to judge it but she really could not see from the photograph anything to justify following it up as from Whistler or his immediate circle. She agrees with others that it is neither London nor Venice. She didn’t remember off-hand if it is in the non-Whistler files in Glasgow (and can’t see being able to access them for a long time), but could say it was not among the Greaves works and is definitely not by him. The local records and provenance would be worth double-checking she thought further but felt the Collection can do that.

Attached: a close up of the signature and a Levels-tweaked version of the canvas stamp, rotated for possibly easier reading. Can anything be said at all about the Catalogue 28 label? Presumably the other paintings in his Collection might provide some clues as to when his collecting began?

Definitely W&N now one can more easily make out 'RATHBONE PLACE' above the 'London', but does the place represented exist?

I am pretty sure that the location depicted is not London, and only suggested Venice due to the relative sizes and proximity of the two larger towers. (See photo for comparison). I must admit, though, it must have been a very foggy night indeed for all of those domes to have mysteriously disappeared!

could this be Greenock where the Clyde is very wide , the church with the tall spire [1855] of Westburn Parish Church = and the painter a Scot?

Patrick Downie made a series of paintings featuring this church

Could this be New York in the 1930's-the Empire State rising high??/

Please see this painting of the Thames at Wandsworth. I think the treatment of the towers and the reflections of the lights on the water are similar. Could the painting be by the same artist or of a nearby location?

This Butler painting has a completely different look on the Government Art Collection website.
https://artcollection.culture.gov.uk/artwork/1722/

The town could possibly be Aarhus in Denmark, with the main spire being Aarhus Cathedral and the smaller spire of Vor Frue Kirke (Church of Our Lady) to the right.
The painting does not show the large tower and roof of the Customs house built in the late 1890s.