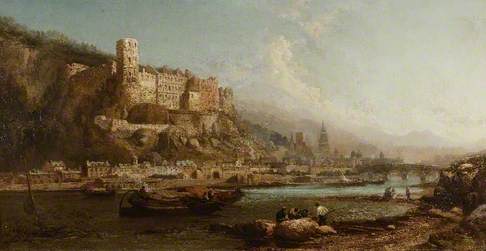 Is 1871 the correct date for this picture? Webb exhibited a painting titled 'Heidelberg' in the 1884 Autumn exhibition of the Royal Birmingham Society of Artists as no. 148 priced at £126.

The Collection has commented: '1871 is the date given on our accession documentation. But please do open a public discussion.'

If the picture was accessioned in 1871, it could not have been made any later, though it could have been exhibited later.

Does the museum not mean that the accessions register records a date of 1871, rather than that it was accessioned in 1871?

Yes, the collection should clarify what 1871 refers to.

How this painting arrived in Worcester is said to be unknown but perhaps the collection could confirm that and say when it was first recorded there. We are told that the 'accession record' (whenever made) gives a date for it of 'c. 1871' -i.e. the picture is not dated and someone has probably made a guess. If that's the case it may have been on the basis that Webb exhibited views of Cologne and 'Mayence' (Mainz) at the RA in 1871 - his only German subjects shown there (with none at the BI where he only contributed to 1863). Cologne and Mainz are both on the Rhine and Heidelburg is on the Neckar, one of its tributaries further south, so the assumption of 'c.1871' is reasonable but of course not proof.

Since Martin has now identified a 'Heidelburg' by him shown at Birmingham in 1884, it's really up to the collection just to note the fact as a more concrete possibility than the 'c.1871' guess. Its a standard view of the Palace there and the old bridge and -short of an 1884 photo of it hanging in Birmingham - I cannot see how else it could be proved to be that picture unless its dimensions are known and match - but I doubt they are.

Unless the collection has anything new to add I suggest the conclusion is that it is possibly the picture shown at Birmingham in 1884. No doubt it was painted from whatever sketches Webb had made in Germany c. 1870 -assuming he went there rather than using secondary sources - but since not dated there is no way of knowing exactly when thereafter.

I think this discussion could conclude as unlikely to go usefully any further.