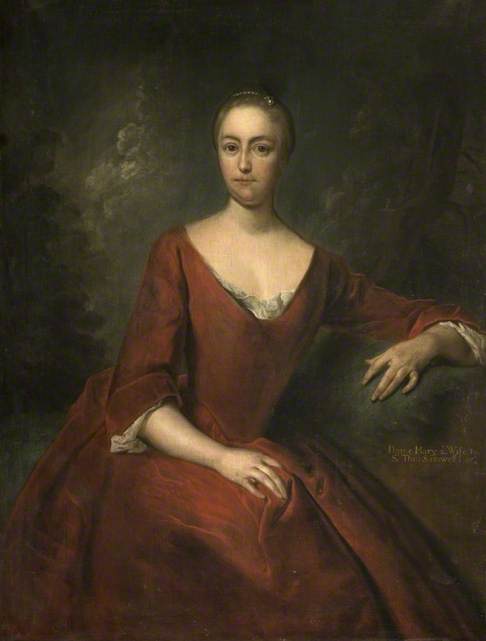 This portrait is currently listed as circle of Joseph Highmore. Might Philippe Mercier be a better attribution?

This discussion is now closed. The artist has been recorded as Philippe Mercier (1689–1760), the date changed to c.1730, and the title clarified as 'Lady Samwell (d.1758), née Mary Clarke, Second Wife of Sir Thomas Samwell, Bt'.

Thank you to all those who contributed to this discussion. To those viewing it for the first time, please see below for all the comments that led to this conclusion.

Yes. Her husband and children by Mercier are in the same collection

Mercier normally signed and normally in dark colours in dark places. . This may be discretely tucked away in the background.

The work of both Mercier and Whood seems rather variable in quality, but Mercier appears to have been relatively more accomplished or sophisticated in painting women. Our picture is rather plain and somewhat primitive, perhaps too much so for Mercier.

The portrait of the sitter's husband and children, to which Christopher Foley refers, is no.80, pl.2c, in the same volume, and was in the same ownership in 1978 -- Northants County Development Association, Upton House.

While the painting does not demonstrate the variable Mercier at his best (but perhaps there is a condition problem), the hands are certainly typical of him: compare 'Miss Adams', admittedly slightly later (signed and dated 1741):
https://static.artuk.org/w800h800/NY/NY_YAG_YORAG_49.jpg

The hands in Dame Mary's portrait are indeed better done, or come off better, than the face (which was possibly so plain that the artist was defeated by it, as it were). Miss Adams, albeit no beauty, is a considerably better picture all around, but yes, the treatment of the hand is similar.

Thanks, Martin and Jacinto. I like the idea of Mercier being defeated by the sitter's plainness! We now need to investigate in which capacity -- if in fact any -- she was 'Dame' as recorded in the inscription. Ingamells and Raines have her simply as Lady Samwell (died 1758, nee Mary Clarke, married 1721 Sir Thomas Samwell, second Baronet, as his second wife).

The words Dame Mary in the inscription (presumably not original to Mercier) are, I suggest, used in an imprecise and archaic way, merely to indicate a woman of high social status and/or the mistress of a great house. If they are to be retained in the title then the following would be more appropriate: 'Dame Mary': Lady Samwell (died 1758), née Mary Clarke, second wife of Sir Thomas Samwell, 2nd Baronet. However it might be simpler to drop the Dame Mary altogether -- as indeed Ingamells and Raines do.

The date should of course be corrected from 17th century to c.1730 and 'unknown acquisition method' perhaps replaced by something along the lines of 'transferred from the Northants Development Association, Upton House, at an unknown date' -- subject of course to the collection's views. Ingamells and Raines record the work as belonging to this Association in 1978.

The sitter was born Mary Clarke, daughter of Sir Gilbert Clarke of Chilcote, Derbyshire. She married first William Ives of Bradden, Northamptonshire, and, as his widow, secondly, on 26 January 1721, Sir Thomas Samwell, 2nd Baronet (14 April 1687-16 November 1757), as the latter’s second wife. Sir Thomas had succeeded to the title on the death of his father Sir Thomas, 1st Baronet, in 1694. His first wife was Millicent Fuller, who died in 1716, He was Whig MP for Coventry from 1717 to 1722. The family seats were Upton House, Northamptonshire, and Atherstone on Stour, Warwickshire. A few further details are given on the ‘The History of Parliament’ website.

I was on the point of suggesting that this discussion might also be linked to the 'East Midlands: Artists and Subjects' group -- on account of the sitter's Northamptonshire connections -- when I realised that all group linkings had disappeared, presumably as a result of the recent website migration.

Just to note, group links are now visible again. Thanks for everyone's patience.

Because of the sitter's connection to Northamptonshire, this discussion is now linked to the East Midlands: Artists and Subjects group.

As there has been no dissent over the last six months, I would have thought that this discussion could be signed off with agreement that the artist is indeed Philippe Mercier and the date c.1730. While the identity of the sitter has not been in doubt, it would be for the collection to respond to the more precise title proposed above, with or without the inclusion of the words 'Dame Mary' deriving from the non-original inscription on the painting; also to consider amplifying the minimal acquisition details, as suggested.

Perhaps the new Group Leader for the East Midlands, Louise Dunning, would have a view on this? We welcome her in any case.

Louise has emailed to say that she will be unable to look at any enquiries or discussions until the New Year owing to the major redevelopment project at Nottingham Castle. She would like to close this discussion.

Perhaps Bendor, as Group Leader for Portraits: British 18th Century, would be able to close this discussion with a recommendation.

Would be good to see a high res image.

Northampton Museums & Art Gallery, thank you for granting us permission to attach this image.

The attribution to Mercier was also discussed in an article dedicated to the subject by John Kerslake,'Mercier at Upton', Burlington Magazine, CXVIII, 1976, p. 770-3, fig. 65. He benefited from seeing at least some of the paintings down from the wall during restoration. Kerslake wrote "The other canvas of the second wife, Mary, though rather damaged in the head by previous restoration, still conveys a formidable-looking lady in her red dress. It must surely be, as Mr Ingamells suggests, what remains of another impressive Mercier."

Ingamells and Raines were also responsible for the Mercier exhibition in 1969 so had been working on him for over ten years.

The Walpole Society and Burlington publications go into this in more detail but it is worth noting that Thomas Samwell was a major patron of Mercier in the 1720s and 1730s with many signed portraits of Samwell, his family and friends in existence.

These paintings were discussed and catalogued by Kerslake, Ingamells and Raines while they were at Upton Hall, then in the care of the Northampton Development Corporation. It is possible that the knowledge of all this scholarly research has been lost during the transfer of the paintings from the Development Corporation to Northampton Museums sometime after 1976, especially as the Art UK record says ‘unknown acquisition method’ for this and at least some other paintings from Upton Hall. I will try and identify these.

I hope that Bendor will soon endorse this solid attribution.

Thank you, Richard, for suggesting that this discussion be linked to 'Yorkshire and the Humber: Artists and Subjects'.

There is no reason not to accept the conclusions to the research of John Ingamells, Robert Raines and John Kerslake, conducted when this portrait was at Upton House, in the care of the Northampton Development Corporation/Northants County Development Association. It was accepted by them as the work of Philippe (or Philip) Mercier, the only qualification being that the head had been damaged by earlier restoration; the painting was dated by Ingamells and Raines to c.1730.

It is recommended that the artist be recorded as Philippe Mercier, the date changed to c.1730, and the title clarified as: 'Lady Samwell (died 1758), née Mary Clarke, Second Wife of Sir Thomas Samwell, Bt'.

The reference to 'Dame Mary', previously part of the title but misleading, could be preserved by including in 'More information' a record of the inscription, lower right (not original to Mercier): 'Dame Mary 2d. Wife to/Sr. Tho: Samwell Bart.'