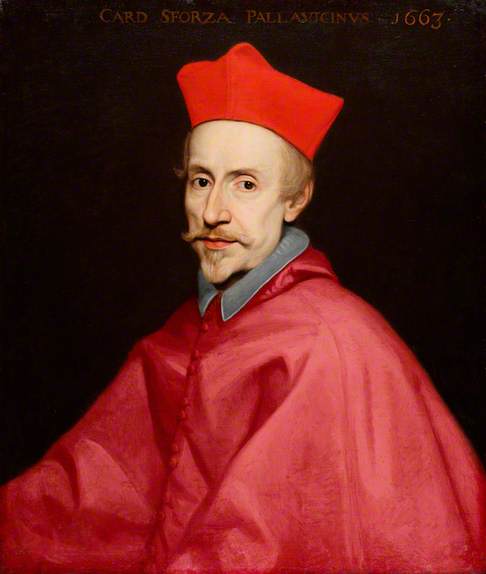 This picture of Francesco Maria Sforza Pallavicino is fine enough that it deserves research leading to an attribution beyond ‘Roman School.’ Might this be by Giovanni Battista Gaulli (1639–1709), also known as Il Baciccio? Compare to this at the National Gallery (which should be consulted about this picture) https://bit.ly/2KZkqdK and this also by Gaulli https://bit.ly/2RFCixD. The provenance is as follows: Collection of English antiquary Smart Lethieullier (1701–1760); by whom presented to British Museum in 1760; from whom purchased by the Ministry of Works in 1946. Lethieullier visited Rome (1737–38) and had contacts there. Ideally, of course, we should get expert Italian input, as with the St John the Baptist attributed to Hendrick de Somer.

This discussion is now closed. This portrait, previously catalogued as Italian (Roman) School, has been attributed to Giovanni Maria Morandi (1622–1717). This is the only known work by Morandi in a British public collection. The sitter’s forename has been corrected from Pietro Sforza to Francesco Maria Sforza.

Thank you to everyone who contributed to the discussion, especially to Professor Francesco Petrucci, Curator of the Palazzo Chigi in Ariccia, for proposing this attribution. To anyone viewing this discussion for the first time, please see below for all the comments that led to this conclusion.

To me it's closer to Sustermans.

There's a drawing of the cardinal by Bernini at Yale: https://artgallery.yale.edu/collections/objects/33879

And indeed portraits of Bernini by Gaulli in the UK: https://artuk.org/discover/artists/gaulli-giovanni-battista-16391709

Gaulli was closely connected to Bernini, who promoted him early in his career, and helped him get a major commission (the extensive ceiling frescoes of Il Gesù in Rome) when he was only 22. It should be noted that Cardinal Pallavicino was a Jesuit.

This picture is dated 1663. Sustermans, who was much older than Gaulli, painted a number of prelates in Rome, but earlier; he was primarily based in Florence, where he worked for the Medici court.

I initially considered Carlo Maratta, but I think Gaulli is a better fit.

Ideally, the relevant person at the National Gallery should look into this, as it is a potentially important picture that should probably be in a more suitable public collection.

The most recent catalogue raisonné of Gaulli's works would seem to be that of 2009 by Francesco Petrucci, presumably updating the previous standard catalogue of 1964 by Robert Enggass (who died in 2003). Francesco Petrucci, who should be consulted, is Conservatore of the Palazzo Chigi, Ariccia, and his contact details are given publicly here:
https://www.palazzochigiariccia.com/wp-content/uploads/2019/10/a.-CURRICULUM-PETRUCCI1.pdf

The Palazzo Chigi houses an accredited portrait by Gaulli of Pope Clement IX, which makes an interesting comparison. It may be seen in this issue of The Frame Blog (fifth illustration from the top):
https://theframeblog.com/tag/francesco-petrucci/

The Frame Blog quotes Petrucci on the Clement IX picture: ‘This portrait, which certainly represents the masterpiece of Baciccio’s already astonishing portraiture production, distinguishes itself as a benchmark of the Roman Baroque, and as one of the greatest achievements of 17th century portraiture.'

Dear Jacinto
The portrait belongs to the Government Art Collection whose purpose is to display its art in government offices around the world and specifically in British embassies and consulates abroad as part of the nation’s cultural diplomacy – see link
https://artcollection.culture.gov.uk/about/history-of-the-collection/
This portrait is on loan to the British Embassy in the Vatican City, which is highly appropriate as until the twentieth century, Pallavicino's 'History of the Council of Trent' (1656-57) was the principal work on this important ecclesiastical assembly. It was commissioned by the papacy as a rebuttal to Paolo Sarpi’s history of the Council, which was highly critical of the Roman Catholic Church and its traditions, and was published in London in 1619.

In addition to contacting Francesco Petrucci I suggest that it might also be worthwhile following up the early 18th-century provenance of the painting, in the collection of the Huguenot antiquarian Smart Lethieullier (1701-1760), by whom the portrait was presented to British Museum on 3 May 1760. According to the Royal Academy’s website (and others) Smart Lethieullier was a scholar and collector of antiquities (British and classical), as well as fossils, and visited Rome (1737-8) where he had dealings with the antiquary Francesco de’ Ficoroni (1664-1747).

Thank you for the clarification, Xanthe, as I imagined the portrait could be gathering dust in some storage facility. However, if it is by Gaulli, I personally feel it should be in a more accessible public venue, as opposed to an embassy or consulate. Be that as it may, the first order of business is to secure an attribution.

The general appearance of the portrait, as well as the detail seen in the high res image (first post above), do not seem high enough in quality for this to be the prime version. A striking portrait in reproduction but it does not appear to be an autograph work by a major hand.

Papal portraits were certainly reproduced, since they were often used as diplomatic gifts, and I suppose portraits of important cardinals may have been as well. In any case, we definitely need the input of Francesco Petrucci, which I hope will be forthcoming.

Having sent Professor Francesco Petrucci a high resolution image of the portrait yesterday 18/04/21 I received a very prompt reply this morning which seems to provide a resolution.

"Thank you for sending me the photo of this rare and new portrait of Cardinal Pallavicino, which I didn't know.
I do not believe that the portrait could have been executed by Gaulli, not only because in 1663 he was young, still influenced by the Genoese culture of which the painting has no trace, but because it does not correspond to his style. Not even the attribution to Sustermans, a typically Flemish artist, can be supported.
It is a portrait of a Roman artist, as shown by the solid, sculptural drawing of the mozzetta.
In my opinion the portrait could be the work of Giovanni Maria Morandi, the most prolific portraitist of the pontificate of Alexander VII.
In addition to being the pope's official portrait painter, he painted most of the portraits of his college of cardinals. Moreover Pallavicino was a friend of the pope, whose biography he also wrote.
I therefore believe that the attribution to Morandi, who in some portraits shows these sharp and sculptural features, is the most probable."

Therefore, I would like to recommend that Art UK forward to the Government Art Collection Professor Petrucci's suggestion that the portrait was painted by Giovanni Maria Morandi (1622-1717).

I have added below a potted biography of Morandi from the British Museum's online collections database.

'Giovanni Maria Morandi Painter, specialising in portraits, and draughtsman, b. Florence 1622, d. Rome 1717.
Originally a pupil of Giovanni Biliverti in Florence, Morandi transferred to Rome in order to enter the services of Duke Salviati. He was soon dispatched on an exhaustive trip through Northern Italy to study the masters and on this occasion visited, among others, the cities of Modena, Parma, Milan and Venice. Upon his return to Rome Morandi was asked to paint a portrait of Monsignore Rospigliosi, later Clement IX, which, though only completed much later, was one of his earliest portrait commissions, a field which was to become his speciality. Although Morandi predominantly portrayed members of the Curia, he also travelled to Vienna in 1666-7 in order to paint the Emperor himself and members of the court. He later produced altar-pieces for the cathedrals in Viterbo, Fermo and Siena, as well as travelling to Naples to paint 'St Pedro de Alcantara in Ecstasy' and 'St Antony of Padua' for the fifth chapel on the left in S. Filippo Neri. Morandi's frescoes of 'Aurora and Cephalus', 'Bacchus and Ariadne' and an 'Allegory of Time' on the ceilings of three rooms in the Palazzo Salviati, Rome, also executed after his return from Vienna, constitute his most extensive decorative commission. He was elected as a member of the Accademia di San Luca in 1657, and twice served as its principe, in 1671 and 1680.'

I am delighted that Professor Petrucci has contributed his expertise to this discussion, since such input is what I had hoped from the start would be forthcoming. There are other fine European pictures on Art UK awaiting an attribution, which would also benefit greatly from a relevant expert. We all do our best here, but sometimes outside help is required for a resolution.

There are no other works by Giovanni Maria Morandi on Art UK, which presumably means this is the only known work by him in a British public collection. I hope Professor Petrucci is able to see the painting in person at the British Embassy in Vatican City.

Or perhaps "attributed to him", looking at the professore's wording.

Yes, Jacob, that is probably wisest.

Yes agree it should be 'attributed to Giovanni Maria Morandi'

Thank you very much to everyone involved in this excellent outcome. We have contacted the collection about the proposed attribution.

Keep in mind that the sitter's name was Francesco Maria Sforza Pallavicino; the "Pietro" is spurious.

The collection is happy to update its database and Art UK to reflect the new attribution and the correct name of the sitter. They are very grateful to everyone involved in the discussion and in particular to Professor Petrucci for his help.