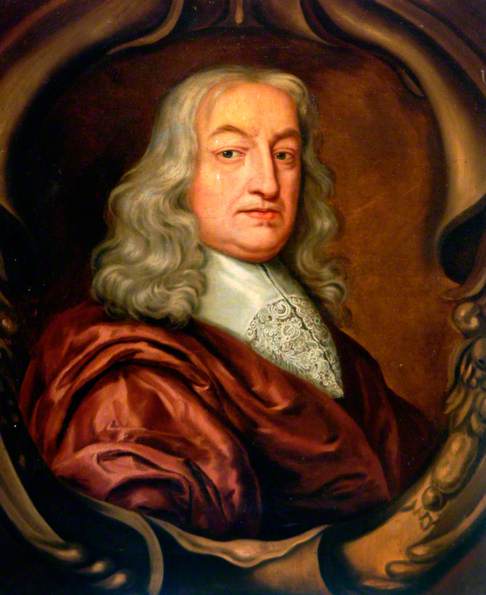 Mary Beale on Your Paintings: http://www.bbc.co.uk/arts/yourpaintings/artists/mary-beale

The collection note: 'I am afraid that the University has no further information on this artwork. We would welcome any further comments!'

Although this picture in its technique and approach, especially with the described oval, I must say I don't think (for me) it quite comes up to Mary Beale's standards. Her portraits are usually better than this. I know that's rather subjective, but there we go.

Of course, it's possible that a degree of dirt and old varnish are making the picture seem a little worse than it is. Equally, it could be a repetition or a copy of a picture by Beale.

The drapery and lace seem rather better painted than the face and hair, suggesting that more than one painter was involved.

In style it does seem to fall within what would be expected from Mary Beale's output, but falls short and is probably by a follower. For an artist who had been an apprentice in Lely's studio and had a thriving practise afterwards it's, in my opinion, not up to Beale's standard.

I can't help with the painter, but the lace neckcloth is Venetian Gros Point lace which was popular from 1650 to 1680, particularly in the last decade of this period. For examples of this see the Portrait of a Young man of the Chigi Family by Jacob Ferdinand Voet c1670 or Sir Godfrey Kneller's Portrait of the Duke of Monmouth c1678. It would therefore seem to date from about then. Needless to say, I collect lace.

Yes, I admit the face and hair do look very pedestrian. Has anyone written a paper on these architectural feigned ovals, I assume there must've been a prototype by Lely?

I recently catalogued a pair of portraits by Joseph Bokshoorn, who has very few paintings attributed to him (his oeuvre probably all down as Lely's) but seem a similar standard to the hand here.

Newcastle University has kindly given us permission to post a higher resolution image of the painting under discussion. It's attached below.

May be bigger, but not higher resolution, i.e. more detail, than the Art UK image, I think.

The jpeg uploaded to Art Detective this afternoon is 2939 x 3600 pixels. There is a difference in detail, which will be more noticeable when enlarging the image on a screen.

The sitter in this portrait might be the English physician Thomas Sydenham (1624 - 1689)? A composite of known images of Sydenham is attached for collective consideration.

The treatment of the long locks in the discussion portrait is very similar to that as shown in the engraving by Abraham Blooteling (1634 - 1690), from, as stated, a Maria (sic) Beale portrait. The engraving was published as the frontispiece in a later edition of Sydenham's "Observationes Medicinae".

The portrait to the right of this composite is also of Thomas Sydenham, and also by Mary Beale, from the National Portrait Gallery's collection.

The portrait on the extreme left of this composite is also of Thomas Sydenham, and also by Mary Beale, from the Royal College of Physicians, London, collection.

If the above attributions are correct, it would appear that Mary Beale painted Thomas Sydenham at different periods in his life. It is possible, therefore, that the discussion portrait is just another, later-life, rendering of him by her, as he looks older in it than he does in the other three images in the composite.

Edward, I think Andrew is right - at maximum size it just goes blurry. It seems that the photo itself is a bit out of focus, and there's nowt you can do about that without a re-shoot!

Yes, the detail you'll be able to see will always be relative to the original photograph and both versions of the image are certainly taken from the same photo.

But the one attached yesterday, with a pixel count around three times higher than the image shown on Art UK, will allow you to look more closely at details without pixelation compared to the Art UK image – like the lace on the sitter's neckcloth, or the differences in colour in his hair. Hopefully it's of some use, anyway.

The enhanced image linked by Edward makes it clearer and more obvious that the rendering of the clothing is significantly more accomplished than that of the head and hair, which suggests two different hands at work (unless this is the work of a skilled drapery painter trying to go beyond his field of competence).

There are numerous portraits by or attributed to Beale on ArtUK with very similar if not identical oval painted framing devices, though they may have been used by others in that period and I imagine could have been done by a "framer," so to speak, analogous to a drapery painter (as was the case with the well known "Birch heads" engraved by Houbraken in the 18th century, whose elaborate rococo frames were engraved by someone else, the Frenchman Gravelot). I should like to hear from a specialist regarding the matter of the framing.

If this picture is by Beale, however, it is a lesser example, meaning she was capable of superior work, at least in terms of the subject's head--though curiously, in many portraits by her on ArtUK, similar drapery is not as well painted as here; it is practically never this buttery smooth, highly finished and expertly shaded. It would be of great interest to know if she sometimes used a drapery painter.

And, despite the relatively inferior quality of this head, there are some rather dreadful portraits at least ascribed to her on ArtUK, and some others most probably by her but not at her top level. Of course, our picture could be by a follower or "circle of" Mary Beale.

Compare the drapery and lace in our picture to those in this one:

Or to the drapery here:

As for the head in our picture, it would not be among her best but it is about the same as this:

So, the painted frame and the head fit well enough for Beale, but the lace and drapery do not. It makes little sense she would employ a drapery painter so rarely, especially for the portrait of an older man who remains unidentified, as opposed to a female aristocrat or some other lofty personage. Thus, this picture could be after or in the style of Beale, either by someone who was better with drapery than she or by a drapery painter and another who did the head.

And yes, architectural painted frames wee used by Lely in a number of portraits, such as that of Oliver Cromwell.

I obviously meant to write that painted frames were (not "wee") used by Lely. Here are a couple of examples:

Our man (who happens to remind me of the 1940s film actor Sydney Greenstreet), does not look like known portraits of Thomas Sydenham to me. The eyebrows are wrong, and the eyes are different.

Does the university have any information on how the portrait came to be in their collection? It's not a particularly old University, and I wonder whether this portrait may have come from one of the earlier institutions like the School of Medicine and Surgery or the College of Physical Science?

Even those two earlier institutions were founded in the 19th century, in 1834 and 1871, respectively, but I assume the point is that provenance from either of them would suggest the sitter's area or field of work and possible prominence.

I really wish that Mary Beale's work could be more appreciated than it is. A substantial body of her work is displayed very poorly up the back stairway at Moyses Hall in Bury St Edmunds. She deserves much better.

This discussion, dormant for over three years, seemed to establish an early consensus that the portrait is close in style to that of Mary Beale, but not quite good enough in the treatment of the face and hair to be given to her unreservedly. The present work could be from her circle or a copy (either contemporary or later) of an unidentified Beale. In any case it is probably the work of more than one hand – the lace neckcloth and drapery being of fine quality and the fictive frame likely to have been provided by a specialist. ‘Style of Mary Beale’ might therefore be an appropriate catch-all designation.

In contrast, discussion of the sitter’s identity did not really take off and has stalled since 2017. We are presented with a considerable challenge in this connection because, apart from the evidence of the image itself, the only clue we have is the unexplained connection of a Restoration era portrait (or copy thereof) with its current owner Newcastle University, established as recently as 1963. The latter was formerly, from 1937 to 1963, King’s College, an outpost of the University of Durham. King’s College brought together, in Newcastle, the School of Medicine and Surgery (later the College of Medicine), established in 1834, and the College of Physical Science (later Armstrong College), founded in 1871. The University of Durham had been founded in 1832 and opened in 1833.

Thanks are due to Kieran for his interesting suggestion of the physician Thomas Sydenham as the sitter and the related comparative images. While I agree with Jacinto that our portrait does not quite match the accredited images of Sydenham, it is plausible that the present work might portray another physician of fame, which would have been an appropriate acquisition for the College of Medicine, thereby finding its way eventually into the Newcastle University collection. Subject, of course to Bendor’s views, I suggest that the hitherto dormant discussion should remain open for another few weeks in the hope of prompting further proposals as to the sitter’s identity.

Meanwhile, we are also grateful to Peter Sanders for identifying the neckcloth as being Venetian Gros Point lace, thereby pointing to a probable date in the 1670s.

As there have been no comments for over a month, I propose bringing this discussion to a close with the recommendation that the portrait's authorship be recorded in the form 'Style of Mary Beale (1633-1699)' -- for the reasons summarised in the first paragraph of my post of 06/04/2021. This provides an answer to the original question, even if no further progress has been made in identifying the sitter. With regard to the latter, sadly we have been unable to improve with any certainty on the existing 'Portrait of a Gentleman'. The collection may wish to add 'possibly a physician', although the grounds for this are slender.

I think Richard summarises everything here very well. It would still be good to see a higher definition photo.

Thank you all. I've asked the collection for permission to update the record as suggested and if it might be possible to send a better image before we conclude.

There's still limited access to the collection due to Covid-19 restrictions and the availability of staff. Our contact there has arranged for some high resolution photographs and details, but it's uncertain at present when they'll be able to access the work. She has commented that the painting was part of the Pybus Collection, which supports the suggestion that the sitter had a medical connection. They are looking at whether there are further archives to dig into for identification of the sitter or artist, but initial indications are that it was, historically, attributed to Beale.

Title
Portrait of a Gentleman