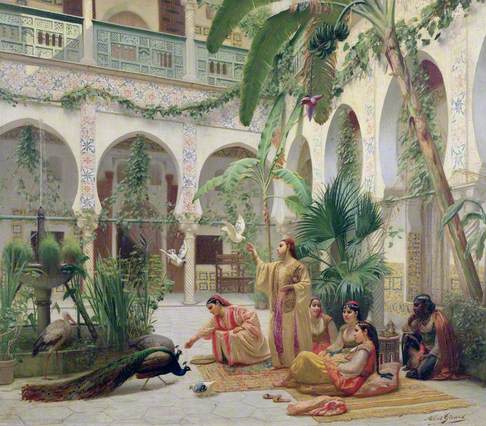 Can anybody provide information about Paul-Albert Girard, his life and career in art?

It would be great to know more about this piece in particular and the context behind it.

This discussion has now closed.

A Wikipedia article was created with more information: https://en.wikipedia.org/wiki/Paul-Albert_Girard

He seems to have painted paintings of Egyptian subjects in 1867. A painting of the same courtyard 'A Dance in the Harem courtyard' was sold at Christie, New York, 1 November 2001 measuring 62.3 x 73. 6 cm
He won the Grand Prix de Rome in 1861 in the field of 'peinture historique'
He was a pupil of Hippolyte Flandrin and Picot and exhibited at the Salon between 1859 and 1880. His name appears in Delacroix's correspondence
He painted street scenes in Algiers and Kabylie.

Studied at the Ecole des Beaux Arts from 1857 , a pupil of Jean Joseph Bellel as well of Flandrin and Picot. Painted portraits and landscapes of Normandy, Loire Valley, the Campagna, and Sicily, these being influenced by the Barbizon School and Corot, but best known as an orientalist painter and recorded in many books on orientalist painting. He exhibited at the Salon from 1859 to 1913, at the Dijon Salon from 1887 to 1910, and at the Salon des peintres orientalistes. He was made a Chevalier de la Legion d'Honneur in 1895.
All this from K G Saur, 'Allgemeines Kunstler-Lexikon', LV, 2007, p.160 which provides a very extensive bibliography

Thank you for your comments, Martin. I will add this to the artist file at Towneley Hall.

Does Towneley Hall have any information on the provenance of this picture before it was acquired? Paintings by contemporary foreign artists were regularly exhibited in the shows of the Royal Manchester Institution. Most of the catalogues of these exhibitions survive and can be consulted by appointment in Manchester Central Library, Manchester City Art Gallery and in the Library of the Paul Mellon Centre in Bedford Square

Many thanks for all your contributions to this discussion, which has proved very fruitful. The discussion is now closed.

This seems a pity when it is very easy to consult the RMI catalogues to see if this painting was exhibited there. Girard did not exhibit in any of the Gambart exhibitions for which catalogues survive in London

OK, then perhaps we should keep the discussion open for a little longer.

Towneley Hall has very little information on this painting. The original enquiry was by Siobhan, one of our volunteers, who has been working on filling some gaps. Thank you all for the information.

Albeit an aside -- what is interesting is that Blackburn Corporation bought such a painting in 1953.

It was actually Burnley Corporation who purchased it. I (Rebecca Hill) am the art curator at Blackburn Museum & Art Gallery and also Towneley Hall, which is in neighbouring Burnley. I only have one Art Detective log-in though! Towneley Hall only became a museum in 1903, so the Victorian art collection was built up retrospectively. In my opinion it is one of the stronger collections of this sort in the region. I haven't explored this properly yet, but my assumption is that the Corporation were able to get some very reasonably priced works, as Victorian art was well out of fashion by then.

Yes, of course, Burnley rather than Blackburn -- my apologies!

Pierre Sanchez has published a complete record of the exhibits at the Salons in Dijon, which could be consulted in the British Library to see whether Girard exhibited this painting there

This dates from the 1870s. It is not identifiable in the catalogues of the Salons

This painting could be compared with Gustave Boulanger's 1877 scene in a courtyard - Interior of a harem , sold at Sothebys New York 2 November 2001 lot 34

I have started a Wikipedia article on Girard:

drawing on the citation from Saur in Martin's second comment (I'd be grateful for a source for the material in your first comment, please, Martin).

I'd also encourage you all to start articles on other artists, where Wikipedia still misses them.

Has the collection now received sufficient information and sources? We can then close this discussion.

Acquisition method
purchased by Burnley Corporation with the assistance of funds from the Edward Stocks Massey Bequest, 1953