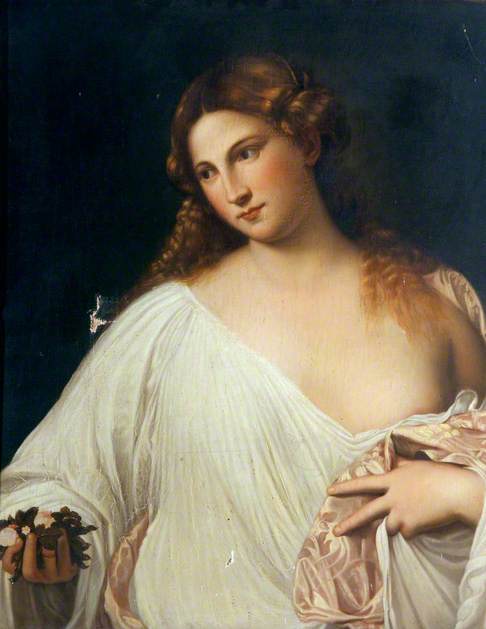 Does anybody know more about Michele Cortazzi?

'A label on the back of the painting states 'Flora by Titian copied by Cortazzi brought from Rome by ....(?) Baulay, April 1862'. The name of person is difficult to read. Also noted on the canvas is the full name of the artist.

According to internet research, Michele Cortazzi is an artist and copyist who was born in 1800, likely from Florence. We are happy with Art UK starting a discussion about Cortazzi to see if more information can be found.'

This painting is now listed as the work of Michele Cortazzi, born before 1808, died 1865.

This amend will appear on the Art UK website in due course. Thank you to all for participating in this discussion. To those viewing this discussion for the first time, please see below for all comments that led to this conclusion.

Please see attached an image provided by K. Bender at the time of proposing the discussion.

Michele Cortazzi was an old master copyist and had a studio on the Via del Corso in Rome. See attached from 'Guide to the Studios in Rome' Bonfigli, F. Salverio, 1860.

There's an article in Italian (with references) about Cortazzi here:
http://www.cilentocultura.it/cultura/cortaz/micort.htm

The few basic facts I can retrieve from the Google translation are that he was born in Ceraso some time before 1808. He moved
to Naples at an early age, and was in Rome by 1833. There are references to a painting - presumably an original composition - at the palace in Caserta, and a quotation from the critic Achille Arcasenza, describing some pictures by Cortazzi (one after Guercino) he saw in Naples in 1833.

You're right, Oliver - I was preparing a lengthy post about this! However, since the piece by Clara Schiavone you link to is about Michele Cortazzo (with an ‘o’), some evidence is required to show that he is the same man later recorded as Cortazzi. Here goes.

The first thing to note is that the following page in Tim's 1860 'Guide to the Studios ...' gives details of another artist/copyist, Oreste Cortazzi, on the same floor at the same address in Rome. One would assume they are related, but oddly Michele is described as 'Neapolitan', while Oreste is 'Roman'. See http://bit.ly/2bAiSzE . But in fact this works perfectly well for Michele Cortazzo, whose biography relates that he had probably moved from Naples to Rome by 1833, and that his son Oreste was born there in 1836.

Other Roman guidebooks record him and/or his son (just the surname is given) operating as copyists. Murray’s ‘Handbook to Rome & its Environs’ (5th Edn) lists [Cav(aliere)] Cortazzi at via del Corso in 1858 – one of “perhaps the two best copyists [with Mazzolini] of historical and large pictures in Rome”. See http://bit.ly/2bR2NsU (search inside for ‘Cortazzi’). He is there again in 1864, but has lost his accolade, and then at different Roman addresses in ’67, ’69 & ’71. He seems not to be listed in 1875, but that may be the result of a confusion with another copyist, Corazza, that is evident in two of the earlier editions. He is one of a handful of Italian painters (“mostly of copies”) in Rome mentioned in the American ‘Harper’s Handbook for Travellers in Europe & the East’ in editions of the 1860s & 70s – as late, in fact, as 1879 and even 1889 (though the relevant text seems identical to earlier editions, and may just be a reprint). And the 1865 edition of ‘Rome Seen in a Week’ gives both Michele and Oreste in a list of painters – they are still together, but at a new address: http://bit.ly/2bUDpSd

Clara Schiavone concludes that Michele Cortazzo must have been one of the scholarship-winning students of the Neapolitan Reale Istituto (formerly Accademia) di Belle Arti who received a bursary to enable them to live in Rome for a period (the ‘pensionato romano’), and study classical & old master works, along with “modern artistic trends”. For when Cortazzo (who was certainly a student of the academy) showed three works in the official 1833 Exhibition at the Royal Bourbon Museum in Naples, one of them was a “faithful copy” of Guercino’s Prodigal Son – the version that was then at the Palazzo (but now the Villa) Borghese in Rome. This is Cortazzo’s copy: http://bit.ly/2bTdqKZ . And here’s the original: http://bit.ly/2bOFe0Q . A critic covering the exhibition passed over the Prodigal (as any praise due was Guercino’s), but had significant problems with the two that were entirely Cortazzo’s work – one of them was this David-inspired depiction of Jason and the Golden Fleece: http://bit.ly/2bR8KG9 .

I’ve now found online the catalogue of an earlier (1830) Naples Exhibition at which Cortazzo showed five paintings, including Narcissus, Christ being bound to the Column, Christ Risen, and Ulysses [sic - correctly Odysseus] recognised by his dog [Argos]. Very possibly all inspired by works he had already seen in Rome – perhaps some even copies – but common enough subjects to make it uncertain whether he had already visited or not. He is not mentioned in the 1828 catalogue, suggesting this was the beginning of his artistic career, nor in 1841 or 1845 – confirming that by then he had settled permanently in Rome. He is actually catalogued as ‘Michele Curtazzi’, but the errata at the back states ‘Read Michele Cortazzo instead of Curtazzi’. See http://bit.ly/2caceSp

One might suspect a deliberate change of name, but for a similar fluidity of form in official Naples civil records. In April 1862 a certain ‘Pasquale Cortazzo’ (perhaps a relation) is recorded as marrying ‘Raffaela Bandi’ – but when he dies less than two years later his surname is spelt ‘Cortazzi’ and hers as ‘Bando’. Very odd – but an Italian friend tells me that spoken in a strong southern accent, “Cortazzo” could easily be mis-heard as Cortazzi or Curtazzi, and vice versa – the final letter/syllable is often half-swallowed and indeterminate. Think ‘The Godfather’! So we don’t really know what his original name was – perhaps he reserved ‘Cortazzo’ for his original works, later adopting ‘Cortazzi’ when financial need forced him to become a copyist for the tourists. However his son Oreste (b 1836) retained the later spelling when he moved to Paris and became rather better-known than his father for his own work, exhibiting with some success at the Salon and elsewhere (including London) from 1870 and through the 1880s – this from another biography that Dr Schiavone wrote of him: http://bit.ly/2bQTk4V

A correction: the son Oreste reverted to 'Cortazzo' when he moved to Paris, and exhibited under that name.

In fact Michele Cortazzo [sic] died at Rome on 26th Dec 1865, his wife Maria Christina Tassi just 12 days later. His son Oreste placed a memorial to them "with tears" in the floor of the Church of S. Andrea on the Via Flaminia. Unfortunately no year of birth or age is given. See: http://bit.ly/2bRS5zy

Proof that the Michele Cortazzo who died at Rome in 1865 is our man comes from the 'Acte de Marriage' of his son Oreste in France. On 18th May 1886 were married, at Neuilly-sur-Seine, Marie Bonte and Oreste Cortazzo, 'artiste peintre' of Bvd Victor Hugo 39, born at Rome, Italy, 26th April 1836, eldest son of Michel Cortazzo and of Catherine Tassi, his spouse, both deceased. Oreste's evidence of birth was provided by a certificate delivered by the Italian Consul. See attached. ['Catherine' is correct - the memorial stone in Rome actually reads 'Maria Caterina Tassi', not 'Christina'.]

The same source that pointed me in the direction of this marriage states that Oreste had previously married (and later divorced) in Pennsylvania, USA, in Sept 1866, but had returned to Europe for the birth of his daughter at Paris in May 1868; and that he died in Spain in 1896. I shan't bother trying confirm this from primary sources, but the implication is that Oreste moved to the States soon after his father's death, and thence to France (where he was exhibiting by 1870). So all those guidebook descriptions of the copyist Cortazzi in Rome in the late 60s-80s would seem to be erroneous - presumably the result of sloppy or non-existent editing of later editions.

Another small correction. Oreste was not the 'eldest son' of Michele - the phrase 'fils majeur' I took as meaning that actually means he was over 21 at the time of his marriage.

Clara Schiavone was right. Michele Cortazzo was one of two winners of the Naples Institute’s ‘pensionato romano’ bursary award for painting in 1830, according to ‘L'Accademia di belle arti di Napoli (1752-1952)’ by F. Le Monnier, [1953]. Snippet view: http://bit.ly/2bXED1s . They were apparently awarded every four years. And as well as the 1830 catalogue already described (in which Cortezzo is ‘del Real Istituto...’, i.e. a student there), I’ve now found online two further catalogues for exhibitions at the Royal Bourbon Museum in Naples, 1833 and 1835 (they were held every 2-3 years). Dr Schiavone clearly hadn’t seen any of the actual catalogues when she wrote her piece, just the review of the 1833 one: Michele Cortazzo exhibited at both, and beneath his name in the 1833 one it says he is ‘alunno’ of the Royal Institute of Fine Arts, and ‘pensionato in Roma’. In 1835 he is an alumnus as before, and now ‘già pensionato ...’ (i.e. formerly). All of which gives us a fairly good chronology of his art training in Naples and Rome, though we don’t know exactly when he entered the Institute – presumably at least a year or two before 1830.

In the 1833 catalogue more detail is given of the Guercino Prodigal Son copy: it was a full-size replica of the one in the Galleria Borghese. And one of the two he exhibited in 1835, ‘La Carità Romana’, is the picture mentioned by Oliver now in the Caserta Palace: http://bit.ly/2cjHNfx . Another group of obscure books online, the ‘Annali civili del Regno delle due Sicilie’, reveals that he won silver medals for painting in 1833 and 1835 – see http://bit.ly/2cuVjht and http://bit.ly/2bIBUXE . These were probably for ‘Jason & the Golden Fleece’ and ‘Carità...’ respectively, as both ended up in the Royal/State collection.

For anyone interested I've put together a PDF (attached) of the catalogue pages covering his exhibits at the Real Museo Borbonico 1830-35.

Some interesting evidence that Michele was an active and respected copyist as early as the mid-1840s. On a visit to Florence in 1845, the palaeontologist Richard Owen (who coined the term ‘dinosaur’) was given permission to have a replica made of the Pitti Palace version of Lely’s ‘warts and all’ portrait of Cromwell. The artist, recommended by the Grand Duke himself, was Michele Cortazzi [sic]. See: http://bit.ly/2bJi37R . This also lends support to the hypothesis that ‘Cortazzi’ was the name he used when copying.

Thank you for all this research we have added the findings to our inventory record on this piece.

We can conclude this discussion by asserting that this is a copy of Titian's 'Flora' in the Uffizi Gallery, Florence signed by the artist Michele Cortazzi, who died in Rome in 1865. There have been other useful contributions about Cortazzi's career during the discussion.