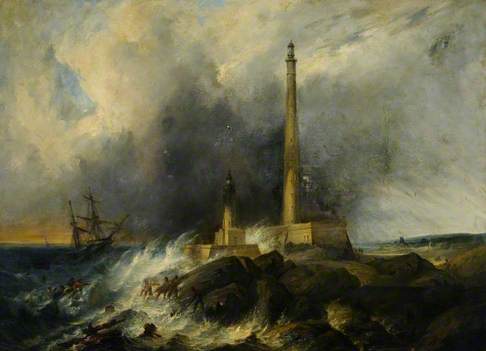 This rather large and dramatic view is certainly not of the Eddystone Lighthouse: but is it a structure that ever existed at all, and if so where (though the background suggests intended at British)?

I am also not convinced it it by Stanfield, though skilfully dramatic in a style not too far from him (perhaps another painter of north-eastern origin?).

As to subject it looks like a romanticised variant of this rather sketchy Sunderland piers view, attributed to T. M. Richardson the elder: http://bit.ly/2baDQZK. Though hardly typical of his usual subjects and treatments, he was a north-eastern man (while Stanfield was only born, not practising, there).

The following is a rather more realistic rendering of the location: http://bit.ly/2aQQyKX

Any reference to 'W[illiam]. Clarkson Stanfield' suggests misinformation, though a very old error pointed out as long ago as his original DNB entry in 1893. Based on long familiarity I doubt it is by him, either on subject or style, and – were it – it's a big canvas not to have an evident exhibition or sale record. Bingham also rings no bells as a collector name so further thoughts on subject, hand and history would be useful.

'The attribution was based on the information on the reverse of the painting 'Bingham collection / W. Clarkson Stanfield / Eddystone Lighthouse / 56" x 41" canvas / Serial no. 211'. This painting has not been the subject of further research so any associated information would be welcome.'

This painting is now titled 'The Lighthouse at Gatteville, near Barfleur, after a Storm' and is listed as attributed to Jean-Louis Petit (1795-1876).

These amendments will appear on the Art UK website in due course. Thank you to all for participating in this discussion. To those viewing this discussion for the first time, please see below for all comments that led to this conclusion.

Pieter, the smaller light and its associated buildings are reminiscent of the Longstone lighthouse on the Farne Islands. The tall light is an invention, as is the distant, sandy Northumberland shore, which I doubt would be visible from the outer Farne Island.

Apologies, I believe that you can see the Farne Islands from Bamborough Church (where Grace Darling is buried). So the distant image of a church might be meant to be Bamborough.

You might get somewhere if you approach a Trinity House archivist. That's because multiple lights were common before the flashing design arrived. Their relative orientations would distinguish them from neighbouring locations.

In addition, the blackening of the smaller lighthouse suggests a coal-fired station. Don't assume this means a coal-mining area: there was once such a station at the Lizard.

Of course, the orientation may be subject to artistic licence, and the design of the taller lighthouse looks fanciful.

When researching for my little book Lighthouses, Towers of the Sea, National Trust 2005 I had great fun trawling the fanciful sort in art. I and my NT collaborators Margaret Willes and Sam Wyndham chose one good example by Claude -Joseph Vernet, Harbour Scene-Morning 1751, now at Uppark, as a frontispiece. Verney did this scene to death in many variants I think. But...there are lights similar eg Ile Vierge, Finisterre, France. A much better stab would be Phare de Gatteville at Gatteville le Phare, France for is is also double is a magnificent 75m tall and has a base reminiscent of the painting. More to the point it was built in 1835 to replace a tower on the site of 1734. Nevertheless, I would say that the painting under query falls firmly into the fanciful genre for the period concerned.

Here are two pics of the lightouses above mentioned

Looks a bit fanciful (height of tower exaggerated), with figures trying to clinging to rocks. Is that an English church tower in the distance?

Gatteville looked very convincing, with the same number of windows on the tall lightouse and the three stages on the lower. Then I found two versions of a painting showing Gatteville lighthouse by Jean-Louis Petit, identical to Sheffield's. One is in the Musée Thomas-Henry, Cherbourg, https://commons.wikimedia.org/wiki/File:Jean-Louis_Petit-Le_Phare_de_Gatteville.jpg. Another is at http://musee-maritime.patrimoine.manche.fr/objet.php?obj=006_01_023.

Yes - bravo: an unusual subject-led discovery which we could have chased a long way bandying artist names and getting nowhere. Nice to find an unfamiliar French item so deep in inland UK too: I wonder how it got there. Can anyone elucidate on the Bingham collection, or rather which Bingham collection it might have come from - that still in Cirencester today (Daniel Bingham) or another?

Jean-Louis Petit's dates appear to be 1795-1876 but he doesn't have a high internet profile, even in French, compared to various others past and present of the same name. 'Landscape and view artist who studied with the painters Regnault et Rémond. He exhibited at the Salon from 1812 to 1832, showing landscapes and historical scenes, and painted canvases of Cherbourg, Granville, ports in the Channel, of the island of Jersey and of Paris.' (trans. from http://www.universdesarts.com/biographie/3970/petit-jean-louis.html)

Could we sign this off as main issue resolved (thanks to Charles and Andrew) with clarification of the Bingham provenance left open should anyone have a future answer?

The title should clearly be something like the French one: 'The lighthouse at Gatteville, near Barfleur, after a storm' (since there's clearly wreck, rescue and salvage going on) and the artist Jean-Louis Petit (1795-1876). Barfleur is on the north-west of the Cotentin peninisula, Normandy, not far from Cherbourg.

Thanks, Pieter. On the basis of the various images available and our limited knowledge of his work I would be hesitant to say that the Sheffield painting is definitely BY Petit. I would recommend 'Attributed to' or 'After'. What do you think?

My impression from the images available is that the Sheffield canvas is a version of that in the Musee Thomas Henry at Cherbourg as reproduced in the wiki image, but I think the call rests with Sheffield depending on how far they want to go at this point: the other you found is clearly a cruder copy

Shall we formally recommend that the title is 'The Lighthouse at Gatteville, near Barfleur, after a Storm' and it is by or after Jean-Louis Petit (1795-1876). It is a version of his painting in the Musée Thomas-Henry, Cherbourg, which may be the one exhibited in 1839 at the Salon des Artistes français de 1839, as 'Phare de Gatteville, près Barfleur, suites d'un gros temps'.

That's fine: while one might assume the Musee Thomas-Henry has the exhibited version, that is something that also needs to be checked- it might be the other way round. I've not found a sufficiently detailed web-page for them to chase further but expect they would be interested to discuss anyway.

I have to say I am deeply impressed and how tickled I am to play a small part. Blessings to all

Thank you so much for this fantastic information.

We are happy for the title and artist to be changed, as suggested, to 'The Lighthouse at Gatteville, near Barfleur, after a Storm' after Jean-Louis Petit (1795-1876).

I suggest you pursue with the museum in Cherbourg: my money is on one or other being an autograph version by Petit of, presumably, a successfully exhibited work of 1839. He's so little known why would anyone of such close quality copy him, and at such a large scale: Andrew has already produced one inferior copy, which is much more the sort of imitation one might expect from a third party.

Taking the last two comments above into account would you see if this can be wrapped up: I recomend 'attributed to' Petit rather than 'after'-which leaves the matter open until closer enquiry can resolve but its Sheffield's call.

The collection has contacted Art UK and is happy for the painting to be attributed to Jean-Louis Petit.

Title
The Lighthouse at Gatteville, near Barfleur, after a Storm