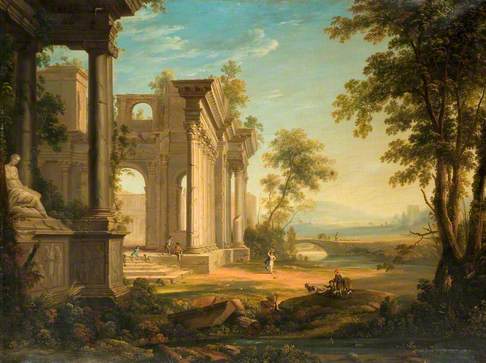 Is this a good variant copy of the painting by Pierre Patel the elder that was engraved by Vivares when it was in the collection of William Fawkener (Natalie Coural, 'Les Patel', Paris, 2001, cat. CP 1-a)? Or is it Fawkener's actual picture, overpainted in the foreground (which is where the only variations are), and by Pierre-Antoine Patel, rather than by his father?

Coural assumes from the painting at Wallington (which I included in 'In Trust for the Nation' at the National Gallery in 1995 with an attribution to Patel the elder [exh. cat. no. 38] – an attribution that she has rejected) that Fawkener's painting was in the reverse direction to the print. That seems plausible, whether one accepts the painting at Wallington as Fawkener's (the engraving of which I was unaware of in 1995) or as a copy of it. Its handling seems quite different (and characteristic of Patel the elder) to that of the picture in The Potteries Museum, which – to judge by the illustration of it online – looks more like that of Patel the younger, but he is unlikely to have copied an English engraving of one of his father's pictures, so one must probably presume that it is a skilful English copy of the print, either introducing its own variations into the foreground, or subsequently repainted in that area.

The Potteries Museum & Art Gallery note: 'The only other information we have on this painting is that it was purchased locally in 1950. It would be very interesting to find out more.'

Without commenting on whether the original was painted by Pierre Patel or Pierre-Antoine Patel, it seems probable that this copy was painted a good deal later than the younger Patel. One can't be absolutely sure from the small image, but the precisely articulated detail of the architecture, figures and landscape and the transparent tonality of the sky seem more typical of later eighteenth century painting than the broader, more atmospheric technique of the Patels, especially the older Patel.

I found this online, a reversed version of the picture attributed to Pierre-Antoine Patel, but unfortunately I cannot ascertain the source:

The picture that you have found an illustration of is the one that I was referring to, as being in the collection of the National Trust at Wallington. Until I can see it in the flesh, to see, in particular, how much it may have been overpainted, I should not like to comment further on its authorship or period.

The Wallington Patel is a reverse of your picture. I have an engraving by Francois Vivares done in 1762 which looks exactly like your painting with the legend : "Engraved from an original by Patel in the Collection of William Fawkener Esq" Maybe not helpful but perhaps interesting

Chris, with all due deference and respect, your engraving above includes many more figures in the foreground that are not present in this discussion's painting, in particular the cattle and goats and their drovers and goatherds. There is also in the engraving additional foliage covering the frieze under the seated sculpted figure and the two pillars on the left hand-side of the image. More subtle differences can be seen on closer examination. To say, therefore, that it "looks exactly like" is not really accurate.

If the engraving dates from 1762, did a lazy copyist turn out this discussion's work at a later date, or does this painting pre-date the engraving?