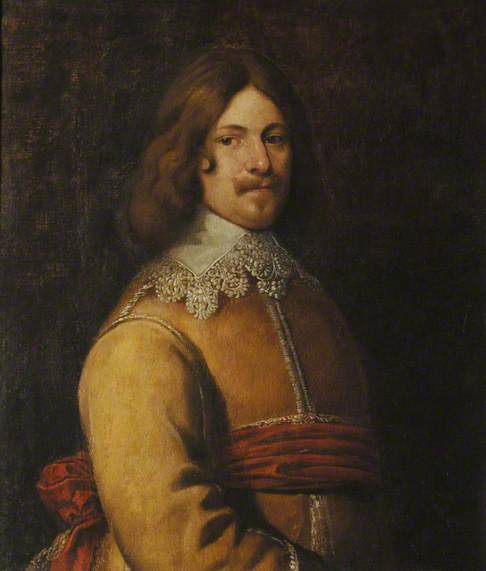 This picture was bequeathed to Trinity College in 1974. It was 'ascribed to Samuel Cooper', and the donor, who lived in Leamington Spa, was distantly related to Henry Ireton. But there is no good provenance as to how the family acquired the portrait, and doubt has been raised as to the identity of the sitter. Although in all the other portraits of Ireton that appear on Your Paintings, he is wearing armour, in this portrait he is not. Moreover, the colour of his sash seems nearer to the red of a royalist officer than the orange of a parliamentarian. Is the collar unusually lacy for a parliamentarian general? Any insights about the subject of the painting, the facial likeness or otherwise to Henry Ireton, or the artist, would be very welcome.

The title has been amended to 'Portrait of an Unknown Man', the following additional title information has been added: (formerly identified as Henry Ireton, c.1611–1651, Parliamentarian General and formerly attributed to Samuel Cooper, 1609–1672), and the artist has been changed to 'unknown artist'.

what are the dimensions?

oh sorry, just realised they are online but hidden!

Cooper did a miniature of Ireton (known through a 19th century copy at the Fitzwilliam, see here: http://data.fitzmuseum.cam.ac.uk/id/object/17969 ) which seems to have been the basis for several of the oil portraits. I'd say your artist is definitely not Cooper. The sitter probably isn't Ireton either, sorry I know that is 2 out of 2 but the face is a different shape. The face is a lot better than the rest of the figure, which is really quite badly drawn.

do I win the prize for being the first contributor on this thing?

You would be very welcome to come and visit the painting in person - but I'm not sure that counts as much of a prize!

The painting is certainly not by Cooper, but I cannot help you over the identity of the sitter

The red sash was often used by King Charles I's Royalist troopers. The Earl of Essex's parliamentary forces wore a tawny orange sash, but these were not universal - David Perry's 2003 'Notes on ECW uniforms and equipment', Partizan Press should provide some information

It may be of interest when considering this work to know that a painting was sold in the London auction house, Fosters, on 7 April 1886 lot 111 attributed to Dobson as described as of General Ireton
An attribution to William Dobson, if it was of the painting under discussion, or of another version, would quite understandable in 1886, when dealers, collectors and historians had not yet made much progress in establishing his style

I can see why doubts exist on Ireton. The provenance link to him would seem to be discounted by Martin's finding of the sale history.
As Richard says, it isn't by Cooper alas. There is a Cooper-ish look of the face, which means it could be an oil enlargement of a Cooper miniature. But I've had a look through Daphne Foskett's 1974 Cooper catalogue (the largest published source of Cooper illustrations) and there is no match for the sitter. Probably a sitter of the 1640s.

Please note RM's recent comments on the discussion of The Forge of Vulcan, which apply to this picture. Can they be transferred to this discussion by Art Detective/PCF

The man in this portrait is wearing a buff coat, a military sash, lace cuffs, a linen and lace collar.

It's difficult to be precise about which side wore what during the Civil War because neither the Royalist or the Parliamentary side conformed to the stereotypical images entirely. There was no standard uniform, there were numerous turncoats, clothing was stripped from the defeated side, and as the war wore on, money ran short and the Parliamentarians controlled London and foreign imports, the poor old Royalists holed up in Oxford and the South West had to make do with what was available (which is why they didn't have helmets).

The buff coat offered some protection and was often worn under armour. This man's is thick which suggests quality, with integral sleeves, but undecorated with gold thread or buttons. The finest quality buff coats were expensive,, costing more than armour so they were worn by officers, cavalry, London trained bands and were issued to a minority of musketeers in the pike and shot formations to give them some protection during hand-to-hand combat. From what I've seen Royalist buff coats tended to be more ornate than this one with highly decorated sleeves. See,
Portrait: http://www.nationaltrustcollections.org.uk/object/1276692
Original: http://www.visitnorthumberland.com/news/2014/03/17th-century-military-buff-coat-to-be-conserved

The Military Sash is a wide colorful sash designating rank and/or regiment, often worn diagonally across the body, right shoulder to left hip, where it was tied in a large bow or could also be tied around the waist. This man's looks red or browny red with a (gold?) lace edging. The Royalists generally wore red sashes; pre 1645 and the formation of the New Model Army, the Parliamentarians generally wore tawny orange. The only contemporary reference to New Model Army uniforms is in the Calendar of State Papers Domestic for 1647, which records an agreement to order coats "of the Venetian colour, as before". Ie. brownish red.

One other possible avenue of investigation is the Parliamentary Red Regiment of the London Trayned Bands.

If you want to know more about the uniform, you could try the English Civil War reenactment group, The Sealed Knot, http://www.thesealedknot.org.uk. Mor of course the Royal Armouries.


His collar is a high, linen, edged with what looks like Gros Point, Venetian needle lace in a baroque floral style; the most expensive and sought after. The collar is neither the austere design of the parliamentarian Puritans, nor the ornate style of the King. The Lace Guild or V&A museum could tell you more about this as well as the lace on his cuffs and sash.


The other thing to consider is that he's not an English Civil war soldier, but a continental Civil Guard.

I'm not sure that Dobson can be ruled out entirely. For me, everything under the neck is over-painted at a much later date. There seems to be some hints of quality in the face.

Dobson's depictions of royalist officers typically showed much more glitter and silk. An interesting comparison is the Knole House painting 'A gentleman with a page boy', which shows his typical highly reflective handling of the silk sash and glittery treatment of clothing. Although, as suggested bt Tim Williams, this could have been lost as a result of extensive overpainting.

Also note the colour of the sash can often be misleading. Edward Bower's portrait of Denzel Holies, a well known Parliamentary officer, portrays him with a red sash (attachment courtesy of Philip Mould: Historical Portraits).

I'm a Dobson scholar (personal interest, not professional, sadly!) and I agree there's something Dobson-like in the face, mainly in the eyes, but I'd need more convincing. The body doesn't fit with the head - the buffcoat is quite poorly executed in comparison with what's above the neck. That doesn't have to mean it's from a later date, though, it could just be that the artist (whoever he was) painted the face, and the body was completed by an assistant.

Also, bearing in mine that Dobson was working for the King, if this were his work we would certainly have to question the attribution of Ireton as the sitter, since he was serving under Parliament. It's extremely improbable that the Royalist court painter would be producing Parliamentarian portraits while in the King's employ.

Strangely enough I was at the National Portrait Gallery this morning and saw their portrait of Ireton (attrib. to Walker, after Cooper and Van Dyck), which doesn't, in my opinion, show much resemblance to the man here.

There is the possibility that it was an unfinished Dobson, head only, finished after his death in 1646 by another. Perhaps deliberately portrayed ambiguously as parliamentary forces were now in power. Pure speculation of course. Who acquired his effects after his death? Dobson usually painted on a relatively square canvas but of course canvas can be altered afterwards.

Dobson's effects would probably have gone to his wife, Judith. It's not unlikely he left unfinished canvases when the Royalists evacuated Oxford, which could have been 'recycled' by another painter after they left.

Is there any evidence the above canvas has been cut down? The right arm seems oddly cut off. I can't find any in Malcolm Rogers' 1983 Dobson exhibition catalogue where the arm is similarly truncated. Either he showed the whole arm and hand, or only the upper body down to the middle of the upper arm. This seems to fall in between the two.

I agree Ros, I think the right arm is a much later invention, I wouldn't be at all surprised if there is an arm underneath that was a little further to the left and straight - like in this Johnson:

It's possible that the costume was added to look royalist for whatever reason - it's just so crude compared to the face.

In almost every respect this is, at the moment, a second-rate work. The generic treatment of the hair and uniform, the unconvincing anatomy in the body - particularly the shoulder, and the inept detailing of the costume (note how the central line of the tunic seems twisted to the sitter's right), all suggest an author of little talent.

The head seems to be better than the rest though the chin is poorly rendered and the form of the large almond-shaped eyes and perfect eyebrows seem untypical: it makes me think this is actually a 19thc work.

There is too, a general - though idealised - look of Dobson himself about the "sitter".

Trinity College is grateful to everyone who has contributed to this discussion. The insights into the portrait have been extremely interesting.

In one way it seems appropriate that we no longer know the identify of the sitter or the details of the artist. Trinity was home to a shifting population of temporary residents during the Civil Wars, and for several years there are almost no written records. Perhaps this painting can be a representative of the many unknown men who passed through the College.