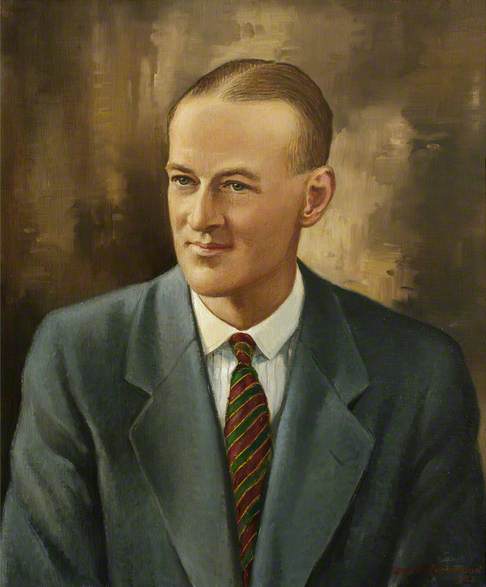 I'm curious if this Louis E. Brandon is the art dealer who had locations in Boscombe and Leeds in the early 1930s – who also changed his name from Louis Earle Badansky to Louis Earle Brandon in 1925. Same man? I've attached a couple of snippets from the London Gazette.

The collection has added a reference to its database regarding these linked articles. It has also checked the name of the artist against various sources. The collection comments that the name is an unusual one and is in the right period and a related business, but it is also odd there is no reference anywhere to a portrait painter called Brandon. We cannot be sure the dealer and the artist is the same person unless we can find evidence of this. Intriguing!

The 1911 UK census lists Louis Badansky, aged 19 (b.1892), as living at 54, Samuel Court, Leeds, with his Russina Jewish parents and Leeds-born siblings. His occupation is given as a worker in a photo enlarging business.

On Tuesday 31st October 1916, an advertisement appeared in the Yorkshire Evening Post which read: "Houses Wanted - Modern house required in Chapeltown district, no cellar kitchen, rent up to 30 pounds and rates. - Apply Louis Badansky, 6, Wade Street (Leeds)." Between 1916 and 1923, this address was also the one for Badanski & Sons, Wholesale Bespoke Clothiers

In 1925, Louis Badansky's address in the phone book is given as 18, Hamilton Avenue, Chapeltown, Lancashire (30 miles south of Leeds).

On the 18th September 1925, the London Gazette entry appears, as posted above, announcing the artist and art dealer Louis Badansky's intention to change his name by deed poll to Louis Earle Brandon, the address given as 18, Hamilton Avenue, Leeds.

On the 29th September 1939, the National Register listed Louis E. Brandon and Edith A. Judd (born on the 14th March 1903), he being hotel manager and she a manageress. Their address was 89, Manor Road, Bournemouth, Hampshire.

On the 26th April 1947, Louis Brandon departs Liverpool for New York on the SS Mauretania, aged 54. His address is given as "2, Queensbury Road, Parsonage, Hants", and his occupation is given as "artist".

On the 26th August 1948, he was registered as arriving in Southampton from New York, on the SS Queen Elizabeth, aged 56 (b.1892), with an address at "3, Queensbury Mansions, Portsmouth Road, Bournemouth". His occupation is given as "artist".

On the 2nd February 1973, the probate is registered of the will of Louis Earle Brandon, of Donisthorpe Hall, Shadwell Lane, Moortown, Leeds, who died on the 9th December 1972. He leaves £3,371.

Does any of the above suggest that this is the life chronology of one man?

I can't see any problem with that being one man, Kieran - the address from the 1925 phone directory is in the northern Leeds suburb of Chapeltown, rather than the one in Lancs (and is thus the same as the one in the Deed Poll notice).

There are just a handful of things to add to your comprehensive biography. Louis's father Simon was naturalized a British subject in April 1914, his elder brother Maurice or Morris (b.1889) in July 1948 - he was the only one of Louis's siblings not born in the UK, and was also known as 'Brandon'. They must have arrived in England in 1890/91, though I can't see them in the 1891 or 1901 Censuses.

Louis and his first wife Marie had two daughters, both Leeds-born - Zona [sic] in 1915, and Barbara in 1920. By 1922 (Electoral Reg) they were already living partly in Bournemouth (but also in Yorkshire), and another (?)Gazette cutting Paul McDougall has posted on Ancestry suggests Louis was in some financial difficulty by 1929. His parents moved there, too, in the late 1920s (Elec Reg from '29), his father dying in Christchurch in 1937 and his mother in 1947 back in Yorkshire.

By the 1939 Register Louis & Marie had separated, but she too was living in Bournemouth with the two girls (at the address from which Barbara married the same year). Louis and Edith Judd seem to have been living as common-law husband and wife, as although she is given as 'widowed', her surname of 'Judd' is actually crossed out and replaced with 'Brandon' in the original register. Marie died (Poole Reg District) in early 1942, and this of course allowed Louis and Edith to get married after the war without the need for a divorce.

I don't have a problem with Louis being the artist of the portrait either - he describes himself as 'artist' several times, in 1925, 1947 & 1948...and in fact on the outgoing trip to NY in May 1948 (for which you give the return journey in Aug), again on the Mauretania (he took Edith this time, but she's on a different page), he is specifically called 'Portrait Artist' - image attached. He was clearly a part-time one, and of fairly limited abilities (and probably had no training). I rather suspect the painting derives from a photograph - indeed with his experience in photographic enlargement it may even be painted over one.

How he came to paint Irvine we may never know. I don't have time now, but it might be worth checking all the passengers (in all classes) on his two trips to/from NY. Oh, hang on...I see that Henry Q Forbes-Irvine married Margaret S Bond at Poole in 1947Q3 - perhaps they had a house down there too.

There is a Chapeltown in Leeds

sorry- I see that Osmond has already pointed this out above

His address is given as 87, Sandringham Drive, Moortown, Leeds in his first wife’s death notice (1942) as well as in an advertisment in which he offers his services as portrait painter (1951).
Osmund has already suspected that this portrait derives from a photograph: Brandon’s ad states that he is “specialising in painting portraits from photography only. No sittings required.”

Andrea, that is fantastic research, and added to Osmund's excellent update and correction of my own initial suggestions, really starts to put a shape on the man. One interesting date that I came across was that a Louis E. Brandon is listed in the British Army WWI Medal Rolls Index Cards on Ancestry as having been a Private in the Army Service Corps (regimental number T4/071481). See attached. Someone more expert than me (and I am not nearly that) might be good enough to decipher the various entries on the card. The latest date on the card is 1919, six years before Louis Earle Brandon's 1925 application to have his name changed from Banansky. Could it be that as a descendent of a Russian Jewish family he was obliged to change his name for the purposes of enlisting or being drafted for war service?

Also, in regards to Osmund's observation that Louis's wife Marie had her surname of 'Judd' crossed out and replaced with 'Brandon' in the original register, it has been my experience with the 1939 Register that these types of corrections were made several years after the initial registration of the original information, most times after the second world war had ended. Given that Louis married Marie in 1949, the addition of her married name of Brandon might well have been made after this latter date. This suggests that the pair were living in some sort of close but not married relationship for at least ten years.

In addition to Andrea's attachments above, the attached advertisement appeared in the Yorkshire Post & Leeds Intelligencer of Friday 14th January 1955.

The attached notice appeared in The Manchester Guardian of Wednesday 16th September 1953. This was the year in which this discussion's portrait was painted.

Additionally, the attached is taken from The Manchester Guardian of Friday 20th September 1946. Louis E. Brandon takes over the sole management of the Hotel Trouville, Priory Road, Bournemouth. In April 1947 he heads for New York.

That point about alterations to the 1939 Register is new to me and very interesting indeed, Kieran, thank you - as are all your other finds. I'd wondered about the RASC Louis E Brandon, but without an address or age couldn't be sure (there are one or two other possibles with the same name & middle initial) - your 'sensitive name' observation is valid, as although Russia was our ally in 1915, his name sounds Polish...and much of Poland was at the time split between Germany & Austria-Hungary as well as Russia.

Andrea's finds are invaluable: portraits by post, golly - so he may never have met Irvine at all. And an interesting domestic set-up, it seems (though not unique): Louis apparently lives/works with sort-of-wife #2, while wife #1 lives nearby with their daughters (one married, the other already living with her husband-to-be...a professional steeplechase jockey and RAF pilot, no less - see attached); and when #1 dies, she is still described as Louis's "beloved wife". And then a few years later he and #2 get married legally. This may possibly all relate to the demands of orthodox Judaism and/or maternal disapproval - I note that his remarriage to Edith in early 1949 (and also his brother's 1948 naturalization) happened shortly after their mother died in mid-1947.

Louis's second marriage was not to last very long. Edith died in Oct 1954, her address also given as the Sandringham Drive house in Moortown, Leeds (Moortown had by the 1940s replaced the more central suburb of Chapeltown as the centre of the Jewish community) - but her place of death at a big Brighton hospital suggests an ongoing relationship with the south coast. In the administration granted to Louis (attached) he is again described as "portrait artist".

The following year he remarried for a second time, to a divorcee Rose Stone (née Nathan), in 1939 a fur saleswoman - perhaps she had answered Louis's ad for a "lady representative" after Edith's death. Louis outlived Rose, too, as she died in Dec 1964 - the address given (Kings Croft Gdns) being a new one, but still in Moortown. As Kieran said, the thrice-widowed Louis died in Dec 1972 at Donisthorpe Hall - not a sign of sudden wealth, sadly, but the name of a well-known large Orthodox Jewish Care Home just a few minutes' drive from his last address.

Osmund, a good explanation as to the nature of the amendments to the 1939 Register can be found here:

Also Osmund, in your first attachment above, you can see on the right hand column of the page that there is an amendment made and is dated 24/04/1948, illustrating the point that the register was updated after the initial registration date in 1939.

Most interesting and helpful, Kieran - thank you again. I shall save the whole page with all that info in case it ever moves or is deleted.