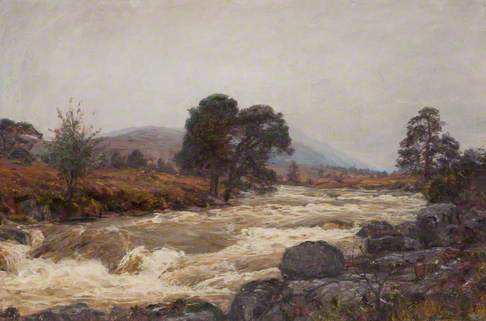 Could this be one of the pictures of this title which Alexander Brownlie Docharty exhibited at the Royal Glasgow Institute of the Fine Arts?

The collection says that, regarding the history of the work, the provenance before 1909 is unknown. The work was purchased by Peter Henderson Mackellar (1832–1912) at the Greenock Art Club exhibition, October 1909.

This discussion is now closed. Unfortunately, it has not been possible to ascertain the execution date.

As the painting passed by bequest from Mr Mackellar's estate to the collection in 1913 it would appear unlikely that it was offered for sale at the RGI exhibition in 1918. My guess would be that the painting bought by Mr McKellar at the Greenock Art Club exhibition in 1909 was exhibited at the RGI earlier in 1909 and was unsold at that time. This is of course a very typical work by Docharty and having checked the titles of a large number of his oils I cannot find another with the exact same title. One will never really know whether RGI exhibit #521 is indeed the painting in the collection, in the absence of any labels or inscriptions which I imagine are not present, but there must be a probability that it is the 1909 picture.

An article entitled 'The Highlands of Scotland', by J. Taylor, and illustrated by A. Brownlie Docharty, in "Sketching Grounds" (The Studio, 1909), as edited by Charles Holmes, illustrates, on page 104, a painting by Docharty entitled "Spate in Glen Moriston. Perhaps it is this article's painting, rather than this discussion's painting, that was exhibited, as catalogue number 521, at the Royal Glasgow Institute of the Fine Arts.

This discussion started three years ago and received two comments before it petered out. Without more information it is difficult to ascertain if this version of 'Spate in Glen Moriston' by A B Docharty was exhibited at the Royal Glasgow Institute of the Fine Arts. As Kieran noted above, there was another version of the subject which was included as an illustration in the 'Sketching Grounds' special edition of The Studio (1909). Without more information I recommend closing this discussion.

Thank you, Michelle. It's unclear to me whether the back of this picture was checked for labels etc at the start, so I've sent a quick email to the collection. We will close this discussion after another week (by end of 15 March) unless significant new information comes to light this week.

The collection has no additional information about this painting on their database, but someone will check the back of the painting this week.

This discussion has been live for three years and has produced only two responses – Grant commenting that since this was a favourite haunt of the artist and a typical work, it would be difficult to be certain if it was that exhibited either in 1909. Kieran then supplied the link to the Studio Special Number on Sketching Grounds which shows a different painting of the same subject. Since this was published in 1909 – it would seem possible that it could also be Docharty’s RGIFA picture. Could the exhibit have been illustrated? From memory Glasgow Institute catalogues were illustrated by this date. Does the Mitchell Library have the relevant item?
Even if it cannot be given a Glasgow exhibition history, the picture is not without interest. Heather hills, ‘burns’ and bogs had been stock-in-trade for Scots landscapists for most of a century – reaching their heights in work of Horatio McCulloch, John MacWhirter and Peter Graham in a phenomenon known to art historians as ‘Highlandism’. This type of landscape, as John C Morrison has pointed out, was a signifier of Scottish national identity. That it endured through the years of the Glasgow Boys, when lowland, and indeed, English landscapes were preferred, is one of the key points of interest in the present work. Significantly, Taylor in the Sketching Grounds essay refers to the “45”, Walter Scott and the Jacobite connections that make Glen Moriston a place of ‘glamour’. In the absence of further information from the Scots art history fraternity, this discussion must now be closed.

Thank you, Kenneth. In March the collection mentioned that someone would check the back of the painting. I've sent another request before we close.

Prior to the first lockdown the collections had only just been returned to the Watt after building works and there is still much reorganisation to be done by the small staff. We've agreed on closing this discussion.

The curator will let me know if anything is found on the back later, but in the meantime, thank you to Martin for trying to help us find the date of execution.