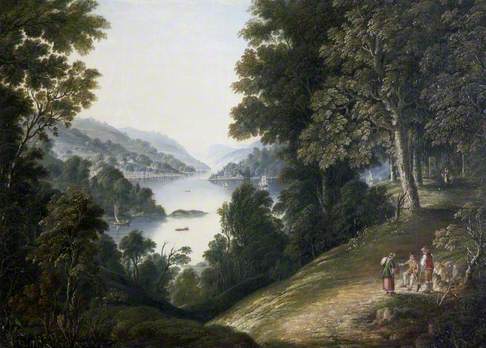 However, are we sure that this is by Edward Tucker? He always signed ‘E TUCKER’. I cannot see a signature in the present image, and this is not a typical Edward Tucker.

Art UK adds: The collection hopes that Art Detective may be able to confirm its own research with a definable provenance on the picture. A label identifies the artist as ‘Edwin Tucker’ and the date as 1835. It was purchased by the Friends of Dartmouth Museum from A.R.t.(?) Investments, 124 Brompton Road, London SW1 on 22 May 1963 for £240.

The attachments consist of Art UK’s high-resolution image; the collection’s Authority File associated with this painting; an obituary of Edward Tucker in the ‘Westmoreland Gazette’, 18 June 1898; Bristol census of 1861 listing the family of Edward Tucker, watercolour artist (age 44); Tucker family members listed in 1890.

For what it may be worth, this looks like the work of a topographer, such as a painter-engraver of views. I am not making or suggesting an attribution, but William Daniell (1769-1837) was such a person, and there are at least couple of Dartmouth views by him published as prints in 1825 (British Museum, see below):

Daniell has works on Art UK.

It appears that Edward Tucker was a watercolour artist, though I suppose he might also have worked in oils:

Edward Tucker started his career under the instruction of Thomas Woolnoth, the engraver.

Charles E. Tucker exhibited 'Early June Dartmouth Harbour' at the Royal Academy in 1895. I would hazard a guess that his middle name was Edward and that his works have been conflated with Edward Tucker of Francis Street, Woolwich. See attachment.

I found the following for Charles E. Tucker, done in a very similar engraving-like style:

Well done, Tim (and Jacinto - that is clearly by him too). Yes, I agree that the 1835 was probably a misreading.

Charles Edward Tucker was born at Didsbury, south Manchester in early 1854 or late '53 (regd Chorlton 1854 Q1), the son of Francis & Caroline Tucker. His father Francis (c.1813-1887) was a Plymouth-born baptist minister (ed. either Edinburgh or Glasgow Uni) who had worked as a missionary in Calcutta before returning to found the Union Chapel, Manchester c.1840/1. He continued there until his appointment to the Camden Rd Chapel c.1858, when the family including Charles moved to London. See https://bit.ly/2Xqla0U & https://bit.ly/2Jk4bUb.

In 1871 (at 29 Hilldrop Road, Islington) Charles was a Clerk in a newspaper office, and from the same address (his parents' home) he first exhibited at the SBA in 1880 (a w/c of Hastings) & 1881 (prob an oil), by which time that year's census describes him as 'Artist - painter'. In 1891 he was living alone & unmarried at Lower St, Dartmouth, Devon ('Artist & Painter'), and also exhibited from Dartmouth the same year**. In 1894 he exhibited from south Manchester (Chorlton-on-Medlock)**. Shortly afterwards he returned to London - the RA exhibits (including our work) give us his addresses there 1895-1904, the 1899 one (10 Millbank St, Westminster) being the same as in the 1901 census. His occupation is described very precisely: 'Artist (Painter, Figure Cartoonist)' / '(1) Own Account - at Home' & '(2) Worker - at Firm's Studio'. Note that the word 'sculp' does not mean he was a sculptor - it is the very odd statistical category added later for all artists by the census office, and causes no end of confusion for historians.

The same exactness is found in his 1911 census entry: 'Figure Artist, Mural Painter Designer' & even more detail in the next three descriptive columns. This seems rather appropriate to a man who clearly liked to paint in a very precise manner. He is still in Westminster / Pimlico, on the river in Grosvenor Road. I haven't yet managed to pin down when he died, but 1914 was the last time he is known to have exhibited**.

I will upload census and other images later.

Well, after all that I'm now pretty sure this picture is not by Charles Edward Tucker (b. 1853/4) after all!

Despite his Dartmouth residence, and the RA exhibited work that apparently fits the bill, the style of painting and typical early C19th figures look most unlikely for a late 19th/early C20th artist - even if he were attempting a retrospective view. Here are two genuine works by C.E.T. - from the addresses one is circa 1900, the other perhaps a decade (or more) later: https://bit.ly/2FPqBvu & https://bit.ly/3286odS. This is a much more modern artist, with an utterly different feel, and I find it hard to believe he was painting so differently even in 1885.

But there is more. The analogous painting found by Jacinto (of Rougemont Castle, Exeter) that on the linked website is said to be by 'Charles E Tucker' is not at all. It was sold at Bonhams in 2013 (https://bit.ly/328QwaU), and there it is described as signed 'Charles W Tucker' - and it is dated 1835, the same year given to our one. It is a lot smaller than ours, and on panel; ours is also not on canvas but 'on board' - artist's millboard, I suppose, though it's pretty big. The better image at Bonhams confirms a similarly methodical and detailed brushwork to ours, and the figures are even more clearly consistent with an 1830s date.

A bit of digging has uncovered a number of early/mid-C19th Exeter-based artists & carver/gilders called Tucker; one, John Wallace Tucker (1808-1869) is well-represented on Art UK (https://bit.ly/2xpzZ4r) - he painted (often on board or panel) in a similar, probably untrained style. I think it likely they are all related, though I have yet to get to the bottom of exactly who's who; but in an 1839 Directory are listed, at the same address in Sidwell St, Exeter, Charles W Tucker (Portrait Painter) and E W Tucker (Marine, Landscape & Heraldry Painter) - the latter is presumably the Edwin Tucker, Herald Painter, listed at 256 HIgh St, Exeter in 1835; and also the Edwin Tucker, Heraldry Painter (b.c.1805), who is recorded at Townsend's Court, Sidwell St in the 1841 & 1851 censuses.

There is a lot more work to be done on this, but it seems highly likely that this is our artist.

It would be good to see an image of the label (and anything else) on the rear of the painting, and also to get confirmation of what is meant by 'on board'.

His full name was Edwin Wallace Tucker. In March 1849 he married Harriet Shallis at St Mary Steps, Exeter - his rank/profession is 'Painter', and his father is given as John Tucker, a market gardener (dead). Despite being described as a bachelor, there is an earlier marriage recorded in London (Holy Trinity, Marylebone) in Aug 1838 of a man with the same full name, to Mary Bloodworth. To be investigated. He died in Exeter on 4th May 1860 "at his residence, St Sidwell's", and was buried at St James on the 13th (abode Sidwell St, age 55 years).

Stylistically this must surely be first third of the 19th century at the latest (as Jacinto suggested with his first post). It is from the same viewpoint as the lithograph by the Dartmouth artist George Rowe (1797-1864) http://www.rareoldprints.com/p/18294.

I sincerely hope the name Tucker is not a red herring, Andrew – if so, a mass of research I've been doing in the last week is too! But I completely agree that both our painting and the Exeter view at Bonhams signed Charles W Tucker are consistent with an 1835 date.

I think that broadly we should accept that the label said to be on ours gives the right information unless there is good evidence to the contrary; the name 'Edwin Tucker' is all but unknown in the art historical context, and would therefore be an extremely odd one to choose without a reason. I mention again that an image of the label (if it's still there) would be very much appreciated – is it contemporary, and what exactly does it say? Could it relate to ownership rather than authorship...and is there anything else on the back? These are important questions without which a sound attribution will be problematic.

Edit: I am puzzled by the mention of “the collection’s Authority File associated with this painting” as one of the attachments; all I can see is a (?)third-party biography of Edward Tucker Senr (and his family), the presumed artist despite having a different name. Other than not being able to find an artist called ‘Edwin Tucker’, and a supposed family connection with Devon for Edward, is there any reason why the collection deduced it was by him?

The biography of Edward Tucker (1816–1898) is the only information that the collection has in its Authority File in the museum catalogue. A slender file is not a rarity, even in major collections.

The label in question, which was not made by the current curator, sits alongside the painting and is probably a direct copy of what (should be) on the back. It definitely states 'Edwin' and the date. The Edward information is from the collection's own investigations later, and was an attempt to find a suitable name and date range in the absence of finding an Edwin.

Thanks, Marion. Is there any chance, do we know, of a digital snap with flash of the original (if still present) and picture rear in the foreseeable? Sorry to go on about it, but the tree I'm barking up (and indeed climbing) is a very big one; I don't really want to go any further up it without being as confident as possible that it isn't the wrong one.

Please find attached a copy of Art UK's image, as well as images of the two labels, which are in fact on the back of the picture.

Thanks very much, Marion & collection.

So, not just 'Edwin Tucker' but 'Edwin W Tucker', which is very encouraging. Clearly a modern label, but presumably based on what was there before; and as I've already said, it seems reasonable to accept it - why otherwise would a name unknown to art history have been chosen?

The glimpse of the back seems to show a paper-based support, but the painting's size (26 x 40 in.) is such that I don't think it can have been millboard or similar, at least not a commercially-made one - the largest C19th size I know of was under half this, 24 x 20 in. (though I'm no expert). A wooden panel of this size seems equally unlikely. If I'm right then either the artist made up something himself (he was used to painting large images, as we shall see later); or he painted on stretched canvas, which was later cut from the stretcher and pasted on to some sort of board backing . This of course would have covered up or lost a rear inscription on canvas or stretcher. It is interesting to note that few, if any paintings by John Wallace Tucker - a close relation, as I’ll shortly explain - are signed on the front, but most, or all have full rear inscriptions. The same is true of the Exeter view at Bonhams by Charles W Tucker – more to come on him, too.

The other label doesn't really help - Pitt & Scott Ltd were a long-standing packing, removals & storage company, especially for overseas transportation, founded in around 1878 and continuing until their takeover by Pickfords in 1985. In later years they specialized in fine art packing and transport, with offices in Paris & New York as well as the UK. The label style is not very specific, but suggests to me a date between the 1930s & early 60s - 1950s if I had to guess.

Acquisition method
purchased by the Friends of Dartmouth Museum, 1963

Description
Lush trees frame a view of Warfleet Creek and Half Tide Rock, looking towards Coombe Mud (the land not yet reclaimed to form Coronation Park). The painting is a romantic vision of Mount Boone overlooking the north side of the town and of St Saviour’s Church. Blue hills rise above Dittisham and in the foreground a pool of light dignifies three working folk in Gallant’s Bower.