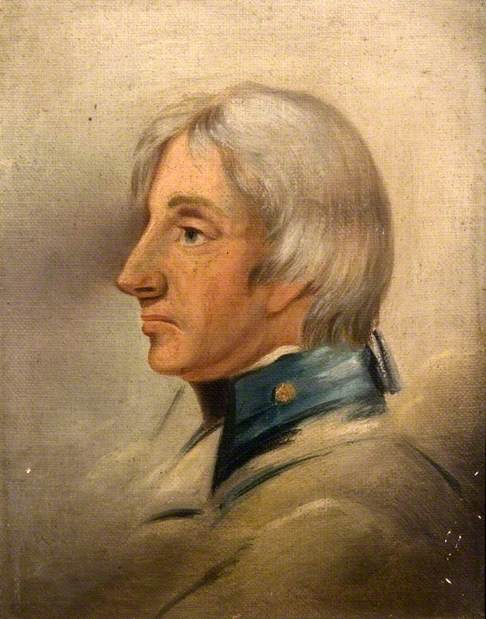 This portrait now resides at Red House Museum in Christchurch, where it was acquired by Herbert Druitt, a local history collector, who established that museum in the mid-20th C. It would be helpful to establish the full provenance of this portrait at is appears to have such a fascinating story. It was exhibited at a Trafalgar Centenary exhibition in 1905. The work was then owned then by H. D. Ellis Esq., thought to be the well-known collector Hubert Dynes Ellis (1845–1925). According to the exhibition catalogue there was an intriguing annotation on the back of the frame, allegedly written by Lady Hamilton.
'The portrait of the great, good and brave Nelson, Lady Hamilton gives to Mr Ivey, of Battersea Bridge, as Lord Nelson often used to speak to him coming from Merton to town, and Lady Hamilton knows he was a favourite of Lord N.'

This discussion is now closed. We have not been able to discover the early history of this portrait of Nelson after it was painted. However, we have discovered that the portrait under discussion here is not the one shown at the 1905 Trafalgar Centenary exhibition by H. D. Ellis as no. 3174, which was a miniature (or at least tiny). It was that miniature which, according to the catalogue, had a label on the back of its frame identifying it as a gift from Lady Hamilton to ‘Mr Ivey’.

Attached is a composite of this discussion's work with the reproduction of the copy of Simon de Koster's portrait that was exhibited at the 1905 exhibition. They do not appear to be the same portrait.

I found reference of a John Ivey, who describes himself as the clerk of the Cheque at Battersea Bridge in a court case of the Old Bailey Proceedings, 15th September 1779 between
ANN (the wife of Rowley) LASCELLES , who was was indicted for stealing a gelding of a bay colour, value 40 s. the property of Thomas Patrick , May 31st
Ivey was on duty that night and captures a horse that was loose upon the Bridge. The horse is the disputed property. A fracas takes place with two people ending up in the Thames.
This has to be the Ivey to whom Lady Hamilton gifts the painting.

As recognised in the caption, this painting appears to be one of many copies and versions of the oil portrait by the pastellist Simon de Coster in the National Maritime Museum (BHC2900).

Is there evidence that Druitt owned the Christchurch is painting? The Art UK’s information says unknown source. In any case, as Keiran points out, this is not the one exhibited in 1905, so its provenance remains unknown and perhaps not so potentially interesting.

I regret that the NMM online description of BHC2900 is informative more in terms of the quantity of versions of this image that it mentions rather than quality in distinguishing their sequence of descent from the original 'sketch' by de Koster which Nelson reputedly thought the most lifelike portrayal of him. I don't think the NMM oil is that, wherever it lies in the subsequent line. The most reliable view will probably be in Richard Walker's 'The Nelson Portraits' book (which I don't have).

Although no longer relevant in the context of our painting (which as Kieran has shown, seems not to be the copy with the Lady Hamilton inscription), I'm sure Gregory has found the right man. A John Ivey, doubtless the same, was apparently living in Battersea when his son (also John) was christened in March 1778 at St Mary's just a few hundred yards from the bridge; and he was still living in the parish early in 1810 when he died aged 70 and was buried in the churchyard.

I'm puzzled, though, by Gregory's description of events at Battersea Bridge in 1779, and think he must have mixed up two different Old Bailey cases of 15th Sep. The case where Ivey was a witness involved a highway robbery that took place at Nine Elms (a mile or two from the Bridge) on 2nd Sep: nobody called Lascelles or Patrick was involved, no horse was stolen, and no-one went into the river. There was indeed a loose horse caught by Ivey at the bridge...but that was the result of the very drunk highwayman falling off it! See https://bit.ly/2FOOypp

Kieran et al, sincere thanks for highlighting my error in misinterpreting the two portraits of Nelson by Koster. Sackcloth and ashes time for me.

Osmund - Thanks for clarifying the sloppy reportage on my part. I confused myself by writing notes on separate sheets. You'd have thought I would know not to do this at my age.

Given Kieran's evidence, would you now wish to see this discussion closed?

Pieter refers to Richard Walker's The Nelson Portrait' (16 September). Attached are pages relating to De Coster and copies of his portrait. The original drawing is discussed on p.129 and repr. on p.130. It is catalogued on p.248, to follow in my next post.

But this does not help with the discussion question which relates to provenance.

Here are the remaining pages.

I think that there may also be a copy of this painting at ‘Ancient House, Museum of Thetford Life’. It doesn’t appear to be a copy from any of the prints, as it seems to be trying to replicate a selection of specific marks and textures found on the canvas.

Thanks, Jacob, for posting the Walker pages and E. Jones for producing the Thetford copy, which - though poor - does look like one from an oil 'head version' similar to the much better Christchurch example under discussion. Both would clearly be footnoted in any future writing on de Koster as 'not in Walker' - as often the case when time shows that things have managed to elude capture in such valuable standard reference works.

The state of finish of the Christchurch copy is closest to the oval oil version at Portsmouth (Walker no. 173, p. 252 and illustrated on p.139). The latter has a Nelson family provenance and a more tenuous earlier link to a cousin of Sir William Hamilton, while NMM BHC2900 (Walker no. 163, p.250) is also firmly ex-Nelson family. Walker calls this an unfinished sketch, but it is perhaps better considered as a more finished vignette head composition deliberately set on a cloudy background. No-one has ever suggested who the ' after de Koster' artist of the NMM or Portsmouth versions might be but both, and the Christchurch one, are sufficiently close in manner to wonder if it could be the same hand 'onto a good thing'.

It seems to me that the existing back-story for the Christchurch version is pretty good already as these things often go, and very similar in extent to notes on other portraits (de Koster-type and others) that Walker does include. I don't think more is likely to be found by prolonging discussion on that aspect here, so unless anyone has any thoughts on who the oil copyist(s) might be, and if Jacob agrees, I suggest we close the matter.

Thanks to Jacob for the Walker pages, they're very informative. I wonder if the Christchurch version is actually derived from de Koster's initial 1800 engraving:

rather than from any more worked-up version. Like that and the initial sketch it shows less of the uniform (no epaulettes) and the collar button is further forward.

This suggests it might have been made fairly early after the sketch and engraving as later versions seem to have been keen to emphasise rank and decorations. Alternatively it could be a rather later copy taken straight from the engraving, though I don't know how widely that was circulated.

Print versions were widely circulated, and over a long period, as just the online NMM selection (which may not be all held) shows:

I agree with Pieter (30 October) that this discussion should now be closed. It has attracted 14 comments in the last two months. As to the question posed, "What is the early history of this portrait of Nelson after it was painted?, we do not know the answer. Pieter sets out our current understanding in his post. The designation on Art UK is appropriate.

Just to clarify by briefly revisiting the 'back story' I alluded to on 30/10/20 11:32, without looking back in detail. It is clear from Kieran's first response on 16/09/2020 and the attachments he included that the Christchurch oil in question here is not the image that belonged to 'Mr Ivey' as gift of Lady Hamilton or was lent to the Trafalgar centenary show (held at the Theatre Royal, Drury Lane if I recall correctly) by H.D. Ellis as item 1074. That was clearly at least 'miniature' size - and to all appearances from Kieran's third attachment probably a copy of the original de Koster print. If the oil is also known by Christchurch to have belonged to Ellis -which they have so far neither confirmed nor denied- it was as a separate item. Since they say they don't know how they obtained it I still think the matter can close unless they have anything else to add.

As you will have seen with this discussion Group Leader Jacob Simon has made his recommendation to now close this discussion as we have concluded that we do not know the answer to the question as to the early history of this portrait of Nelson after it was painted. It would be good of you if you could acknowledge this before we close this discussion. Thank you.