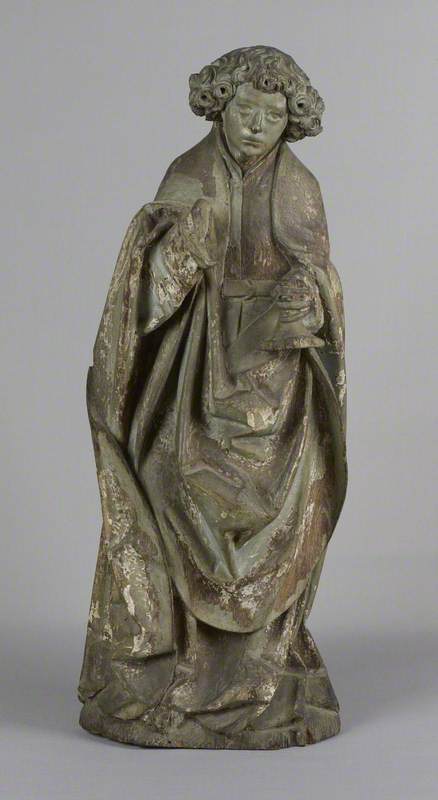 Jacinto Regalado recently identified this figure as Saint John the Evangelist. It is related to two others at Hospitalfield, ‘Saint George’ and ‘Saint Barbara’.
https://bit.ly/2O7E5q0
https://bit.ly/3iGtEYK

He sent links to two other carved versions of Saint John the Evangelist with the chalice, which are described as ‘Upper Rhine’ and ‘Southern German (probably Nuremberg)’ respectively, both dated c.1500.
https://bit.ly/3iHa3aY
https://bit.ly/3eagTlI

‘The carving is displayed alongside the carvings of St Barbara and St George in the same room at Hospitalfield. They were acquired by the last private owner Patrick Allan-Fraser who bequeathed the house and contents in 1890 as one of Scotland's early art schools. As such, these items would have been purchased as didactic examples of antiquity as distinct from devotional purposes.

We would be keen to learn more about the origin of these three sculptures as they are such compelling objects and they wear their history so vividly, although we know very little about the chapel from which they originally came, any further suggestions would be very welcome. Thank you again.’

Could this possibly be attributed to a follower of Tilman Riemenschneider? The defined curly hair and style of drapery is characteristic of his work.

I would suggest considering sculptures carved in the Cologne area towards the end of the 15th century.
As the three figures are carved of oak - remarkably, retaining their pigmentation - the Kalkar region is likely.
On could cite Master Tilman's workshop (Tilman Heysacker who hailed from Utrecht).

I expect this is late medieval. To my eye, St John's face already points to the Renaissance. The St George has similar hair, and the handling of drapery seems similar in the St Barbara . They are probably all from the same workshop and the same church.

They are also relatively small, a little under two feet high, and all previously attached to a flat backing. I suspect they were part of a retable like the one below, which is dated 1466:

I realise the answer is probably negative, but does the collection have any idea as to provenance beyond the donor's identity, such as where or from whom he obtained these pieces?

An expert on armour should be consulted about the St George for help with dating. These works could be later than the date of the armour, but they would not be earlier.

Here is a St John Evangelist, c. 1490, by Tilman Riemenschneider:

Not that I am an expert- but St Georges armour is like the plate armour of the young henry VIII.So about 1510 ish
https://en.wikipedia.org/wiki/Greenwich_armour#/media/File:Henry_VIII's_expensive_armour.jpg

A somewhat smaller and probably older wood figure of the Madonna and Child in the same collection is here:

Not at all an expert, but I used to live in Würzburg where Riemenschneider had his workshop, so I picked up a few pieces of information. One is that Riemenschneider was famous for carving almost exclusively in Linden or Limewood. So, an oak carving would be unlikely to be his. Also, the face is rather round for a Riemenschneider; his figures typically had long oval faces. But his workshop was very large, with 30-40 apprentices working at any one time and two of his sons also became sculptors, so there are lots of possiblities.

I would agree that the peculiar softness of our St John's face does not seem to match the faces of either Riemenschneider or Heysacker.

Comparing with contemporary portraits, the St John looks like it comes from 1470-85. Before that men's hair is cut closer and often covered, while afterwards it becomes even longer (as you can see in some of the examples quoted above).

Even without the stylistic differences and these pieces' chubbier, less-expressive faces that probably puts Riemenschneider out of the picture as his career doesn't really start till the mid-1480s.

Heysacker might be possible as he's a bit earlier and works a lot in oak as already pointed out. He seems stylistically variable, so it's possible that it could be his even though there are differences to the Budapest St John that Jacinto linked to:

which is also oak and could be a slightly later handling of the same subject (note the longer hair). But it's more probably a less well-known sculptor, given the different way the hair is handled.

I may be unduly biased, but the face strikes me as too soft to be German, and more likely to be Flemish, possibly Italian or French. Compare to this St John from the Ghent Altarpiece:

As for dating, it is probably 15th century-early 16th.

However, an expert in late medieval-early Renaissance sculpture should look at this. It is a lovely work.

Arndt of Kalkar is a possibility. He (like most of the Lower Rhein and northern German sculptors) worked in oak, Baltic oak to be precise (he was apparently very fussy about where his oak came from.) The dates would be about right, he is known to have worked from 1460 to 1491 when he died.

The Schnütgen Museum in Cologne just opened a major exhibition dedicated to him. http://bit.ly/ArndtvonKalkarExhibition Article in a German newspaper (sorry) but one close up picture of one of his works. The two curators and experts on the artist are Friedrich Gorissen in Kleve, and the Dutch Guido de Werd who published a book about him.

Perhaps if it would be possible to get some better images of the three sculptures, we could approach them for an opinion.

I agree, Jacinto, it is quite lovely and deserves a bit of effort!

I've requested the high-res images for all three sculptures. Unfortunately, although I have remote access to the painting images, that's not the case yet for most of the sculpture.

Thanks, Marion. Guido de Werd now lives in Cologne, mostly retired, and should be easy to approach through the museum. I will do that once we get the images.

Arnt of Kalkar was not German but Netherlandish. Even if these works are not by him, no doubt it will help to have an expert in the field look at suitable images, because he could always point us in the right direction. Under normal circumstances, someone from the V&A, for instance, could go up to see the works in person, and maybe that can happen at some point.

Er- if I saw this style of figure depicted in a medieval manuscript I would have thought it to be early Fourteenth century-- is that a possibility for this figure???

I expect, Louis, that it is best to wait for expert opinion, which I hope will be soon forthcoming.

Maria, the General Manager at Hospitalfield would be delighted to share a set of high-resolution images with Friedrich Gorissen and Guido de Werd. I have those from our Images team now, so I'll email you a link to download them.

I'll crop some good details for the discussion as well.

I've attached some images. These are sharper when enlarged than those taken from the website.

I have sent an e-mail to the Schnütgen museum in Cologne to pass on to Guido de Werd. Fingers crossed!

Maria's suggestion strikes me as the best yet. The website for the exhibition of Master Arnt Beeldesnider and his work at the Schnuetgen Museum in Cologne:

has several magnifiable photos of piece and some short films, including showing restoration. There's also an exhibition app for the exhibited works:

with all the information, though the images on the app are only thumbnails, so you can identify what you're looking at in the exhibition.

But if you look at the first picture on the website, the hair of the rightmost Magi is very similar to the way St John's has been carved. Generally the figures seem more sorrowful than anguished, unlike other sculpture of the period, which matches the Hospitalfield pieces.

Jacinto is probably right about Arnt coming from what is now the Netherlands, though his (German) Wiki:

suggests no one has been able to discover much apart from a rough start date to his career and a death. But the dates do match my suspected ones for these figures and one of the towns he associated with, Zwolle, is well in the modern country while the other, Kalkar, is in Kleve (Cleves) on the German side of the current border. But it might be more suitable to describe both as being on the Lower Rhine plain.

One thing I do wonder about is the female Hospitalfield figure. I presume she's been identified as St Barbara because the object in her right hand is taken to be a model of the tower in which she was imprisoned. But it doesn't look much like a tower and St Barbara is rarely depicted with a book. I wonder if it could be a Magdalene who is often shown with a book and ointment container. The long hair and red garment might support that. Alternatively it could be a more obscure local saint or even a royal donor - there might be remnants of a crown on her head.

It will depend what the experts think and we're lucky that there have been some putting Arnt's corpus together in recent years. Even if these aren't judged to be by him, they seem likely to be from the same time and area.

I take it Maria Castro has not heard back from the Schnütgen museum in Cologne and/or Guido de Werd?

No, and I've tried three different e-mail addresses so far. I have one more possible avenue to pursue, so thanks for nudging me, Jacinto.