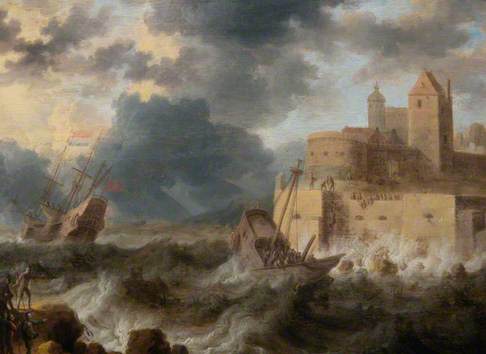 Can anyone tell us more about the context for this scene?

This discussion is now closed. The Collection’s own opening statement and Pieter van der Merwe’s comments have provided more context for this scene and a summary has been added to the artwork description field.

The Collection commented: 'The latest opinion I know of is that this image is more of an imagined Romanticism; a metaphor for the dangers of life's journey. Bonaventura Peeters the first was a Flemish marine painter who was one of the only practitioners of seascapes. He was renowned for storms, shipwrecks and imaginary Mediterranean port scenes. So this scene might have reference to a particular moment, but more likely is a creation from the artist's imagination.
However, the boat sailing away has been identified as a Dutch man-of-war. I believe the red white and blue flag is that of the Dutch Republic (formed in 1581 when several Dutch provinces seceding from Spanish rule). And suggests this could be a scene from the Eighty Years war (that ended in 1648 - just in the time-frame when we believe this painting was completed). Forts like this were erected on the island of Curacao, which had been taken from the Spanish by a Dutch expedition in 1634. The fort here looks very like those erected at speed by the Dutch to defend this island.
The other red flag on the boat sailing away could be the Dutch resistance flag that was an arm with a sword on a red background.
Even if it is an imaginary scene, it is likely a fancy based on real events or put together with from observations made by the artist. Interestingly, it sort of fits that an artist might promote the idea that he paints 'imaginary' scenes if he felt the need to disguise the political messages he is placing in his works (i.e. support for the Dutch republic).'

This looks like the original Fort Beekenburg, Willemstad, Curacao before partial rebuilding and then falling into disrepair.

The collection opinion is broadly on the mark: this is not a specifically topographical painting, even if the castle could be tied to a source image - which I rather doubt would be Curacao for practical reason. It's more likely an imaginary construct, as the 'inventor' of marine painting as a genre, H. C Vroom's, tend to be: as for example here (supposedly a view in the East Indies) done in 1614 -the year Peeters was born

The composition, however, can be found elsewhere in Peeters: i.e the castle built on solid land as a place of safety; one ship in dire straits but another clawing off the land, and figures observing in the foreground - all as metaphor for the hazards of the stormy seas of life and either more or less explicitly the necessity of faith for salvation. This one is a better known example:

It would nonetheless be interesting to see a better detail of the ship to the left to see if it is flying what's usually called the Ostend fighting ensign of an arm holding a usually curved sword.

The Edinburgh and East Scotland Curator, Antonia Laurence-Allen has supplied an image (attached) and commented 'Here is the detail – it looks like a crescent moon or a curved sword on the red flag?'

Thanks: it is 'crescent-moon' rather than sword (and not the Ostend ensign), with a similar smaller shape to the left but there is no obvious attempt to show either as white, as in the Dutch tricolour at the fore. Both shapes may be no more than the painter showing wind-effects rippling a plain red flag in which ageing of the paint has made things a little deceptive. If so, use of just a red flag in the ensign position is also a puzzle, at least without resort to reference sources: ensigns in Dutch ships at this point normally give clues as to which province or town they are associated with and crescent moons (unless lying on their backs more like a horse-shoe, as occur in some Dutch coats of arms) also usually signal Islamic powers - mainly the 'Barbary' states of North Africa - which is not the case here. Red is often used as a 'danger' colour but if its any sort of 'official signal' use, I doubt that would now be discoverable -or be worth chasing given the general dangers of the scene are self-evident.

We can leave this open for a while in case anyone has other thoughts.

That's a warship of Amsterdam (from its arms on the stern) with what became known as the Ostend fighting flag/ensign of an arm with a curved sword, sometimes seen emerging from a cloud which may be what the dark area at the hoist (left) is-though none of the shapes are very clear. It appears under that name on at least one 1680s flag sheet but (as here) there are earlier examples so appears to have had earlier use not necessarily connected with Ostend.

The question about this painting was a very general one about its likely context. The collection (NT) gave an interesting and relevant reply, to which a little has been added by subsequent comments including related examples of work by Peeters. While I don't dismiss Dutch colonial forts on Curacao, or anywhere else, as being part of either Peeters's or other painters' visual memory (at the least from perhaps seeing contemporary images of them, many probably now lost) both the initial NT comment and mine point out that the aims of this sort of work -other than simply decorative -tend to be religiously or politically symbolic rather than those of specific topographical record.

That being so, the painting's current title is appropriate and though (perhaps for condition reasons) it's not a particularly strong example by Peeters, I don't see a reason to question the attribution. Flags, I'm afraid, often elude specific interpretation as does the (probably just plain) red one used as an ensign here. I'm not convinced the appearance of one or two crescent moons is more than an illusion of the painting, or condition, even from the enlarged photo kindly supplied, and be it one (or especially if two, since they tend to be single or in threes) doubt such a pattern could be found that would fit a Dutch ship, as the tricolour clearly shows it is. I therefore suggest we close the discussion.

Pieter, I have asked the Collection if they are happy with the discussion closing, and suggesting a short summary of the findings helping so that we add a line or two to the artwork description field at least in terms of context. David

The Collection have commented: 'Yes please do summarise, that would be really helpful. We see the conversation and are happy with the description sent originally, with some of the comments from Pieter, which do indeed add more detailed context.'

Title
A Vessel Wrecked beneath a Fort in a Storm

Description
The scene Peeters painted here was an imaginary one, neither topographical nor based on an actual event. The flags, with Dutch connections, elude interpretation and no particular significance should be attached to those included. The artist was renowned for storms, shipwrecks and imaginary Mediterranean port scenes. Like others he painted, it was a metaphor for the hazards of the stormy seas of life, including a castle built on solid land and a ship in dire straits.