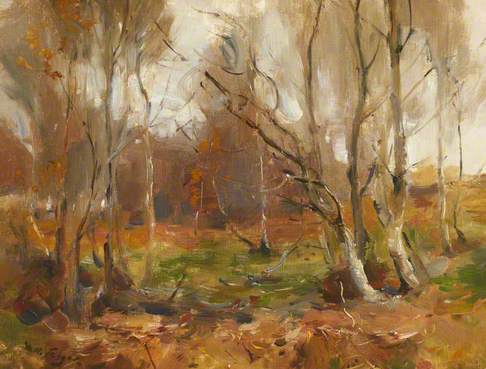 It has recently been discovered that this painting is by William Miller Frazer, having been previously listed as by an unknown artist. The painting was given the working title 'Autumn Landscape*' by Art UK when it was catalogued, as we were not aware of its original title. Can the original painting title now be found?

This discussion is now closed. No conclusion was reached on the painting title.

If anyone has any further information about this work, please propose a new discussion from the artwork's page on Art UK.

Is anything known of this painting's provenance prior to 2001, which might help researchers to find its original title?

Frazer was a highly-prolific landscape artist: Invaluable lists over 400 works sold (though some are posters), and the MutualArt website illustrates over 200 paintings. Up till 1940 (and he lived another 21 years after that) he exhibited 335 works at the venues covered by Johnson & Greutzner in their 'British Artists 1880-1940, over 90% of them at just two places: the Glasgow Institute of Fine Arts (125 works) & the Royal Scottish Academy (182).

108 of his RSA exhibited works are listed (with dates, but not sizes) in 'The Royal Scottish Academy 1826-1916'. Of just those at least two dozen are possibles, of which I'd say ten are very possible, with titles like 'The month of October', 'The Last of the Leaves', 'November Woodland', 'Late October - East Lothian', 'The last of October', 'Late Autumn - Lindores' and 'The Birchwoods of Tentsmuir'. So even if we knew this was an exhibited work (which we don't), we would need a date even to have a stab at it.

Without one, and if no associated information is forthcoming, there is really no chance at all this will be solvable. An obvious question, but the Collection has already checked the back for a label or inscription, I presume?

There are a number of images from this painter available from searches.

(you can use single brackets to activate HTML; or copy and paste into address bar )


Should ashamed of themselves selling off Scotland's heritage! JRGD.

The signature on this painting is similar to those on Frazer's later works and my feeling is that it is post 1940 and probably not an exhibited work. Osmund is spot on in commenting that in the absence of an inscription or label, or provenance from a previous owner, it will be difficult indeed to suggest anything other than a generic title for this picture. Inspection of the back of the board may help further in dating the work.

Did he always sign with Frazer at the end? I live in Norfolk and have two Scotish landscapes by a William Miller. lovely pictures which i have always thought had a strong lord of the rings look to them.

Other contributors and group leaders have rightly pointed out that it is very unlikely in the absence of labels on the back, etc., that we will find out the original title of this painting. I suggets that this be our formal recommendation to the collection.

Other contributors and group leaders have rightly pointed out that it is very unlikely in the absence of labels on the back, etc., that we will find out the original title of this painting. I suggets that this be our formal recommendation to the collection.

We have contacted the collection and will pass on any feedback.

Acquisition method
donated as part of the Neil Livingston Collection, 2001