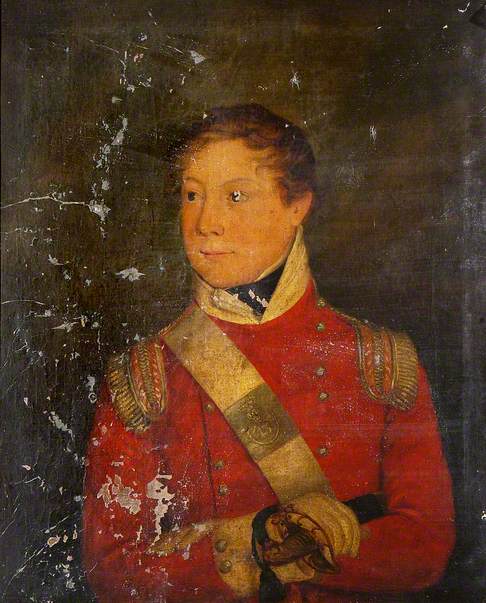 This is an officer of the 43rd Foot of the Light Division (the badge on his cross-belt). This regiment arrived in Belgium too late to take part in the Battle of Waterloo although a number of officers from the 43rd served on Wellington's staff. Some members of his staff were killed during the battle and this officer may well have been one of those. This COULD be Lt. W Havelock, 43rd Ft (ADC to Chas. Baron Alten of the King's German Legion) who was wounded at Waterloo but later killed at the Battle of Bamnuggar in the Sikh War of 1848 leading the 14th Lt. Dragoons in a charge that he commanded until cut down by cannon fire. I cannot find any reference to an officer of the 43rd having been killed at Waterloo in the Waterloo Roll Call.

This discussion is now closed. The title has been amended from ‘Officer Killed at the Battle of Waterloo’ to ‘An Officer of the 43rd (Monmouthshire) Regiment of Foot’.

This officer of the 43rd Foot wears the jacket authorised in 1811 for British infantry officers. With no other evidence about the sitter, I think the title, which might have been added a long time afterward, might well be spurious. The officer probably gave very creditable service at battles in Spain which the label-writer hadn't heard of.
Dalton's 'Waterloo Roll Call' (1904) lists all officers at Waterloo, with a short account of their services, and gives their regiments. It can be read online (free) As you say, Lt W Havelock, 43rd,ADC is listed there (wounded). Simply scroll through the the Roll Call to look for some other officer of the 43rd; if no other is listed, the label seems just wrong.
It is possible that the officer was killed in the Peninsular War, and later whoever wrote the label wrongly guessed that his death must have been at the most famous battle of them all, Waterloo.

The 43rd Foot sailed across the Atlantic in 1814 at the end of the Peninsular War to fight the Americans. If there was any story that the officer in the portrait was killed in action in 1815, it would have been at the Battle of New Orleans, 8th January 1815. It is possible that the label-writer assumed it must have been at Waterloo (18 June 1815). Lieutenants Duncan Campbell and Meyrick of the 43rd were killed at the Battle of New Orleans. Might one of them be the young man in the portrait?

My First impression when I saw the painting was, hmm, looks like it was Painted in America. Then I read David's 2nd post and sure enough Our fellow might have been in New Orleans. A good deal of my Family fought the British in N.O. though I don't know which regiments they faced. Maybe we can get a peak at the back of the Painting. I'm fairly certain it has never been relined.

The Montague Doughty's were a military family ( Charles VC WW1) living at Theberton ,Suffolk ( Where the Zeppelin crashed in WW1 ) . Wonder if it is a relative. Looks like a very young man- so Cornet Ensign or Sub LT ??????? Any record of a Montague or Doughty in the 43thrd???

Are we sure this is the 43 thrd?? Having looked closely and compared badges, could it be the 13th regiment of foot- is an enlargement of the strap buckle possible???

Having found a drawing of William Havelock-I don't think it is him.
https://www.britishempire.co.uk/forces/armyunits/britishcavalry/14thltdragoonswilliamhavelock.htm
Here is a picture from 1849 of another very young ensign of the 43thrd.
https://en.wikipedia.org/wiki/Sir_Henry_Wilmot,_5th_Baronet#/media/File:Henry_Wilmot_1849.JPG
Our sitter is probably from the time of Waterloo, and probably from a noteable family- there must be a list of Ensign's from this period somewhere-hopefully :-) .

Could it have been painted in India in the 1840's? The style could be Indian rather than American.

What little I could find seems to show the horizontal frogging type jacket closures for lower ranks in 1815, only the officers at that time had the nifty little double buttons down each side.
This chap from the late 1840's has a similar jacket with fancier epaulettes and collar, but he's a Lieutenant General, so... https://en.wikipedia.org/wiki/43rd_{LPARENTHESES} Monmouthshire)_Regiment_of_Foot#/media/File:Hercules_Robert_Pakenham.png

Do we think that further progress is possible on this discussion, "What more can be established about this officer at the Battle of Waterloo?" ? If not, the time has probably come to recommend closure.

On reflection, before we close this discussion, I think we should follow up Whaley Turco’s suggestion of 23/01/2021, namely “Maybe we can get a peak at the back of the painting. I'm fairly certain it has never been relined.”

Might it be possible to get a photograph of the reverse, please?

Jacob, that has been requested from the Collection. David

Jacob, the Curator is returning to the stores this Friday and will take a photograph of the back of the painting then. David

Jacob, apologies for the delay, on my behalf, none from the Collection, in providing us with images. Apparently in a really awkward spot in the stores, requiring lots of things to be moved.

Clarification: The Collection was very timely in providing the photographs; I was not in posting them up here.

The inscriptions on the reverse of the painting, for which many thanks to the collection and to David, suggest that the painting came from the Montagu Doughty sale in 1950.

The most famous member of the family was the explorer, travel writer and poet, Charles Montagu Doughty (1843-1926), of Theberton Hall, Suffolk. He married in 1886 to Caroline Amelia McMurdo (c.1863-1950). She died in 1950, the year of the sale, so it may have been her death which triggered the sale. Perhaps the collection has a copy of the sale catalogue?

Wikipedia in its entry on Theberton give some information on those resident at the hall, in particular William Light (1786-1839), who is sometimes described as the founding father of Adelaide, South Australia. He served in the army during the Napoleonic wars but it is clear from his documented portraits that our portrait does not depict him. Wikipedia refers to George and Anne Doughty, who lived at Theberton Hall. George Doughty (d.1798) was Sheriff of Suffolk. His wife, Anne Goodwin died in 1829. Their son was Rev. George Clarke Doughty (1768-1832). He and his wife, Catherine, had three sons, George Thomas (1797-1802), Charles Montague (1798-1850) and Frederick Goodwin (1800-78), see

Even the eldest son, George Thomas, seems too young to have fought in the Napoleonic wars. I also consulted Henry Montagu Doughty, “Chronicles of Theberton: A Suffolk Village”, 1910, but this is unhelpful.

So my attempt to establish the identity of the portrait through a study of the family seems to have come to a halt.

I wonder if the Waterloo link is a later misattribution. Among the six paintings that were "purchased from Doughtymontagu" by the collection in 1950 (https://bit.ly/3hkPnXl) as well as this one there is a picture called Battle for the Standard, which is attributed to "British (English) School" but is actually a reduced copy of Richard Ansdell's picture at Edinburgh Castle(https://bit.ly/3AERYmA) on ArtUK under Historic Environment Scotland:

This shows an incident of the Battle of Waterloo and it may simply be that the portrait was assumed to be related to it by proximity.

The other four pictures are two pairs of portraits from c 1650 and c 1720 that presumably came via Anne Goodwin. There might be a link to that portrait from that but both Montagu Doughty's daughters were still alive in 1950 , so it may be that the pictures that were sold then may only have been linked by fact that neither woman wanted them, due to condition etc.

So not much help, but the specificity of it being an officer in the 43rd Foot might mean that a more remote family link might produce a likely candidate.

This is a helpful post, Mark. Without getting too involved with the other pictures in the same collection, it is worth noting:

Battle for the Standard, given as circa 1815, is actually 1848 or later and should be described as after Richard Ansdell, thanks to Mark

I will include reference to these when I move to close this discussion.

But for the moment is there any way we can identify which officer in the 43rd Foot is represented in the portrait under discussion?

The Battle of the Standard painting at Colchester is the subject of a separate query, not yet a public discussion, to correct details. We are waiting for the collection to respond.

I notice on the back in chalk it says Officer Waterloo. Where does the Killed bit come from-if that is known?.
Just to add to 43rd names at Waterloo. Capt James Shaw-but in command of 3rd squadron.
Charles Gore -who was promoted to Captain a few days before Waterloo and transferred to 85th foot.He had been in the 43rd since 1811.Later became a General.
As an old man he has a similar pudgy face as our sitter.See photo.
https://en.wikipedia.org/wiki/Charles_Stephen_Gore
There were four Montagu(e) s at Waterloo-John Ens 52nd-Willoughby Lt R Artillery- John Ens Coldstreram Wounded-Henry-Ens 3rd Foot,became General.None of these linked to 43rd that I can find.

Unless further information is forthcoming from the collection or elsewhere, I propose to recommend closing the discussion later this month. I would be minded to recommend that the title is changed to "An officer of the 43rd Foot" and probably to leave its date as circa 1815. Also perhaps, subject to the collection, change the acquisition method from "purchased from Doughtymontagu" to "purchased from the Montagu Doughty family" or similar.

Jacob, I have asked the Collection about the Montagu Doughty sale catalogue. David

Jacob, the Collection doubts very much if they have a sale catalogue. The acquisition method has already been changed to eliminate the mistake on this and five other Ipswich works on Art UK, the website should reflect these changes shortly. David

This discussion about a picture in the Ipswich collection, “What more can be established about this officer at the Battle of Waterloo?” has made some progress and appears to have been taken as far as possible. On this basis I recommend that the discussion should be closed, subject to any further input by the collection or by my fellow group leader, on the following basis.

The title could be changed to "An officer of the 43rd Foot" as evidenced by several contributions to the discussion. There is no evidence that he fought at Waterloo.

The recommendation to change the acquisition method from "purchased from Doughtymontagu" to "purchased from the Montagu Doughty family" or similar has already been accepted by the collection.

Although not part of the present discussion, I have suggested (6 July) that other works in the collection with a Montagu Doughty provenance could be reviewed by the collection (see my post, 6 July), most obviously the Battle for the Standard, given as circa 1815, actually 1848 or later and should be described as after Richard Ansdell (thanks to Mark, 7 July).

I agree with Jacob that the most we can say about this portrait with certainty is that it depicts an officer of 43rd Regiment during the late Napoleonic Wars - say, c1811-1815. For the record, the regiment was correctly titled at this period 43rd (Monmouthshire) Regiment of Foot (Light Infantry), hence the device of the light infantry bugle on the shoulder belt plate. I believe that the facing colour was white.
While the various suggestions made in the discussion are all interesting speculations, without more evidence it is not going to be possible to identify the sitter. Therefore I think the discussion could be closed at this point.

Title
An Officer of the 43rd (Monmouthshire) Regiment of Foot