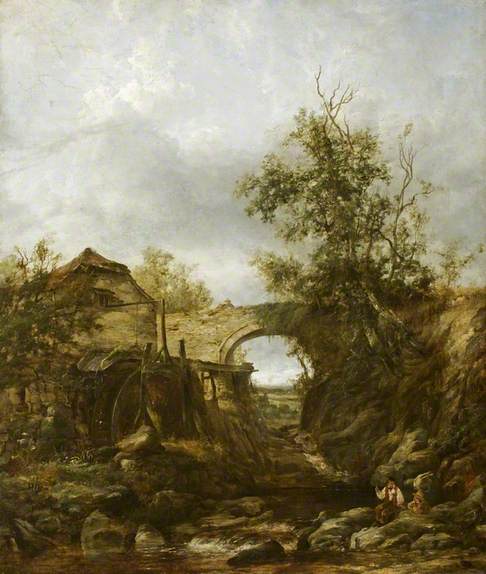 Alistair Brown of Art UK has added: ‘There does appear to be an inscription - a signature? - lower right, beginning A T or J?’ and Marion Richards, Art Detective Manager has added: ‘or is there a (?) CH on the sloping rock face above it?’

This is not really my area at all and Andrew Greg is very much better placed to give an opinion. But my initial thought is Thomas Creswick or School of Creswick. That doesn't fit with the comment above about the possible artist initials.

Please take a look at this work by the British artist Edmund Gustavus Müller (c.1817–1888) on Art UK. It has many similar features, including the greenery hanging over the right side of the bridge.

InEdmund Gustavus Müller's painting of "The Old Mill", the male figure sitting on the river bank is preparing two eel traps or pots. The artist's better-known older brother, William James Müller (1812 - 1845), produced a painting entitled "Eel Traps at Goring" (7' x 4'2"), which, by the 1890s, was considered to be his best work.

William James Müller also painted a mill wheel similar to the scene in this painting:

In 1857, at the exhibition of the Bath Society for the Promotion of the Fine Arts, E. G. Müller also exhibited a work entitled "Eel Traps".

Even if it is the same location, I do not think it is the same artist. Ours looks earlier and better. Müller looks like fairly routine Victorian work.

Could a hi-res of the area with the possible inscription/signature be posted, please?

Three details attached and additional variant to help with the inscription.

Could this be by John Crome?

Are we sure that is really a signature at lower right?

I don't think that is either an inscription or signature lower right. Just artist's marks. Muller is a good contender, if the figures, which are not that well painted, are anything to go by. he varies in quality.

I agree: unless that particular mill can be shown to have been a subject for many artists, the existence of the McLean Museum variant has to be considered supportive.

Whether the mill existed at all is at least questionable and it is sufficiently curious to have attracted wider attention if it did.
The bridge clearly carries a lane over the stream below but that does not power the mill, which has an overshot wheel fed from a watersource at a higher level behind the bridge. That looks sufficiently unlikely in real terms to suggest the setting is largely imagined.

The paint handling in this picture is significantly more vigorous and animated than that in Edmund Müller's "Old Mill." It is closer to that of his brother William, though I am not saying it is by him.

I am sure Sheena (Stoddard) would be able to guide us on the W.J. Müller suggestion. She was co-curator of the important Müller exhibition at Bristol in the 1990s.

Could the watermill be on the island of Sodor?

All of these watermill scenes could, of course, be simple artistic fantasies.

Thanks, Richard. Sheena Stoddard will also send it to Francis Greenacre, who was the other curator of the Müller exhibition.

Thank you Richard, our William James Müller exhibition and catalogue were 30 years ago (ouch) in 1991. I’ve shown this discussion to Francis (Greenacre) and, although WJM was an uneven artist, we agree this is not by him. It is very stiff and lacks the vitality of most his work – which you can compare in the Mutual Art link given by Kieran on 24/7. Also his earliest work was topographical and throughout his life he drew buildings accurately. The detail of the wheel here does not seem well drawn. As Pieter pointed out, an overshot mill is not credible and the composition is surely invented.
Yet the figures do look a little ‘Müllerish’. Soon after W J Müller’s untimely death in 1845 forgeries of his work were on the market and it was also rumoured that his younger brother, Edmund Gustavus, had finished works which were in WJM’s studio at his death. However, I would expect this painting to have a forged signature if it was in one of these categories.
Francis and I had never seen the E G Müller painting at the McLean before, which is more proficient than the paintings we are used to looking at by him. There is clearly some relationship between the works but I’m afraid the discussion will need to continue on that one. I hope this helps.

Title
Landscape with a Bridge, a Water Mill and Boys Fishing