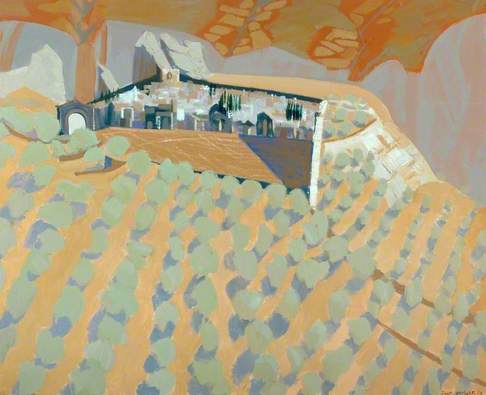 Does anyone have any information on this painter please? I am interested to know more and see more of his work.

This discussion is now closed. Jack Wright’s vital dates have been established as 1919–1994 and Grant Waters’ new artist biography will now be reviewed with the Editorial team and then incorporated on to the Art UK site. The vital dates will be reflected on the website for both the Bradford Museums and Galleries and Hampshire County Council Wright paintings on the Art UK website as soon as the Copyright team review and approve the artist authority record update.

The Collection has commented: ‘Our records show we purchased this work in 1974 from the artist who at that time lived in Buxton Derbyshire. We had an exhibition of his work at Manor House Museum, Ilkley in 1974 title Jack Wright Paintings and Drawings. Unfortunately, we have no additional biographical information about the artist.'

The other painting attributed to Jack Wright on Art UK https://bit.ly/3tdSowU in Hampshire County Council’s Fine Art Collection has been the subject of a separate Art Detective submission with information supplied by Art Detective contributor Martin Hopkinson working with Art UK volunteer Alistair Brown, with helpful supplementary information supplied by Bournemouth Arts Club. A Jack Wright, with connections to Christchurch, was on the committee of the Bournemouth Arts Club from 1959 to 1963, and submitted Spanish landscape paintings to the 1958 and 1959 exhibitions. Alistair wonders, because of the different addresses, if there are two different painters called Jack Wright working at this time.

The Jack Wright who lived in Christchurch in the 1950s exhibited at the Royal Academy in 1954 ('Goat', a sculpture in English walnut), 1955 ('Wagtails, Derbyshire', painting in tempera), and 1957 (a painting 'Evening Landscape, Riaza'). Riaza is in Spain, not too far north of Madrid. My feeling is that Jack may well not be his given name, as it is used frequently by males named John, James, Jonathan etc). So a search of Ancestry for example may need to be broad to yield results. I think it likely that the 1958 painting held by Hampshire County Council is also a view in Spain. Jack Wright doesn't look up much but I think it probable that the Christchurch JW is also the same JW who lived later in Buxton, Derbyshire. My reasons are two fold: (1) The JW who showed at the RA in the mid 1950s exhibited a work 'Wagtails, Derbyshire', demonstrating a connection to that county, and (2) there is quite a strong similarity between the painting of Spain and that of Sicily from 1973. Not definitive evidence of course but a reasonable assumption on which to base further research.

There's a John Wright listed on Art UK with a visible signature on this work: https://artuk.org/discover/artworks/cleared-site-119887

Are they similar enough to be the same person?

Andrew, thank you for taking the time to look into this. The John Wright who painted 'Cleared Site' was a member of 56 Group in Wales and, as far as I am aware, he never styled himself 'Jack Wright'. I don't believe that John Wright is connected to either of the paintings which feature in this discussion but thank you anyway for raising the point.

A page on the artist John Elwyn [1] lists a 1949 exhibition as: "Paul Alexander Gallery, Notting Hill, London (with Jack Wright)"

Andy, thank you for those contributions. We can now with confidence tie in the Jack Wright referred to in Robert Meyrick's book on John Elwyn to the Jack Wright who is listed as exhibiting at the Royal Academy in the mid 1950s from an address in Christchurch, Hampshire. You also found that Jack Wright was a teacher at the Southern College of Art in Bournemouth in the late 1940s (page 43 of Robert's book on John Elwyn in the first edition, 2000) and that he was born in the Sheffield area. We also now know that Jack Wright was one of the artists offered camouflage work in April 1940, which he and his other artist friends, including John Elwyn, declined. JW worked on the land instead. This small group of artist friends were born within a date range of 1916 to 1920 so it would be reasonable to assume that Jack Wright may well have been born within that timeline. It will now be easier to search for his biographical details. I'll also check to see whether I have any reviews of the 1949 exhibition at the Paul Alexander Gallery. Thanks again Andy, that is most helpful, and with thanks too especially to Robert Meyrick for his hugely valuable original research.

I have been in correspondence with Robert Meyrick, who regrets that he knows no more about Wright than is in the above work.

However, he has kindly supplied a copy of the price list/ catalogue for the 1949 exhibition.

I have uploaded this to Wikimedia Commons [1][2], and transcribed it there. Of the 42 works listed, 17 are by Wright.

[2] Please disregard the red "Template:Ditto" remarks, in place of ditto marks, This technical issue should be resolved shortly.

Andy, many thanks for the further information and to Robert for supplying the details from the catalogue. The paintings by Jack Wright which have an identifiable location are all in or near to Bournemouth apart from the one of Bakewell, which confirms the artist's perceived link to Derbyshire. The artist also names two female models, Elizabeth and Nadine. It is possible that one or other may be related to him, which may help further online searches. I have failed so far to locate a 'Jack Wright' born in Sheffield who meets the likely profile. In fact Jack appears to be a more popular first name in Derbyshire than seems to be the case in Sheffield. This makes me wonder whether, in the 1940s, when he said he was from Sheffield it is possible he meant 'near Sheffield'? I'll look again at north Derbyshire as a possible birthplace as both Buxton and Bakewell feature in his work.

I am attaching a record for a Jack Wright of Sheffield in the 1939 England and Wales Register. He is listed as a “Commercial Artist”, born on March 26, 1919. Perhaps he is the artist you seek?

Thank you Marcie. That is very promising and I'll follow up on your discovery.

From an article in the Western Mail, of Wednesday 8th August 1956, John Elwyn's full name was given as John Elwyn Davies. Apart from his artistic output he also lectured on art at Winchester Art School. He won a gold medal for art at that year's (1956) Eisteddfod.

The following Who's Who listing for Antony Lynn Hollaway references the artist having been taught by Jack Wright, a teacher at Bournemouth College of Art, between 1948 and 1953:

The attached is extracted from Robert Mayrick's 'John Elwyn'.

Many thanks to Kieran, Marcie, Andy and others for their contributions. I think we can say with confidence that we have identified the Jack Wright who painted both 'Cemetery in a Mountain Village, Sicily' held by Bradford Museums & Galleries and 'Landscape' held by Hampshire County Council. I'll summarise the research undertaken and will be submitting a recommendation that our findings be adopted.

This discussion calls for more information about the artist Jack Wright, known to have worked from circa 1950 to 1973.

Jack Wright was a painter, sculptor, and art teacher. He was born on 26th March 1919 in Ecclesall Bierlow, situated in the south-west corner of the city of Sheffield. He worked as a commercial artist in Sheffield during the mid to late 1930s and moved to London circa 1940, where he became friendly with fellow artist John Elwyn (1916-1997) and with Elwyn’s circle of artist friends. Jack Wright worked on the land during World War II. Post 1945 he settled in Christchurch in Hampshire, where he was a tutor at the Southern College of Art in Bournemouth from circa 1948. In June / July 1949 Jack Wright had a joint exhibition of paintings with John Elwyn at the Paul Alexander Gallery in Notting Hill, west London, where he showed seventeen works, mainly landscapes of views in and around the Bournemouth area but with some figure subjects too.

Wright was on the committee of the Bournemouth Arts Club (BAC) from 1959-1963 and submitted Spanish landscape paintings to the BAC shows in 1958 and 1959. He is also known to have painted in Italy. Jack Wright showed at the Royal Academy in 1954, 1955, and 1957 (the latter was a painting of Riaza in Spain). His exhibits there included a tempera painting of wagtails in Derbyshire and a carving in English walnut of a goat.

In 1974 Bradford Museums & Galleries acquired a painting from the artist, at which time he was living in Buxton, Derbyshire, and in that year they held an exhibition of his work at Manor House Museum, Ilkley, West Yorkshire, titled 'Jack Wright Paintings and Drawings'. The artist died in Sheffield in 1994.

It is recommended that the paintings 'Landscape' 1958, held by Hampshire County Council and 'Cemetery in a Mountain Village, Sicily', held by Bradford Museums and Galleries, be recorded as by the artist 'Jack Wright (1919-1994)'.

Grant, I have also emailed your recommendation directly to our Art Detective contact at the Collection for their response. David

Dr Gearóid Mac a' Ghobhainn, Collections Curator has commented: 'I have been following the discussion and all the hard work folk have been piecing together this jigsaw biography of Jack Wright. I am happy for this good research to be incorporated against the work we hold. I will also update our records to cover this information.'

Acquisition method
purchased from the artist, 1974