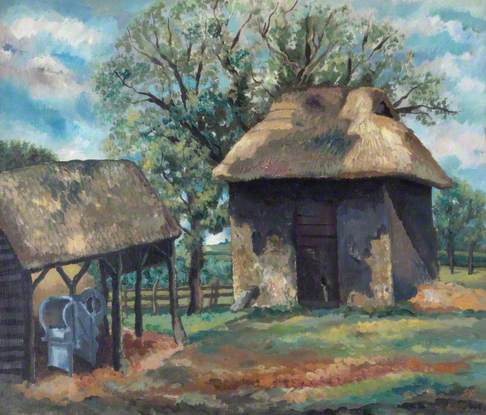 This artist is different to Allan Douglas Davidson (1873–1932), but we have no further information about him.

This discussion is now closed. The outcome of our request for more information on the artist, Douglas Davidson (1900–1960), is a biography that is now live on Art UK. A list of the biographies produced through Art Detective is available on our website. https://www.artuk.org/artdetective/resources/artist-biographies

I believe that Douglas Davidson was the second son of Thomas Davidson RA the celebrated 'history painter' and his wife Charlotte Douglas McHeath, (also an exhibited artist), and was a student at the RA.

The artist could be Douglas Leslie Gordon Davidson, the 5th son of Harrow School Master Henry Oliver Duncan Davidson and his wife Ethel Leslie Robinson. He was born on the 7th December 1900 and was baptised at Harrow on the 7th February 1901. He died at The Rotunda, Ickworth, Bury St. Edmunds, on the 8th May 1960, leaving an estate valued at €23,845/10/8. An Arthur Henry Gordon Davidson, National Trust curator, was his executor. This could have been his older brother, who is variously named Agnes, Angus and Arthur, as here.

He was cremated at Dry Drayton Crematorium, Cambridge, on the 11th May 1960, the application for the service having been made by his brother Angus (sic) Henry Gordon Davidson. On the cremation record, Douglas Leslie Gordon Davidson is described as being unmarried, aged 59, and also a National Trust curator.

There is evidence to show that Douglas Leslie Gordon Davidson went to Magdalene College, Cambridge:

Is he the Douglas Davidson who was a friend of Vanessa Bell?

This entry for a hand-decorated gramophone cabinet at a 2003 Christie’s auction indicates that he passed away in 1961, and includes some information about him.
https://tinyurl.com/27tmvn6s
“Davidson, a close friend of Duncan Grant and Vanessa Bell, was the brother of Angus Davidson, the translator and writer. His paintings were shown by the London Artists' Association and the London Group and he made decorations (still in situ) for George Ryland's rooms in King's College, Cambridge.”

It would further appear the Douglas and Angus Davidson were contributors to a history of the National Trust's house, Ickworth:

and that one of his paintings was collected by the economist John Maynard Keynes, between whom there is also evidence of a correspondence:

He is described as being self-taught and as having been introduced to the Bloomsbury Group by the sculptor Stephen Tomlin.

See also a references to him and the Bloomsbury Group here:

Several other results are returned when a Google Search is made fro "Douglas Davidson" + "Bloomsbury Group".

All of the above is assuming that he is the same artist as referenced in David's initial attachment from the 1939 Register.

Odd timing, Kieran. Douglas and his brother Angus were written about in the book “Duncan Grant” by Frances Spalding. I have attached some of the text.

" Douglas Davidson (1900-1960) - A contemporary of G. W. (Dadie) Rylands, Davidson was self-taught. David Garnett states that he was introduced to the Bloomsbury Group by Stephen Tomlin, the sculptor, with whom he had been at school (at Harrow), but it is equally likely that he met them through his Cambridge connections. In the twenties he lodged in Gordon Square with Duncan Grant and Vanessa Bell on the two top floors of their house. His principal surviving decorative work is in Dadie Ryland's room in King's (1927) which he and later (Dora) Carrington painted. He retired to take over the management of Ickworth when it was given to the National Trust, together with his brother Angus, who had been secretary to the London Artists' Association. He (Angus) wrote a "Life of Edward Lear". (Douglas) Died at Ickworth."

"Grant and Bell continued to produce designs for embroideries and rugs with the London Association of Artists, as did Douglas Davidson, three of whose rugs are in Dadie Rylands' room in King's, which he and (Dora) Carrington decorated."

Just odd timing because I was fact-gathering at the same time as you, Kieran. I had not updated this page because I was crafting my own comment. I’m glad that I was researching the same person.

Yes, we're all at it simultaneously as usual. He and (especially) his brother were Duncan Grant's lovers, a large and active club.

Davidson's more ebullient and successful earlier artistic endeavours in the late 20s and 30s were mainly with the London Artists' Association, which was really the preserve of the Charleston-Bloomsbury set. By 1948 (and having apparently not exhibited since c.1935-6) The Scotsman was sounding regretful that he seemed to have become artistically rather constrained, and had rather lost his youthful fire. See attached.

And another book extract, though I don't think there's anything much there that hasn't already been covered.

A couple of the newspaper stories call him a Scot. His family were certainly Scottish in origin, but he was definitely born at Harrow (and his father in India). Like all the Charleston set he was very well-bred and extremely well-connected - even the names of his contemporaries at prep school (as seen in the 1911 Census) were littered with titles and double-barrelled names.

Osmund's cited book extract referencing a Davidson rug in Duncan Grant's bedroom might be the rug one can see on page 113 of 'Charleston: A Bloomsbury house & garden' by Quentin Bell and Virginia Nicholson, first published by Frances Lincoln Limited in 1997.

Would it be possible for the Amgueddfa Cymru – National Museum Wales to check the accession register for 1954 please?
Somewhere in their collection, there should be at least one more painting by Douglas Davidson, other than the two already highlighted on here.

In 1954, approximately 160 paintings from the collection of Edward Marsh were distributed throughout museums and galleries in Britain, and across the world by the Contemporary Art Society .
One of these paintings was ‘Head of a Negro’ in oil by Douglas Davidson.

This can be seen in the In the extract from the 1954 Contemporary Art Society annual report and listed as having been given to to:
Cardiff (National Gallery, Wales)
Douglas Davidson Head of a Negro oil
i) CAS 1954

In the attachment from the CAS, a well known painting by James Dickson Innes of ‘Arenig” is also listed as being given by the Contemporary Art Society from the collection of Edward Marsh. This has an acquisition method on ArtUK as being “gift from Sir Edward Marsh 1954”

Here is some information about Douglas Davidson’s Scottish connection.

The Patricia Preece 'Still Life' on Elin's CAS list doesn't seem to be on ArtUK either and neither it nor ' Head of a Negro' are on the Collection's site.

These may have been placed in the Schools Service apparently

Elin and Mark, the Collection has been emailed the related questions and I will report back as soon as any information become available. David

Thanks David. Am afraid I didn’t know whether to post about the Patricia Preece Painting on this discussion or start another one as it’s a little unusual.

It’s quite unexpected to learn that it’s currently thought that the majority of her paintings, even the work exhibited under the name of Patricia Preece at the Royal Academy, are considered to potentially be by the work of another artist called Dorothy Hepworth. This is the reason I suspect that they are both listed together on ArtUk, when looking for either or. Patricia and Dorothy were life-long partners and both graduates from the Slade school.

The NMW website was also checked for both artists but unfortunately, neither were listed as being a part of the collection. Although, the profile for Patricia Preece on ArtUK also mentions that
“Although Augustus John thought highly of her work and she exhibited at Warren, Leicester, Lefevre and Leger Galleries and has work in public galleries in Cardiff and Swansea”

The information I provided above Patricia Preece and Cardiff came from a former Keeper of Art at the National Museum of Wales, who was there quite some time ago. When he arrived, he found that records of works placed in the Schools service [this may not be the correct nomenclature] were difficult to understand or not properly kept and certain works proved impossible to trace or find. I was myself interviewed for a job there earlier and was taken around the stores which were chaotic - on which I remarked at the interview - I did not get the job!
This does not surprise me at all from my own experience as a curator elswehere . In my case it was not possible for me to see and check works in isolation hospitals and nuclear power stations and other such places - and altogether it was difficult to follow the movements of works placed in or lent to buildings not under museum/gallery control
I have little doubt that lack of staff means that problems of this kind in some institutions with large collecions

The Collection has provided this update: 'Having looked at our CMS we can see that in 1954 we indeed acquired the James Dickinson Innes work (NMW A 202 Arenig) from the collection of Edward Marsh.

We have been sporadically working on cataloguing the Museum’s Outreach (/schools) collection that is held at our offsite store and have not yet come across anything that could be this work by Davidson, nor is it listed in the existing paper catalogue we have been working from. Apologies not to have more info to share, but we will keep an eye out in case it shows up at the offsite store. There are still several paintings for me to work through there.'

Osmund, Kieran and Marcie have all helped sketch out more about Douglas Davidson (1900–1960), the original objective behind this discussion. As this painting is from the National Museum Wales where Art Detective Group Leader for Wales, Artists and Subjects, Melanie Polledori is Curator, would it make sense that another Art Detective Group Leader makes a Group Leader recommendation that can be presented to National Museum Wales and Melanie?

Pieter, thank you for the biographical summary.

The original question here was 'can we find more on Douglas Davidson': that has been done and summarised.

Quickly skimming back above two other issues seem to have arisen:

1. There whereabouts - now unclear in some cases - of other paintings distributed to various galleries by the Contemporary Art Society, including 'Head of a Negro' by Davidson.

2. Apparent National Museum of Wales uncertainty - if that is how David Saywell's note of 08/09/2021 10:58 is to be read - as to where they have currently stored Davidson's 'Black Barn' owing to a slip in records. We can only hope it will just prove to be that.

Both (esp. 2) are curatorial issues for those concerned but neither is relevant to the question asked here: it has been answered so perhaps this discussion could now close?

Pieter, thank you for your summary. The biography is live on Art UK now. https://artuk.org/discover/artists/davidson-douglas-19001960

I will follow up on David's earlier email to the CAS about those other paintings.