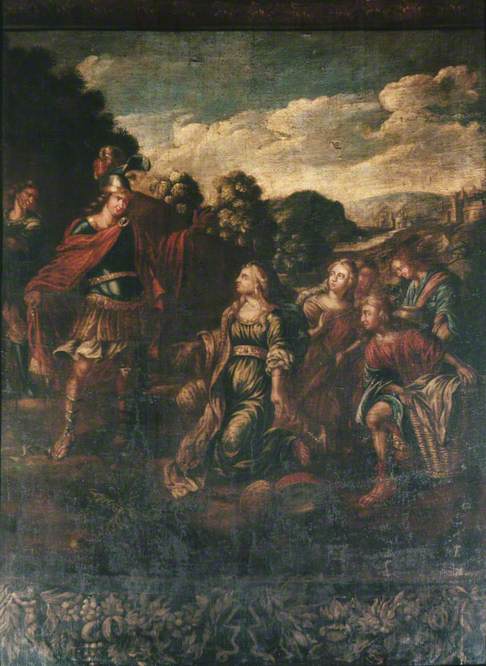 This painting of 'David and Abigail' is by an unknown artist or group of artists, and forms part of the five Old Testament scenes known as ‘The King’s Paintings’ at the University of Aberdeen. Documentary information on the early history of this set is extremely limited, but paint analysis tests undertaken on samples from each of the paintings indicate that they date from the mid-seventeenth century; one plausible suggestion is that the set was produced by journeyman painters local to the East of Scotland, and was displayed at Gowrie House in Perth during Charles II’s brief stay there in 1650–51.

Woodcut and engraved sources have been traced for the other four paintings in the set, but any source for 'David and Abigail' remains elusive – can anyone help?

What were the other sources drawn on for this set of paintings? The information might help in directing avenues or research

There are four other paintings in the set, all of which can be viewed on Your Paintings:

‘David and Goliath’ (after a woodcut by ‘Master connected to the Protestant Reformation Era Writings’ found in "Biblia, ad vetustissima exemplaria: nunc recens castigata", published in Antwerp in 1570).

‘The Judgment of Solomon’ (after an engraving by Boetius Adams Bolswert, after Rubens, published c.1630).

‘Solomon and the Queen of Sheba’ (after an engraving by Mattheus Merian the Elder, in "Icones Biblicae", published in Stuttgart 1525 and 1630).

‘Jephthah and his Daugher’ (after an engraving by Mattheus Merian the Elder, in "Icones Biblicae", published in Stuttgart 1525 and 1630).

Research into the paintings, their iconography and sources has most recently been carried out by Dr Mary Pryor and Prof John Morrison, my colleagues at the University of Aberdeen. Although there’s a great deal about the King’s Paintings which may have to remain as conjecture, eg. questions as to who painted them and why, we’re hoping that it will be possible to trace a source or sources for ‘David and Abigail’, and fill out a bit more knowledge about the circulation of printed images in seventeenth-century Scotland.

Art UK links to the four other paintings in this set:

As Helen noted in her last comment, the sources for these paintings are Flemish and German.

The Aberdeen Evening Express reported in January 2019 that these paintings were being conserved, with the last due to return to Aberdeen in late summer. I'll ask the collection to send us a post-conservation image to work from.
https://www.eveningexpress.co.uk/fp/news/local/aberdeen-university-set-to-bring-black-paintings-back-into-the-light/

The King's Paintings are still in the conservation studio, progress having been slower than expected. The collection will send new images to Art UK once the work is done.

This was still in the conservation studio in December 2020, but hopefully later this year such projects can start moving again.

Images of the proposed sources:

‘The Judgment of Solomon’ (after an engraving by Boetius Adams Bolswert, after Rubens, published c.1630). https://bit.ly/3jDgkVY

‘Jephthah and his Daughter’ (after an engraving by Mattheus Merian the Elder, in "Icones Biblicae", published in Stuttgart 1525 and 1630). https://bit.ly/3jED6fS

The versions of David and Abigail at the British Museum (https://bit.ly/3cYLZjl) will have been considered, which include one from ‘Icones Biblicae’ 1625–1630 (which appears in reverse in 1659, p.178 https://bit.ly/3tJkHTX).