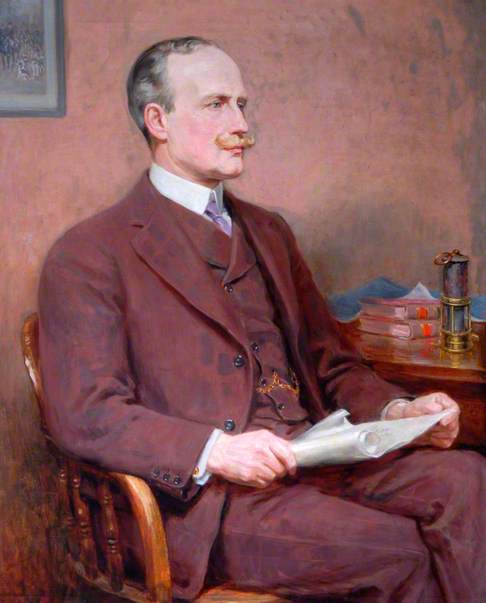 Photo credit: The North of England Institute of Mining and Mechanical Engineers

The unattributed painting was probably presented to the North of England Institute of Mining and Mechanical Engineers at the end of his Presidential term of office in 1912–14. He joined the Institute in 1876 having studied at the College of Physical Science which was based in the Institute's premises and Library. He received the G. C. Greenwell Medal, awarded for advances in the art and science of mining in 1906. After war service – although not in the front kine due ill health, he became President of the (federated) Institute of Mining Engineers (also based in the Mining Institute in Newcastle) in 1919–1920.

Its colour suggests an artist familiar with the paintings of the Camden Town Group, and its quality such that one might find it exhibited in the National Portrait Society or the Royal Society of Portrait Painters

Attached is a newspaper article from the Sunderland Daily Echo dated 26 Sep 1935 concerning the gifts that he left in his will - it mentions the portrait, saying the artist was Ralph Hedley

There is a long article in the Newcastle Journal dated 1 Jun 1914 about Blackett, with a picture - it says he received a series of presentations in 1908 on completing 25 years service. It does not mention the portrait, but perhaps it was then?

This painting certainly appears very much in the style of Ralph Hedley, RBA (1848-1913). A major loan exhibition of Hedley's work was staged at the Laing Art Gallery in 1938 and in 1990 the gallery mounted yet another exhibition of his work (a catalogue accompanied this show).
Anthony J Lester, FRSA

I would disagree with Mr Lester. For this seems to be by an artist of a different generation than Ralph Hedley's whose paintings are steeped in late 19th century realism stemming from the Hague and Barbizon Schools. Was the 1908 picture another portrait?

Martin, whatever the stylistic anomalies, it seems extremely unlikely that Blackett would have left his portrait to the NEIMME in 1935 if they had one already. If it is not the portrait by Hedley, it can really only have been a later, unwanted gift by someone else - conceivable, I suppose...but then where is the Hedley portrait? Another possibility might have been that its identity was confused at some later point, and that it isn't a portrait of Blackett at all...however there's a photo of him here, and it's clearly the same man: http://www.aimehq.org/programs/award/bio/william-cuthbert-blackett-deceased-1935

Now, while at first glance the style is not typical of Hedley in high-Victorian mode, there are a few pointers that make it more likely:

First, Hedley was very fond of seated portraits, and/or tables with lots of objects on them; and as a woodcarver as well as painter, he consistently rendered the detail and patina of the ever-present furniture with some skill.

Second, the image seems to me slightly odd and perhaps brighter than the original...it looks a bit washed out, in fact. The curious blotches on his suit surely cannot be right: is this because of the image, or has some over-cleaning taken place? Either way, the result MAY be even less Victorian gloom and detail (and an even more 'modern' look) than the artist intended.

Third, the portraits by Hedley viewable on Your Paintings do show an evolving style, though the evolution is not linear - perhaps the result of his municipal clients' continued demand for good 'old-fashioned' portraits. But I would particularly draw attention to this portrait by him dated 1912, of the former Master of University College, Durham: http://www.bbc.co.uk/arts/yourpaintings/paintings/alfred-plummer-18411926-dd-47671

In this late portrait, in fact one of his last (he died the following year), the style has moved away from C19th realism and classical late-Victorian gloominess - in both colouring and looseness of handling, this is a modern picture (though he still cannot resist a more precise depiction of gleaming, well-polished wood). And perhaps it's more than coincidence that the sitter, Alfred Plummer, probably knew Blackett well - he was Master when Blackett was a student at the university. Throughout the relevant period, incidentally, Blackett lived just 15 miles from Newcastle, where Hedley was based.

I believe that this IS the work by Ralph Hedley that Paul Kettlewell has cleverly ferreted out, and that it dates from...well, perhaps circa 1908 when the presentations were made, but possibly up to four years or so later. Let's hope it does turn out to have been exhibited somewhere.

I agree that the portrait of Blackett at the North of England Institute of Mining and Mechanical Engineers is most likely by Ralph Hedley, and that is a late work.

Hedley died in June 1913 and for the last 15 years or so of his life his painting had become increasingly fluid and he took more interest in effects of light and shade. His portraits however were frequently noticably more stiff and formal.

Osmund Bullock draws a comparison with Hedley's 1912 portrait of the former Master of University College, Durham, and a similar comparison may be drawn with Hedley's portrait of Alderman John Robert Lawson of South Shields - also to be found on Your Paintings. All three of these portraits show a stiffness in the drawing, and attached is a further example, from 1903 - a portrait of Hedley's solicitor J.G. Wilson, and his son.

The Literary & Philosophical Society, and The North of England Institute of Mining and Mechanical Engineers, 21/09/2014 18:09

Thank you all for your comments. The portrait of Blackett shows him with a safety lamp and two copies of the Institute's transactions. My belief is that this does date from 1908-1912 after he completed his Presidency. This would place the date of painting at the end of Ralph Hedley's career and accords with the comments above. The Library of the Mining Institute, in which the portrait now hangs, was designed with the specific intention of busts and portraits of great mining engineers adorning the walls, which Blackett of course will have known. I think with the expert comment from the contributors to the discussion, we can be confident the artists has now been attributed and Paul Kettlewells snippet from the Sunderland Echon seems conclusive proof. The Mining Institute does own five Hedley drawings and may have commissioned the portrait alongside the presentation of the Greenwell Medal. The Mining Institute does not have another portrait of Blackett (other then a photograph taken during his presidential year). That said, the Institute's building, Neville Hall, was adorned with many other portraits that belonged to the Northumberland and Durham Coal Owners Associations which appear to have been lost, possibly when the National Coal Board relocated to team Valley in the mid-late 1950's. However, I am inclined to think this is the only one likely to have been of Blackett and am therefore content that we may attribute the painting of Colonel Blackett to Ralph Hedley and in the date range 1908-1912. Thank you very much to everyone who has contributed.

Collection
The North of England Institute of Mining and Mechanical Engineers

Location
The North of England Institute of Mining and Mechanical Engineers