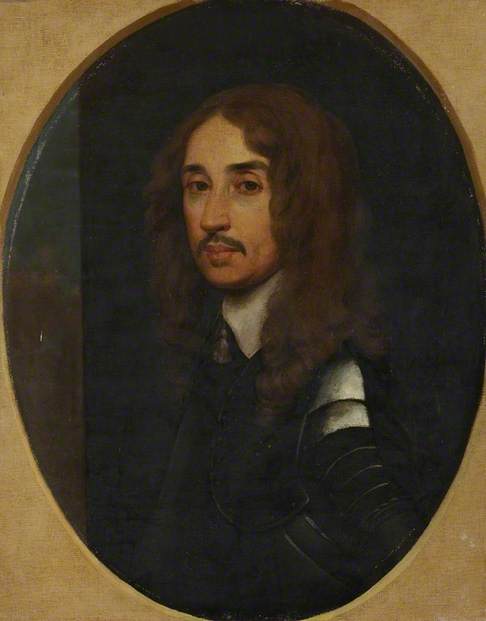 The Collection has commented: This is a half-length portrait of one of the Anthony Kynnersleys - a copy of a portrait originally painted by an unknown artist around in the 17th century. The sitter's clothing is typical of those worn in similarly formal portraiture during this period.

The attribution of this sitter is based on a chalk marking on the rear of the canvas, whilst the wooden stretcher is marked in pencil with 'Leighton Hall'- the home of his descendants. Which of the Anthony Kynnersleys it shows is unknown, but is either the one who died in 1662, or the one who lived 1662—1695.

This painting is probably a later copy of an earlier painting, most likely completed by the same copyist who painted this portrait (FA.00749) https://bit.ly/3mTpPBY and the one of Captain Anthony Kynnersley (FA.00759) https://bit.ly/3mUqrah. The canvasses used in each are identical in size and each use the trompe l'oeil oval frame whilst its rear contains a stamp indicating that the canvas came from John B. Smith's painting supplies company of London. This stamp is present on all three canvasses with exactly the same errant smudges, reading: ‘John B. Smith, Artist’s Colorman, Manufacturer and Importer, 117, Hampstead Rd., London’.

John Bryce Smith, the owner of this company, lived between 1850 and 1931, whilst the company itself did not exist until John Bryce’s father John established it in 1848. More so, John Smith did not take over the company (from his father) until 1883, and this kind of stamp only appears on his canvasses in the mid-1890s to mid-1900s.

It is difficult to know why the copies were produced, but it may be linked to the refurbishment of Leighton Hall in the late 1880s.

I'm assuming that this man is over twenty, which he surely is - probably quite a bit over twenty. If the subject were the second Anthony Kynnersley, the original would have been painted at the earliest in the mid 1680s. However, the hairstyle does not fit the style of that decade or any time later, when men's hair (and wigs) tended to be piled up in rather higher heaps of curls. This more relaxed hairstyle is surely of an earlier period, as is the sober collar. I suspect that the original could have been painted perhaps as early as the 1640s and surely no later than mid 1660s.

Given that range, and if it has to be one of the Anthony Kynnersleys, then it's surely the earlier one.

What is known of the earlier Kynnersley? The armour implies he was a military man. Which side was he on in the Civil War?

If this is indeed a copy of an earlier painting, that original painting may have been done by the Englishman Peter Troilus, who painted at Pitchford Hall, also near Shrewsbury, between c. 1633 and 1636.
So far as I can tell from this rather dark image on the screen, the clothing would not be out of place for that time, and Troilus was doing at least one portrait at Pitchford, that of Marie Nichols at an appropriate time. I have not seen any of his surviving works, or have access to useful images, so as to make comparisons, though a later copy of his work would not in any event necessarily capture his style or brushwork.
Troilus is widely but sparsely documented, and I raise the possibility of his hand at work on the original solely from the coincidence of time and place. My Early Modern British Painters data base [http://spectrum.library.concordia.ca/980096] lists the following sources for him:
National Portrait Gallery, Heinz Archive painter files, vide Troilus/Troueil/Troncil, Peter/Petrus; Christopher Wright, Catherine Gordon and Mary Peskett Smith, eds., British and Irish Paintings in Public Collections (New Haven and London, 2006), p. 775; John Steegman, A Survey of Portraits in Welsh Houses (2 vols., Cardiff, 1958, 1963), pp. 273-4.; Ellis Waterhouse, The Dictionary of 16th and 17th Century British Painters, (1988), p. 264.

Come to think of it, being a captain also implies being a military man--sorry for the lapse. Does the collection know the year the earlier candidate was born or how old he was when he died?

One possibility for the painter of the original, especially if the sitter was on Cromwell's side, is Robert Walker, the favourite portraitist of the Parliamentarians during the Interregnum.

If it were in slightly better condition, without later interference and with a clearer image, it could be Robert Walker. Trying hard to emulate William Dobson.
I agree with Jacinto

Interesting picture, can we get a higher resolution photo? Thanks.