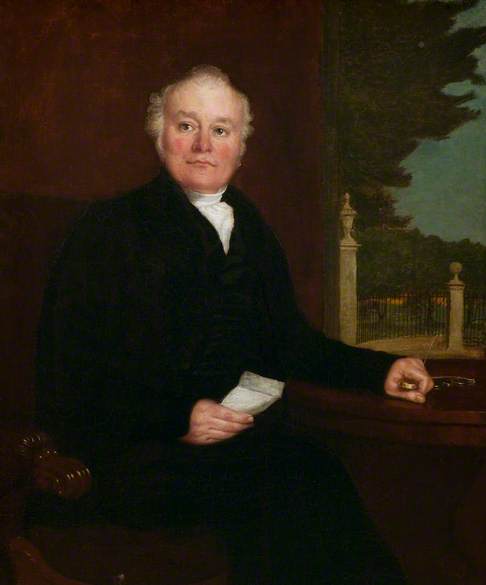 The attached newspaper article from the Leicester Chronicle dated 22 Dec 1849 suggests that the artist could be Mr William Scott.

Art UK has commented: ‘Someone else has suggested: John Hollins ARA, Royal Academy 1837 no 462 John Ellis’ https://bit.ly/2TbT1cN
The Collection has commented: ‘I'm afraid it's impossible to say, especially as we are aware of at least one other portrait of Ellis and by yet another artist - we have a print of it, the original being painted by John Lucas [unillustrated impression https://bit.ly/3f4ym2v]. He seems to have been someone who had his portrait painted a number of times. Without an illustration in the Chronicle or RA catalogue we can't say whether this painting is either of them, or even neither!’

Here is the Lucas portrait of Ellis:

Hollins seems to have painted in the manner of Lawrence as late as 1850 (see below), which is not the case in our portrait:

The Leicester portrait seems more provincial, which would favor Scott (although Ellis may have also sat for some other artist/s).

I had wondered if the gates were to Belgrave Hall, which would help narrow down a date range for the portrait.

Below is one of the other portraits by William Scott (1797-1862) referred to in the Leicester Chronicle article:

Here are the others by or attributed to him on Art UK:

If the background shows Belgrave Hall, which is possible, that means the picture is no earlier than 1847, when John Ellis took possession of it. This could fit the William Scott portrait. Compare below:

Here's an enlargement of the relevant image from the above link:

The portrait may have been made in conjunction with Ellis being elected to Parliament in 1848.

Is there anything inscribed on the piece of paper that Ellis is holding?

Also, attached is an image of the gates into what is now Belgrave Gardens in Leicester, with Belgrave House to the left side. The railings and gate posts, with their architectural decorations, appear to be a direct match.

Actually, Ellis moved into Belgrave Hall in May 1846, according to the collection's information. This picture was a gift from a presumed descendant, Edith Ellis, in 1951.

Based on his works on Art UK, Scott was not especially good at painting hands, as is the case in our portrait.

Given the depiction of the gates at Belgrave Hall, we can date this portrait to 1846 or later, probably only a few years later, and definitely younger than in the 1858 portrait by John Lucas (post, Jacinto, 21 May).

As such our portrait could possibly be that mentioned as by William Scott in the Leicester Chronicle, 22 Dec 1849 (post, outset of this discussion).

The portrait is not inconsistent with what is little is known of Scott's output. But the evidence does not allow us to do more than suggest that the artist could be termed as "Attributed to William Scott".

Unless further information is forthcoming, I suggest that we should move towards closing this discussion.

This reminds me a bit of the Scottish artist John Zephaniah Bell [1794-1883] on whom Helen Smailes published a short monograph for the National Gallery of Scotland in 1990
What do we know of the life of the sitter? Bell was a member of the Sandemanian sect and some of his commissions came from Sandemanians. Faraday and Wiiliam Godwin were members

Interesting idea, John Zephaniah Bell, but not a runner without evidence. I've been back to Helen Smailes' short monograph. It seems to me, firstly that Bell's portraits are more close focused, often with a dark background and taken closer to the subject, apart from differences in handling. And secondly there is no obvious link between Quaker Ellis and Sandemanian Bell.

As to Ellis's life, see

Jacob, alas, your link is not working.

A side issue, but what is he holding? See attached detail, which I hope enlarges but a higher res really needed: a 'railway item'?

Pieter, that detail as requested. David

Jacob, further to your comment 10/07/21 I have asked the Collection for their thoughts to date. Jacob

Thanks for the detail: not as 'railway' as I'd hoped - just his spectacles lying on the table, of which he is perhaps holding the metal case.

Description
John Ellis farmed at Beaumont Leys, Leicester from 1807, then moved to Belgrave Hall in May 1846 where he lived until his death. He was promoter of the Leicester and Swannington Railway, and deputy chairman of Midland Railway and known as 'Railway John'. He was a Quaker and a liberal reformer, elected to the Town Council in 1836 and as a Member of Parliament for the County in 1848.