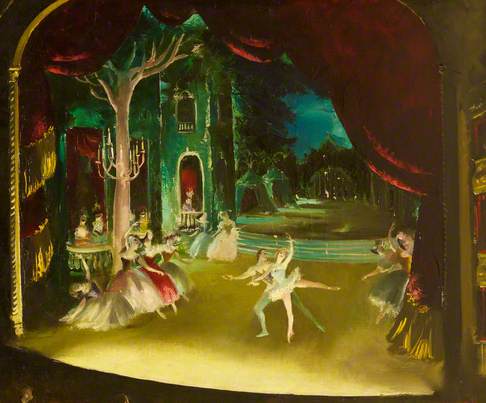 Zinkeisen painted 'Dance from Act II, Giselle' which she exhibited at the Russell-Cotes Museum Art Gallery 'The Art of Dancing' (29 March-31 May 1958, no 886 priced at 200 guineas). Is the ballerina Alicia Markova and her partner the Dane Erik Bruhn? The location seems to be the Royal Opera House.

Doris Z did a very similarar painting called Nocturno????
The Royal Opera cast list for Giselle !958 is online-Giselle _Rowena Jackson. Markova may have been a guest dancer,but was near the end of her career in 1959.

This dos not look like Giselle to me, especially not Act II.

Martin, since the question is which ballet this illustrates, I assume the reference to a depiction of Giselle refers to a different picture.

Jacinto, I think that you are right. Obviously one needs to know which ballet this to progress towards its date.

It is not Giselle. The scenery and costumes do not fit either Act I or II.

Of course, it could be a generic ballet scene as opposed to a specific ballet, especially if such a general title is what the artist gave it.

Dora Zinkeisen painted a fair number of ballet pictures, but she does not seem to have focused on specific dancers and only sometimes on specific ballets, so the titles can be general ones as in our picture. I found something similar to the Cardiff picture titled "Ballerinas" (below):

I am inclined to believe that our picture is not of a specific ballet or of specific dancers, but simply a ballet scene. The emphasis on the staging no doubt reflects that Zinkeisen was best known as a designer for the theatre.

I expect that, to the artist, the dancers may have been akin to human props, meaning part or elements of the stage picture presented to the audience, which was her chief concern as a set and costume designer. In other words, it probably didn't matter who they were so much as what they looked like. Again, I doubt she was portraying specific dancers here, though no doubt she'd seen a great many.

It appears to show the ball scene from the 1948 production of Frederick Ashton's Cinderella, designed by Jean-Denis Malclès https://hprints.com/en/item/76856/Jean-Denis-Malcles-1948-Scenery-Costumes-for-Cinderella-Ballet

Details of performances are listed here so perhaps it is possible to date the painting from this or exhibition records http://www.rohcollections.org.uk/production.aspx?production=1687&row=0

Ashton was not the Prince but one of the stepsisters. In the cast list above the Prince was Michael Somes.

23 December 1948 was the date of Cinderella's premiere.

I wonder if the venue depicted is the Royal Opera House. The first composite, showing Zinkeisen's painting beside the design by Jean-Denis Malclès, shows significant differences between the two sets (number of trees, absence of chandeliers and balustrades, as well as curved second level on stage in her rendering compared to the straight one in his. Most significantly, though, is the fact that the ROH does not have a curved proscenium arch, whereas one is very evident in Zinkeisen work.

As it happens, a production of Cinderella, starring George Formby as Buttons, opened on the 27th December 1948, with costume designs by Zinkeisen. It took place at the Empire Theatre, Liverpool, a review of which, from the Liverpool Echo of Tuesday 28th December, is attached.

The second composite, showing this painting beside photos of the stages of the Empire Theatre and the Royal Opera House, is attached for consideration.

It is far more likely that Zinkeisen's painting is of her own Liverpool production than of the one in the ROH, even though the stage props and sets do look similar.

The painting in Cardiff seems to have an indication of the tiers of seating at the right, right next to the proscenium, which the Liverpool Empire does not have,

Would the Opera House have loaned their production?

That is a very good point. I suppose the other question would be whether the Liverpool pantomime would have had such a large corps of ballet dancers.

If it was a production design rather than a performance record it could, of course, be a fantasy image.

Attached, from the The Sketch of Wednesday 5th January 1949, is a photo spread from the ROH production.

Are are more photos, from The Sphere of Saturday 8th January 1949.

'Are are' should have read 'Here are'

I favour the case for a general recollection of the Covent Garden ballet setting, tempered by memory of Liverpool (or other) proscenium stages. The only counter-proof would be record of the Sadler's Wells company touring the production anywhere else that would fit. That in itself would also to some degree be limited by the settings: you need big stages to take scenery made for either Covent Garden or Drury Lane. One would also not usually find scenery for a ballet of Cinderella being used for a pantomime, or vice-versa, nor what certainly looks like a classical ballet corps in Zinkeisen's image being used in a pantomime. The set shown is also too close to the design by Macles (well found, Alistair) to be intended as anything else.

There is no obvious record in the BNA that Sadler's Wells toured their production of Cinderella to the regions in 1949 or 1950.

Attached is a feature, with colour photographs, from the llustrated London News of Saturday 2nd April 1949, of the ROH production of the ballet.

At the bottom of Kieran's cutting
Frederick Ashton's Cinderella one of Sadler's Wells Ballet's Greatest Triumphs. !!!!

I think the Curtains clearly point to the ROH.
By the way- don't forget there were two Zinkeisen sisters-Doris who painted,and Anna who designed Ballet Costumes.
Secondly- I wonder if scenery was stored and re-used at this time -1948- due to severe shortages of building matierials after the War I think it a distinct possibility- but I do not know.

Frederick Ashton produced "Nocturne" -music by Delius - at the ROH in March 1946. Probably the painting Nocturno by Doris Z.

The archive collection for the Sadler's Wells company is held at Finsbury Library:

They appear to have a large collection of photographs of productions and sets from the 1930s onwards. Given the apparent importance and success of their 1948 'Cinderella', it would be surprising if some matches to this painting's specific scene from Maclès designs and its costumes were not included.

It is normal to keep scenery (Louis) while a specific production remains likely to be performed and occasionally elements are kept for 'stock' (though that's more an 18th and early 19th-century practice). Drop cloths, including act-drops (which can be rolled) also tend to survive for other reasons, which is why the V&A has Picasso's for 'Train Bleu' and at least one other for the Ballets Russes: there are a few surviving 19th c ones too. Beyond that it's unusual (historically speaking) for it to last long, with standard reusable elements like flats and cloths being overpainted until time-expired. If productions tour, any of the original scenery taken of course needs to fit the stages being used, though not usually a 20th c. issue.