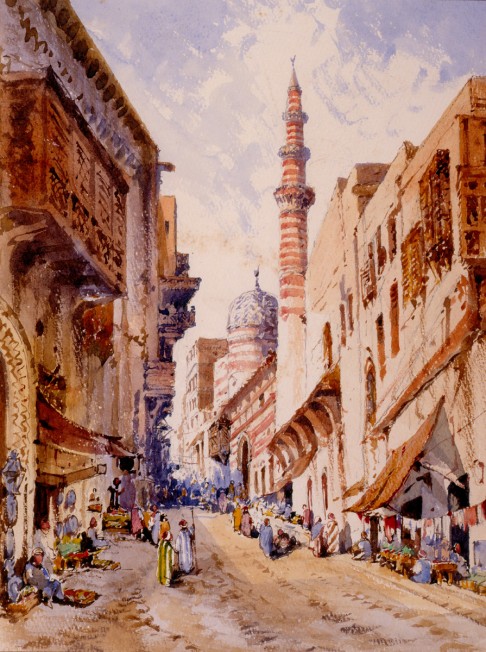 While browsing the Russell-Cotes Art Gallery's recently added works on paper, I came across this scene.

Perhaps the location could be identified, along with the artist – could it be by Consalvo Carelli (1818–1900)? http://artuk.org/discover/artists/carelli-consalvo-18181900

Here is what appears to be Consalvo Carelli's signature: https://www.artsignaturedictionary.com/artist/consalvo.carelli

The collection note: 'We don't know much about this work or the artist but it could be one and the same artist. Although the Modes entry says this work is signed there does not appear to be signature on it that I can see. The work is mounted, framed and glazed and so the signature may be hidden.'

This discussion is now closed. This painting has now been re-attributed to Gabriel Carelli (1820–1900). This change will be visible on Art UK in due course.

Maybe the signature refers properly more (for colours , the brush strokes and subject ) to the artist Augusto Corelli (Rome 1818 - 1918) instead than Consalvo Carelli ?

Gabriele Carelli painted Eastern subjects. Consalvo seem not to have done, but came to England and painted Dover in 1844.Gabriele painted Constantinople, Cairo, Assiout, Luxor, Algiers, Tunis, Marrakesh, Morocco and Tangier. A very prolific artist he seems to be the most likely Carelli.

His dates 1821- 1900 . The minaret and mosque must be quite easily identifiable. Gabriel Carelli was in England from 1847 to 1848 . The Duke of Devonshire received him at Chatswoth and was his patron. He exhibited at the Graves, Dudley and RA. There are works by him in the RIBA and at Osborne House and at Windsor Castle. He frequently exhibited in Britain between 1866 and 1892, Paul Nicholls may well be able to say much more.

There is a book on his family by E M Eleuteri, I Carelli. Una generazione di pittori, Rome [ not dated, but after 1967] - this information from Paul Nicholls. He exhibited in Cork and Manchester as well as in London. Paul has traced him at various London addresses from 1866 to 1891. He was in Glasgow 1867-68 . He was also regularly in Kenilworth between 1868 and 1883. Could Mrs Heading have been a descendant of H Hicks,Woodcote, Kenilworth?

According to the record of his marriage (at Paisley, Scotland, in 1868) his full names were Gabriel Marino Nicola Carelli (the 'Gabriel' having been anglicised). He died in Dec 1900 at his home in Menton, though he had another in London's Belgravia. Consalvo Carelli (sometimes known as 'Gonsalvo') was his elder brother, and they (with a third one, also an artist) were from a well-known family of painters in Naples, where Gabriel(e) exhibited as early as 1843. In his youth Gabriele was mainly a painter of interiors - there is quite a lot about his origins and early career in Lord Napier's 1855 'Notes on Modern Painting at Naples': http://bit.ly/2lgsaXI .

Gabriel(e) had a son, Conrad Hector Raphael Carelli, whose life after his 1915 marriage was mainly in London, where he died in June 1956. He was baptised (at Calais) in March 1869, and after training in Paris began exhibiting in London from the early 1890s - his watercolours are in much the same style as his father's, but usually distinguishable as both (?always) signed their work ('Gab. Carelli' and 'Conrad [HR] Carelli' respectively).

Both father and son painted extensively in the Near/Middle East, including Cairo, which is where I think this is - or where it is meant to be. However, after looking at a lot of similar images (old and new), I'm not wholly convinced it's a genuine view - it has much in common with how the old city looked in places like Boulak and Mousky and the Bab El-Wazir, but I can't see anything that quite matches the minaret. Here are two Cairo views in the same vein by John Varley II - it could almost be a conflation of them: http://bit.ly/2l4As6C & http://bit.ly/2kyHMc0

Here, too, is a similar Cairo one by Gabriel himself http://bit.ly/2lWGvIR , and here's something comparable (though not of Cairo) by Conrad http://bit.ly/2kyyzkb . The signatures are clear on both. If our one just says 'Carelli' (or even worse 'Carrelli'), then I wonder if it's authentic - compared with the examples above, the perspective (amongst other things) is very poor. These Orientalist watercolours used to be very saleable - could it just be a pastiche by a lesser hand? Or perhaps Conrad just got lazier and more slapdash in later years - this one has rather the same 1950s-Bayswater-Rd-railings feel to it: http://artnt.cm/2lu6eek

The Victoria and Albert Museum has some watercolours by Gabriel Carelli in the Searight collection , two of them showing mosques. The Graves Gallery in London held a memorial exhibition of his work in 1902. A copy of this catalogue is in the National Art Library. The book by Eleuteri is in that library too.
Also there are the catalogues of two exhibitions of the Searight collection in 1971 [Leighton House] and 1980 [Talbot Rice Centre,University of Edinburgh] . The Muslim World, 169 microfiches published by Emmett Publishing 1989-90 includes the Searight collection - these are also in the National Art Library
Queen Victoria's Carellis are probably to be found in Oliver Millar and Delia Millar's catalogues of the Royal collection's Victorian paintings and watercolours [1992 and 1995]

In my opinion, must be Gabriele Carelli (Naples 1820-London 1900), son of Raffaele and brother of Gonsalvo (or Consalvo) and Giuseppe.

Known chiefly for watercolours of architectural subjects. This probably done in Algiers, as he exhibited A Moorish colony in Algiers at the Royal Manchester Institution in 1882.

Provenance possibly H.Hicks, Woodcote, Kenilworth, who was his English agent. Exhibited at the R.A, in 1875 and 1877.

Reviewing the contributions above, I think the signature, not visible in the image, could determine the correct attribution. Certainly Osmund Bullock's informed comment leaves the matter uncertain.

Some watercolours by Gabriel Carelli, such as one of the V&A's (http://media.vam.ac.uk/media/thira/collection_images/2012FE/2012FE9456.jpg) and http://www.artnet.com/artists/gabriel-carelli/venice-tIiLLRcSeXTrkvIXjQPStw2, seem to share the dodgy perspective seen in the Russell-Cotes watercolour when he is attempting severe foreshortening. I too feel Gabriel is most likely.

The 'Mosque of Umm es [sic] Sultan' (i.e. Umm al-Sultan) may be this one amongst those at the V&A: http://bit.ly/2kGWd9h . Also signed 'Gab. Carelli'. Again, though, to my eye it shows superior draughtsmanship to the one under discussion. The V&A also holds (in the same collection) a number by the son, Conrad, though none has an image.

The V&A (which wrongly accords him the status of ‘RA’) gives slightly different middle names for Gabriel, as does the Royal Collection: ‘Mariano Nicolai’. Their version may perhaps derive from good Italian information; but I have checked the original Scottish statutory register image for his 1868 marriage (attached), and although the resolution is extremely poor, it does look more like ‘Marino Nicola’ (as also transcribed by FamilySearch).

The V & A mosque does not seem to so many 'balconies' as the mosque in this watercolour.

Sorry, Martin, I wasn't clear. I'm not suggesting it for ours - just that it might be the one of that name in your list from the memorial Exhibition, and thus eliminated from the possibilities.

Anyway, Carelli were members of the same family, or not? Despite not having here a catalogue with me , I have probably solved the mistake connected with the surname ...with philology. Despite this small reflection , after seeing some artworks of Gabriele Mariano Nicolai Carelli, I agree completely with this identification supported here over.

Mr. Bullock, I had a bit of trouble fitting the painting to the Umm al-Sultan Shaaban Mosque and Madras drawings (https://archnet.org/sites/5785/publications/1887). I ask that you consider The Mosque of Aytmish El-Bagasi as an alternative location.

I take heed of Osmund Bullock's warning that this might well be a pastiche by a later hand, as this type of watercolour once enjoyed good commercial currency. Watercolours with convincing signatures both by father, Gabriel, and son, Conrad, all seem to be competently executed and without the lapse in perspective observable here. If it is unsigned, or if the signature is wrong, architectural identification in itself may prove uninfluential in establishing authorship. I think a complete image, without the mount, and also of the reverse, might save a lot of time.

It will be either Gabriel or Conrad H.R Carelli. I have two groups of Facebook with quite a lot of examples of their works.

It is true that some of the descriptions on the reverse sides are difficult to read.

Please feel free to look at the Facebook pages, the groups are publicly visible.

I recommend that we draw this discussion to a close and attribute the watercolour to Gabriel Carelli.

Probably for the best until any other information comes to light.