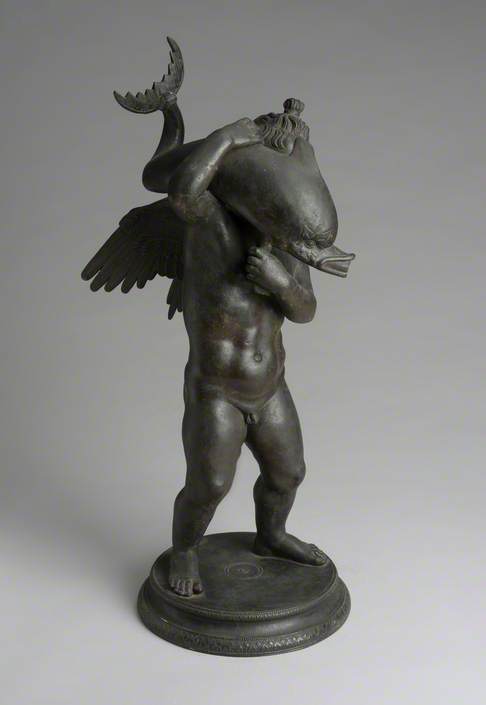 The original of this bronze copy was discovered during an excavation at Pompeii, in Italy, as reported in ‘The Graphic’ of the 5th November 1881:
https://d3d00swyhr67nd.cloudfront.net/_source/cupid-dolphin-the-graphic-5th-november-1881.png

The original must date from before 79AD, the year that the city was buried under the ash from the eruption of Vesuvius.

The American Architect & Architecture magazine (Volume 9, 1881) described the bronze figure: ‘Four bronze statuettes, which have recently been found at Pompeii, are now to be seen in Naples. One is a magnificent work about two feet high, representing a cupid holding a dolphin on his right shoulder…’

Giving an overview of the few previous years' results from the excavations at Pompeii, the ‘Marin Journal’, of the 18th January 1883, referenced the original of this discussion's bronze, the relevant extract from which is here:
https://d3d00swyhr67nd.cloudfront.net/_source/cupid-dolphin-marin-journal-18th-january-1883.png

Thus, this statuette is likely to have been fabricated in Naples, from a cast from the original bronze, sometime between 1881, the year of the original's discovery, and 1898, the year that it was purchased in Naples. With a contact to the right antique art experts in Naples, it probably would not be too difficult to discover which late-19th century foundry in Naples was producing these copies.

The main foundry in Naples producing bronze copies like these was that of Gennaro Chiurazzi.. It is likely that is quite an amount published on his work and on that of his contemporaries, as well as in much more recent publications as this sort of bronze frequently appears in auction rooms and elsewhere on the art market

A short history of the foundry can be found on the website of The Ringling Museum docents
ringlingdocents.org/chiurazzi-history.htm which leads you to the scholars Paula Freitag and Dr Carmela Iaccarino
and to http://www.chiurazzi.com/index2ing,html
The Getty acquired copies of all the surviving casts and probably can answer many questions on these bronzes

I would tend to agree with Martin Hopkinson and all his points above. Though another possibility was the Sabatino De Angelis & Fils foundry, Naples, also active at the time mentioned. From what I can see, they used a small oval plaque with their name on which is situated on the sand cast base. The photographs shown do not seem to indicate a small plaque. So Gennaro Chiurazzi is probably the best contender.

The most important issue is that the Art UK listing indicate that this is after a Roman original from Pompeii. I had already submitted a proposal to that effect two months ago. This piece is after a bronze fountain ornament found in the House of the Large Fountain. The original is no doubt in the Museo Nazionale in Naples (where this copy was purchased), and a copy has been placed at the original site (which can be seen in multiple photos at the link below by scrolling down):

If you copy and paste into your browser, the link will work.

I had also notified Art UK to the effect that the same collection has a copy of a comparable bronze fountain ornament, Cupid and Goose, found in Pompeii in the House of the Small Fountain:

The original is in the Museo Nazionale in Naples (where the copy was purchased); the copy is bound to be from the same foundry as the Cupid and Dolphin. See link below:

What is in the central roundel at the base between Cupid's feet?

The Getty has not yet part this part of its collection on line - nor has the British Museum and Victoria and Albert Museum , as far ad I can see

I do not have access to the sculpture images taken for Art UK and was unable to read the tiny label from the photographs provided for Art UK.

I would like to thank the Assistant Collections Officer at Clifton Park Museum for photographing this sculpture with her mobile phone. The image is attached and her reply is copied here:

I have looked at our records and it says this figure was purchased from ‘Sabatinus de Angelis et Fils’.

The Art Detective thread also mentions our Cupid and Goose which also has a plaque with the same wording. Michael Hurman seems to have correctly identified the foundry on the thread.

Let me know if I can help with anything else.'

The word after "Fonderia" is bound to be "Artistica." The Chiurazzi firm was also known as "Fonderia Artistica Chiurazzi."

The year of birth for Sabatino de Angelis given online is 1838. A book by Carol Mattusch (link below) states that a number of foundries opened in Naples immediately after its Muzeo Nationale became a public institution in 1860 and began to dispense permits to mold and copy antiquities in the collection. Thus, I expect our foundry did not begin operations before the 1860s.

Sorry; here is the link I mentioned in my last comment:

There is a catalogue in the Royal Collection:
https://www.rct.uk/collection/1044844/catalogue-illustre-de-sab-de-angelis-fils-naples

Page 51 of the illustrated sales catalogue for the French edition of the Sabatino de Angelis & Fils foundry clearly illustrates this discussion's bronze, as does page 50 for the Cupid and goose. In this case the piece is entitled "Amour avec dauphin pour fontaine" ("Cupid with dolphin for a fountain") and is recorded as having been found at Pompeii in November 1880.

This catalogue might be worth bookmarking for other bronzes that appear in UK and Irish collections at the end of the 19th century.

The catalogue details the reference number of the original in the Naples Museum, after which these casts were made. It also gives the dimensions of the original and the choice of modern cast sizes and thee finishes that can be ordered, each at a different price.

In conclusion, I would suggest that the title be retained as is, as Cupid with Dolphin", and the artist line states that the work is copy of a bronze from Pompeii as cast by the foundry of Sabatino de Angelis & Fils of Naples.

The above-referenced catalogue also states that the Sabatino de Angelis foundry was established in 1840, so the sons of the founder (the Fils in the names) must have continued the business beyond his death and up to and after 1900.

The above should reference one son, rather than sons.

Also, other works from the Sabatino de Angelis & Fils foundry can be seen here on ArtUK, though, frustratingly, only two are illustrated (which seems to be a regular occurrence with sculptural works on the site).

A different version of the foundry's catalogue, set out as an un-illustrated price list, can be seen here:

Obviously, both the Art UK entry for Cupid with Dolphin and the one for Cupid and Goose (same collection) should be amended.

Since these bronzes were fairly exact copies of Pompeiian originals, I should think identifying them as such will make them of greater interest to those who visit the collection.

In addition to the two Cupid figures already under discussion, purchased in Naples in 1898, the same collection has 4 other bronzes also purchased in Naples in 1898. All 4 appear in the French catalogue for the de Angelis firm linked above by Kieran, and two of them show (in the Art UK photos) an oval manufacturer’s stamp on the base which is bound to be the same one present on the Cupid figures. I fully expect all 4 were made in and purchased from the same foundry. They are as follows:

“Silenus” (identified as Dionysos/Plato in page 2 of catalogue and other sources; original found in Herculanum in 1759):

“The Angler” (page 47 of catalogue; found in Pompeii; the Clifton Park specimen is missing a basket in figure’s left hand and a fishing rod in the right hand):

“Alexander on Horseback” (page 57 of catalogue; found in 1745 in Herculanum; stamp on base behind horse’s right hindfoot, Art UK images 1-2):

According to the source linked below, the identity of the bust remains unclear, and it may be either Plato (which I would favor) or Dionysos, though I suppose a case could be made for an unusually dignified depiction of Silenus:

Description
A figure of a nude boy carrying a dolphin over his right shoulder.