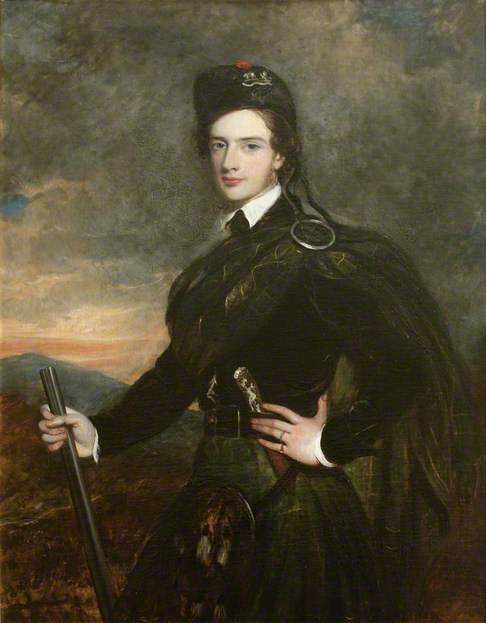 The outfit depicted is typical early-Victorian Highland dress, c.1850, so the portrait cannot possibly depict Lord Gardenstone, 5th of Troup. He appears to have died without issue. If this shows Lord Gardenstone then it must be a later one.

http://www.kittybrewster.com/ancestry/garden1.htm it would appear that there is only one candidate, Francis William Garden, 9th of Troup (1840–1895).

'The information we have is that this is the 5th Lord Troup. I am interested in your comments on the representation of the plaid which is very useful to date a painting. The painting is attributed to "circle of" Tilly Kettle and I have been trying to compare the portrait with known work by Kettle. However, other portraits by other artists including:

shows a romantic figure within a romantic landscape and wearing a belted plaid. The age of Lord Troup (if it is he) appears to be no older than 30 which puts the painting at around 1750.

There appears to be a variety of ways of wearing the kilt and plaid, here shown with what appears to be a black velvet doublet in a shorter version of the longer jacket worn by Bonnie Prince Charlie.

There are also Garden of Troup records held by Aberdeen City and Aberdeenshire archives, one of which is a family tree, which might suggest other Lord Troups as candidates. I think this is worthy of greater discussion.'

It's certainly a 19C picture. Nothing to do with Tilly Kettle.

I agree with Peter that this portrait cannot possibly be of the 5th Lord Troup, nor does it date from the period that Tilly Kettle was active as a portraitist. To me, it appears closer in style to portraits of the 1830s and 1840s, possibly by someone in the circle of Sir Francis Grant PRA (1803-1878). If the identification that the sitter is one of the Lords of Troup is to be believed, then Francis Garden-Campbell, 8th Lord of Troup (1818-1848) seems the more likely candidate. He married in July 1839 at the age of 21, which looks about the right date for this portrait.

Tilly Kettle (1735-1786) had been dead for some 60 years when this was painted in the mid C19th. The cap badges on the sitter's bonnet are unclear, but look to be possibly an Elephant and a Rampant Lion. If so, the former might the badge of the 78th Regiment of Foot (sometimes called the Ross-shire buffs) and the Rampant Lion, especially if on a saltire, has many Highland regiment connections. Attached is a portrait of the early 1840's of an officer in uniform with a similar badge (bottom left). But the sitter in this SNT portrait is not apparently in uniform, so the badges could glance back at earlier service. Could we have a higher resolution image please ?

Christopher's comment makes sense. If one is to determine what the details of the uniform mean, then a higher resolution jpeg will be needed. If the collection agrees to this request it would be a great help. Any information on the back of the painting might also yield a clue. As Scott notes, the style and type of sitter is characteristic of Francis Grant's work.

The double barrel musket was first introduced in Scotland for deerstalking, in the 1830s, and as an exclusively sporting gun, as opposed to a military weapon. The first double barrel shotgun was invented in 1875. Depending on what the gun the subject in this painting is deemed to be holding in his right hand, the work must have been executed after either the 1830s or 1875. An expert gunsmith or dealer might be able to identify the age and make of the gun from the distinctive sight (if such be it) which can be see just above the subject's right-hand fingers, as enlarged on the attached image.

Also, the elaborately carved classical antler-handle knife, showing a stag being pursued by a dog, possibly in ivory inlay, might also help to date the painting.

And finally, are the young man's left-hand finger rings of any significance?

Rather than being a portrait with military connections, this painting's subject looks more like a young man with big-game highland sports on his mind.

Just to clear up a couple of misconceptions. There has never been an inheritable peerage of Gardenstone - Lord Gardenstone (or -stoun) was the nominal title conferred on Francis Garden on his judicial appointment as a Lord of Session in 1764, and ceased to exist on his death in 1793. There has also never been a peerage of 'Lord Troup', only the Lairdship of that Ilk - essentially something that goes with ownership of the property. In times past it therefore usually passed down as if it *were* a title, but it's not - when the property is bought or sold, the Lairdship goes with it...a bit like the archaic English title Lord of the Manor, in fact. The medieval form 'Lord of Troup' is sometimes still found, but is generally discouraged as both misleading and anachronistic. And 'Lord Troup' is, and always has been quite wrong.

[Sorry, Kieran, this was written before I read your last, and overlaps slightly.]
As others have said, this portrait is far too late for Lord Gardenstone. It is not, I think, a military portrait - that's a sporting gun, not a weapon of war - and I'm fairly sure I've identified the two 'badges' on the sitter's proto-Glengarry cap. Though we will need a higher-res to be sure, I believe they are the two crests of the Campbell-Garden family - 'a boar passant argent' (for Garden of Troup) and 'a demi-lion rampant, holding in its dexter paw a heart royally crowned' (for Campbell of Glenlyon, though the last detail is all but invisible). For those not up on heraldry, the arms with both crests are fortuitously shown on Plate 114 of Burke's 'Heraldic Illustrations' of 1846: http://bit.ly/2Fjz0Ga . I am also attaching a composite of the pair of crests from both book and bonnet (tweaked) - the latter very small, unfortunately.

It's also possible that at higher-res the scroll beneath the crests may reveal one or other of the two family mottoes. I think, too, that the tartan shown may (if the blue has faded) be intended for that of Campbell, though the pale check over it suggests the (unauthorized) one for Campbell of Argyll, technically not the right family - the Glenlyon Campbells descended from the Campbells of Glenorchy, only distant kinsmen of the Dukes of Argyll. Or it may be C. of Breadalbane, who were slightly (but not much) closer relations.

There is disagreement about whether it was Peter Garden of Dalgety (through whose wife, Katherine Balneaves, Glenlyon was inherited) or his son Francis, 6th of Troup, who changed the name and arms to Garden-Campbell. It's more likely to have been Francis, as it was he, not his father Peter who actually inherited Glenlyon - the last Campbell laird, Dr David Campbell, did not die until 1806, when Peter had been dead for 21 years. In any case it doesn't matter for our purposes - by the time this portrait was painted the family name and arms were Garden-Campbell, and continued so until 1885 when Francis, 9th of Troup, sold the estate and lairdship to Sir Donald Currie. See 'The Lairds of Glenlyon' (1886) http://bit.ly/2EW0Vy4 and also http://bit.ly/2C9iUA4 .

Finally, I tend to agree with Scott that this is much more likely to be the c.21 year-old Francis Garden-Campbell, 8th of Troup (born 1818) than his son the 9th Laird born in 1840 (and who sold Glenlyon and reverted to plain 'Garden'). To me it has very much the feel of a portrait of c.1840, not one of c.1860. Like Kieran, I note that the sitter apparently has a ring on the third finger of his left hand - whether or not this held the same betrothal/marital significance for a Scottish man of the early/mid C19th as it certainly did for a English woman at the same period I do not know.

This is definitely civilian, not military dress. The change from full tartan outfits, including the coats, to black coats started c1830-35 during the reign of William IV. The attached portrait of John Ramsay c1840 shows a similar style coat.

Peter, that's a most useful image for period comparison - and note that the outfit of John Ramsay L'Amy also displays his family crest, though on the leather flap at the top of his sporran - a wrist and hand clasping a crozier ( http://bit.ly/2EXT9no #4). I think it likely that these crests were made of pressed sheet-metal (silver or silvered brass), back-filled with lead to hold fixing pins - see http://bit.ly/2ocYqxN . I own identical C19th armorial ones that were uses as decorative fittings on leather horse harness.

PS I see you are a tartan expert - apologies for my rather inexpert musings on Campbell ones above.

Osmund, yes, you're right about the sporran construction. It was common practice during the mid-19th century.

It's quite likely that the tartan is meant to be but the execution is far to poor to be certain unlike other portraits such as the one of Ramsay.

This discussion, “Which Lord Troup is this? Can it be dated from the sitter's plaid?”, ranges across four different Groups and has attracted 14 comments, dating to just 20 and 21 February 2018. It concerns a portrait at Drum Castle (NT for Scotland). To take the questions posed in the discussion in reverse order:

Can the portrait be dated from the sitter's plaid? There is general agreement in the discussion that the portrait, in costume and in style, dates to about 1850 as Peter proposes, and perhaps to the 1840s although it could be a little earlier or later. So clearly the portrait cannot belong to the circle of Tilly Kettle, who died in 1786. It is closer to the work of Sir Francis Grant, as proposed by Scott, but it is not, I think, from his hand.

Which Lord Troup is this? As has been pointed out in the discussion, the designation “Lord Troup” is misleading. Rather, the phrase “Lord of Troup” could be used but the discussion suggests that it is anachronistic. It was not a peerage title but associated with land ownership. The crests shown in the portrait can be associated with the Garden-Campbell family, according to Osmund’s research, which is important confirmation that we are exploring the right area. Of the various members of the family, the possible 1840s date for the portrait would fit best with Francis Garden-Campbell, 8th of Troup, as suggested by Scott and Osmund. He married in 1839 and the portrait may possibly have been painted shortly thereafter.

Subject to the agreement of the other three Group Leaders and of the NT for Scotland, I propose that this discussion, dating back to two days in 2018, should shortly be closed unless further evidence can be produced. The recommendations could be as follows: