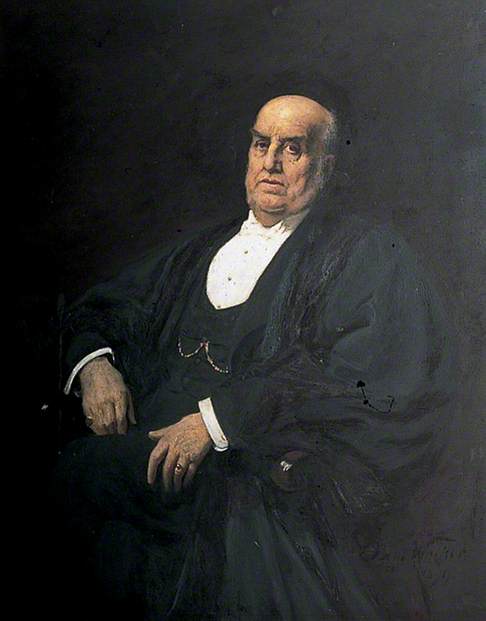 The attached newspaper article from the Whitstable Times and Herne Bay Herald dated 28/10/1899 suggests that the artist may be 'Mr Walker'.

The painting is dated c.1899 by the collection: a faint inscription on the lower right corner appears to say '... Walker' and '189...', but is mainly unclear.

Would anyone be able to suggest the identity of the artist, or a firm execution date?

There's an aticle here which mentions Edward Bent Walker as having painted a mayor of Faversham:
http://www.brushwork.co.uk/ebw.htm

This might be resolved if we could see an enlarged copy of the artists signature.

I’d stupidly missed the signature; and although a better image would help, it becomes very slightly clearer with tweaking. I think it does read “E Bent Walker”, with “1899” below. The ‘E’ is of the Ɛ style, and the tails of the '99' drop below the line of the '18'. There also seems to be a number – 23 or 25 – below the ‘Bent’. Image attached.

For want of anyone else, I had been thinking of John Hanson Walker, too, until I saw Oliver's webpage find. That must change the position radically. The same website has some mainly poor images of other works by Edward Bent Walker, including a few portraits, and his style is variable (or developed markedly). His signature is also highly variable, and the only really clear one (on the 1904 portrait of Ebenezer Prout now at the Royal College of Music) is quite different to ours. The Prout portrait (see http://www.bbc.co.uk/arts/yourpaintings/paintings/ebenezer-prout-18351909) is really rather good – Walker apparently believed it was his finest; but the other one next to it (also oddly identified as Prout, though most certainly not) is a far duller affair. If the latter really is by him, I'd say our one of Alderman Anderson lies somewhere between the two in inspiration – perhaps he felt constrained by the sitter’s desire for an absence of colour. But I suppose we can say it is not wholly inconsistent; and as Walker was working in the south of England at the time, I think it’s reasonable to assume that the Wigan Examiner story is correct, and that (in conjunction with the inscription) this is indeed a work by him dating from 1899.

Edward Bent Walker is a somewhat elusive figure, not least because the R.A. (Graves 1905) has him listed as Edwin, as does the Witt Library checklist. Edward, however, would seem to be correct. He’s not mentioned at all in Stewart & Cutten (1997), but he exhibited a bit between 1891 & 1916, first from Stockport, then from Bushey, and also later from London. I have found a 1917 obituary (or personal appreciation) of him by his close friend the socialist writer, campaigner and publisher, Robert Blatchford, that gives a flavour of the man: I attach it below. This and the newspaper piece help fill out the genealogical record.

Walker was born in Wigan early in 1860, and died at Stockport (near Manchester) in March 1917. In the 1881 Census, still living with his grocer father, he is recorded as a designer. But by 1891 he had married and moved from Wigan to Stockport, and describes himself as an art teacher. Interestingly, his next-door neighbour then and for the next couple of years was the exceptionally talented young painter Thomas Edwin (Tom) Mostyn; and when in 1893 Mostyn went off to study under von Herkomer at Bushey, Walker went too – perhaps the moment both artists really developed their passion for colour. At the turn of the century Walker and family moved south to Croydon (though the R.A. gives an address in Notting Hill); but he seems to have remained attached to Stockport throughout, visiting friends there at the time of both 1901 & 1911 Censuses (his wife and many children being left behind!).

Blatchford relates that Walker was a good man and a socialist, quiet and not given to self-promotion, and a magnet for bad luck. As a result he seems to have left few traces of his existence - no will, and no newspaper mentions that I can find apart from Oliver’s one in the Wigan Examiner. A few paintings have surfaced on the market, mainly indifferent landscapes - but as the obituary mentions, many of his paintings were destroyed in a fire.

It seems this discussion has been satisfactorily resolved and can be closed. The artist is Edward Bent Walker (1860-1917) whose life can be tracked in the various links above. As the portrait was presented in 1899, it seems likely it would have been painted at that time. In 1899, Walker was at Bushey in Hertfordshire, still associated with Herkomer's school. The Faversham Town Council can now give the correct artist's name and date to this painting.

I agree the discussion thread can now be closed.