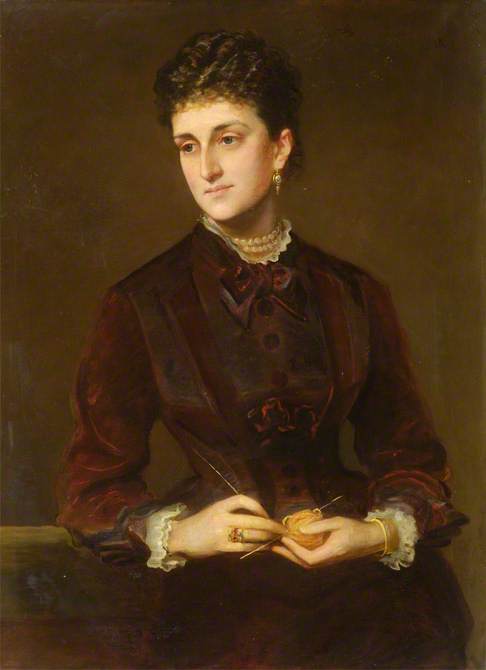 The Collection have stated: 'Unfortunately, we do not have any detailed information on the identification of the artist although the artwork is signed with the initials 'HW’ and dated 1876 [below sitter’s left elbow, to our right]. If you come across any other useful information related to 'HW' in your research, we would be a grateful recipient.'

This discussion is now closed. The artist was identified as Henry Weigall Jr (1829–1925). 'Lady Gordon Cathcart' has been retained as the most useful title. The acquisition details have been amended to 'presented by Mrs E. Morrice, 1944'.

I'd say the artist is Henry Weigall. Some might say Henry Wells but Wells is a better artist than this. The sitter was Emily Gordon at this point. Her husband Captain John Gordon died in 1878. In 1880 she remarries Sir Reginald Archibald Edward Cathcart so at that point she becomes Emily, Lady Cathcart. Or stretching it, Emily, Lady Gordon Cathcart. Not very popular in Scotland!

well recognised! He is Henry junior.

Here is Henry Weigall junior's monogram from his portrait of the Duchess of Teck in the Royal Collection (for further proof, which Art Detective always likes).

His monogram is also on other works on Art UK: https://artuk.org/discover/artists/weigall-henry-18291925

It’s also possible that there may be a spelling mistake in the name of the Donor of the painting.

“A portrait in oils of the late Lady Gordon Cathcart of Cluny Castle from Mrs E. Morrice, Hitchin.”

Very well done, Barbara (and it's good to see you here again).

I will nitpick, though, about Emily's correct nomenclature - at least as far as she was known at the time in social contexts (legal usages needing full names were and are different). From her first marriage in 1865 (19 Dec) until her second in 1880 (5 Dec), she is usually (and correctly) found as 'Mrs Gordon of Cluny'. After that she would normally have become just 'Lady Cathcart'; but in fact newspaper archives show that she immediately became known as 'Lady Gordon Cathcart', presumably at her own instigation, and that about three years later her new husband Sir Reginald Cathcart, Bar[one]t, also took to using the surname 'Gordon Cathcart' to reflect his wife's huge inheritance; but her first name 'Emily' is almost never mentioned.

The Victorians and Edwardians studiously avoided using the given names of ladies unless they were Royals or the daughters of Earls & higher peers; the correct 'Lady [1st name] [surname]' usage for the latter carries over on marriage - for example, Lady Rose Fane, daughter of the Earl of Westmoreland, became Lady Rose Weigall on marrying our artist Mr Henry Weigall. But this was not Emily's situation - for her even the form 'Emily, Lady Gordon Cathcart' is technically incorrect, though these days it is widely and I think sensibly used: in her day it would specifically imply either (a) that she was the divorced ex-wife of Sir Reginald, or (b) that she was his widow, and the succeding baronet was married). Neither of these was ever true.

I go into such detail only because it affects what one should be searching for in contemporary records. And indeed two other portraits of Emily as 'Mrs Gordon of Cluny' were exhibited at the RA - a full-length oil by Louis William Desanges in 1868, and a watercolour by Edward Clifford in 1876. Our work, however, does not seem to have been exhibited anywhere.

Henry Weigall Junr (his father was a medallist, gem-engraver and later sculptor) was an exceptionally well-connected artist, and this was cemented by his 1866 marriage in Westminster Abbey to Lady Rose Fane (see the post above). Her great uncle was the Duke of Wellington, who had sat for a bust (one of several) to HW Senr in 1848-9, and for a portrait in oils to HW junr in 1851 (both exhibited RA). Despite his limitations as an artist, he found great favour with the top end of high society - his numerous sitters included the Prince & Princess of Wales and many other members of the Royal Family, as well as at least three Prime Ministers, Gladstone, Disraeli and Salisbury.

His sitter's book 1849-1883 is held by Kent Archives ( https://bit.ly/3uuK24b ). A copy is said to be at the NPG/Heinz Archive, though I can't confirm that as their online catalogue is down at the moment...not that it would make much difference, as they showed no inclination to re-open on even a limited basis last summer when they surely could have done, and the lack of any news on the subject suggests they have little interest in doing so any time soon. With the National Art Library's similar lack of enthusiasm for public access even where feasible, it's been a bleak time for art historical research. I fear the future may be bleaker still, Covid or no Covid...

Hello Osmund. I can do nothing but bow to your knowledge on titling in the 19th century. It does bug me the way the media nowadays often uses Lady with a first name for anyone married to a knight when it should only be used for daughters of earls, etc.

Thanks to Barbara Bryant for the immediate identification of the artist as Henry Weigall Junr (1829-1925) and to Osmund and others for further clarifications. It is also accepted that 'Lady Gordon Cathcart' seems to be the most useful title, as the name used in her lifetime, and especially as her husband took the surname Gordon Cathcart.

Do we keep this discussion open until Weigall's sitter book can be consulted? Or close it on the basis that Barbara has answered the question set for discussion, as Andrew has indicated in the post prior to this one?

This discussion, by the way, led to the behind-the-scenes identification of another Weigall portrait signed with the same monogram at Hereford Museum and Art Gallery:

That rather depends, Jacob, on whether or not the Heinz re-opens any time soon**. Kent Archives seem to be providing limited access, as they and many others did when they could last year...but I don't think I'll be making a pilgrimage to Maidstone. In truth it's not really necessary, as the attribution seems certain.

**Re the Heinz, I wonder, do you have - or could you get - any sort of 'insider' information from the NPG on what their intentions are? The bald statement on the website that the archive & library is closed due to Covid has not, I think, changed one iota since early last year; and attempts by me to find out more have got nowhere - most recently by email in mid-May, which elicited an insultingly unhelpful response. I'm beginning to think they are quite content to the let the closure drag on for as long as possible under the guise of pandemic safety...and then at some stage there will be a regretful announcement that staff re-assignments will make it impossible for the library to re-open before the main gallery does in 2023 - or even that this vital resource will be staying closed indefinitely for budgetary reasons.

On this discussion, since it is accepted that the attribution is certain, I'll recommend closure in a week's time unless there are further pertinent contributions.

On the Heinz I have no reason to think that closure will be deliberately extended. Indeed I look forward to its reopening. But I don't have the sort of 'insider' information you imagine.

This discussion, "Who can identify the artist 'HW' of this portrait of Lady Cathcart?", has attracted 13 responses.

As Andrew Greg says (8 May), "Thanks to Barbara Bryant for the immediate identification of the artist as Henry Weigall Junr (1829-1925) and to Osmund and others for further clarifications. It is also accepted that 'Lady Gordon Cathcart' seems to be the most useful title, as the name used in her lifetime, and especially as her husband took the surname Gordon Cathcart."

I recommend that this discussion be closed on this basis, subject to input from the collection and Michelle as Scottish group leader.

Our sincere thanks to all the contributors on this art detective channel for not only identifying the artist of this portrait but also providing us further information on both artist as well as the sitter of this painting.

So, our thanks goes to Barbara Bryant for her identification of the artist as Henry Weigall. We are very grateful to your knowledge and expertise in finding such a compelling evidence. We would also like to express our thank to S. Elin Jones and Osmund Bullock for fascinating details and deep understanding of the subject matter. Thank you so much to Martin Hopkinson, Andrew Shore, Andrew Greg, Jacob Simon and Jacinto Regalado for confirmation and relevant information on this painting.

Art lives upon discussion, Henry James said, and we are very grateful for your generosity, time and expertise of all the contributors in this post and thanks to ArtUK team for opening the discussion. It really enhances our knowledge and understanding our collection.

All the information from this discussion has been added to our record for future references.

Michelle Foot, Group Leader, Scotland: Artists and Subjects, email, 30/06/21:
'I am happy to close this discussion. Many thanks to everyone involved for their input, including advice on the sitter's title, and special thanks to Barbara Bryant for identifying Henry Weigall Jr.'s monogram.'