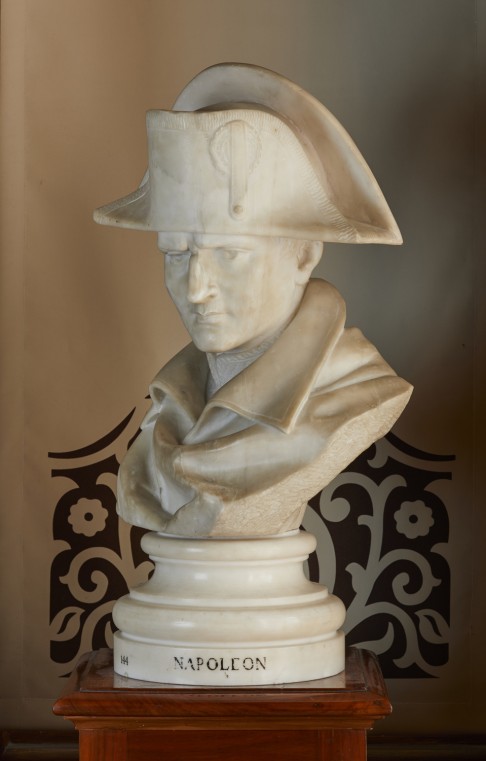 We are presuming that this is a copy of another sculpture but does anyone know which one?

‘There are a number of more or less similar busts, but the closest (albeit not exact) match is with one of which a version is held at the Villa dei Mulini on Elba, one of Napoleon's residences on the island during his exile there. The Elba bust may be a copy (others exist), and it is said to be attributed to François Rude (1784–1855) according to the Italian Wikipedia entry for the Villa (or Palazzina) dei Mulini, now a museum (link below; scroll down to the section titled Primo piano, which mentions the bust and has an image of it, which will enlarge if you click on it):

It is very close to the Russell-Cotes bust, but the lapel on the viewer's right is not the same, as it is raised or turned up, not as flat or turned down as in the Russell-Cotes example. I have not seen a version clearly assigned to Rude, unless the Elba bust is the original, but I do not know the basis of that attribution. I hope that helps’

The sculptor is most likely French or possibly Italian. Does the collection know where Sir Merton acquired the bust or any other relevant provenance information?

Also, one assumes there is no signature or date. Is that correct?

Apologies for the delay in responding but, no, we have no idea as to where or when Sir Merton acquired this bust. Sir Merton's papers did not come to us when we were established as a public museum in 1922 and according to family legend were destroyed by the widow of his son in the 1930s. The only times we are sure of the provenance of an item is because of evidence on the artwork itself, a mention in Sir Merton's (slightly unreliable) autobiography or outside third party info. I have been able to successfully track what Sir Merton owned and decided to sell but I cannot really get to grips with his purchases.

As far as I know there are no signatures on the sculpture. If there were any we would have added them to our records and the Art UK sculpture survey at the time but I will double check when I am next in the museum.

Just to confirm: there are no signatures or inscriptions on the reverse of this sculpture.

The strongest market in the 19th century for busts of Napoleon was clearly France, for obvious reasons, and the demand no doubt produced many such busts of varying quality and originality. Popular versions were bound to be copied or adapted with minor variations. I doubt it will be possible to attribute this example to a specific sculptor with certainty, but it can reasonably be attributed to French School.

A note could be added to the Art UK entry to the effect that a very similar bust in Napoleon's former residence in Elba has been attributed to the noted Romantic sculptor François Rude (1784-1855), though that attribution may or may not be sound. Rude was a partisan of Napoleon and made a rather unusual statue of him (1845-1847), "Napoleon Awakening to Immortality," below: