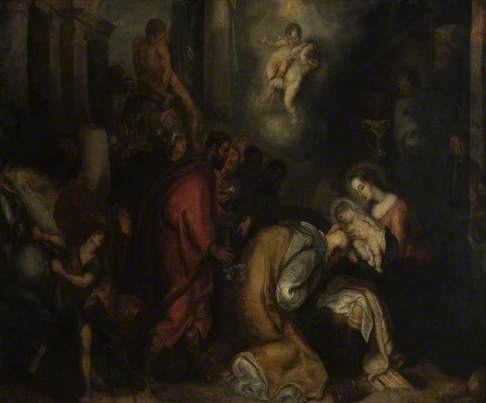 We've never really known much about this painting. Now that we've put it on display this has become a more pressing matter. It was accessioned in 1929 as by Valdes Leal, but that is in doubt. We have no other paintings from Spain in our collection, so we're in the dark! Does anyone have any suggestions?

Its provenance is interesting. It was donated by a descendant of General William Thomas Dilkes, who seems to have bought it in Spain, around 1811, while fighting in the Napoleonic Wars.

Unfortunately there are no useful clues on the back of the work. We’re assuming that it doesn’t have the usual old exhibition labels and auctioneers’ reference numbers because it was with the same family from around 1811 to 1929, and here from then on (but largely ignored and seldom displayed). It’s quite a mystery. Despite some of the figures clearly being out of scale, we think it’s a pretty decent painting. Definitely one that we’d like to know more about, so we’re hoping that people with solid expertise in Spanish painting will spot it and be able to contribute.

This discussion is now closed. ‘The Adoration of the Magi’ was accessioned as a work after Juan de Valdés Leal (1622–1690), an attribution that was later amended to Spanish School. It can now be considered as after the studio of Simon de Vos (1603–1676).

Thank you to everyone who contributed to this discussion. To anyone viewing it for the first time, please see below for all the comments that led to this conclusion.

A very similar work with the same title that was in a 2016 auction is on the Christie’s website. I have attached a composite.

I would say this was certainly not Spanish and is more Flemish in feel. Circle of Van Dyck.

The new image has filtered its way through to the Art UK page now. Still waiting for Art Detective area change.

The date would be after 1640, as noted in the Christie's essay.

I have found the specialist on Juan de Valdes Leal: https://second.wiki/wiki/enrique_valdivieso

It would of course be desirable to get Valdivieso's opinion, but it seems quite unlikely that this is by Valdés Leal.

Brilliant of Marcie at the outset of this discussion in identifying the Simon de Vos sharing much of the composition of our work.

Perhaps our smaller version on copper was made for export purposes and wound up in Spain.

Xavier Bray who is now Director of the Wallace Collection and worked at Dulwich and the National Gallery, attributed this to the Seville School when approached by Dr Susan Steer who catalogued it for the National Inventory of European Paintings. Seville was Juan de Valdés Leal's city. There were of course extremely close connections beween Spanish Art and that of the Spanish Netherlands.

If this painting was bought in Spain in the early 19th c. then it could conceivably be a Spanish version of the de Vos, a copy of a larger version of the de Vos or of an engraving of either. As far as one can tell, the paint handling of this looks coarser than de Vos's, but the difference in scale confuses the issue. Is it more Spanish?

I agree with Andrew that ours is less finely painted, especially evident in Mary's face, which suggests a copy or a studio work. It could be listed as after or studio of Simon de Vos.

It seems a little odd that the large version (if a prime one) only includes two thirds of what is in the small one. It is usually 'copies' that get bits cropped off, rather than added as seems implicit in the suggestion that the small one is secondary.

The 'addition' on the small one, however, does seem rather awkward and not something compositionally 'missing' in the balance of the large one: so perhaps that's what it is, for whatever reason. The awkwardness is most apparent lower left, where not only does the (viewer) right foot of the dynamic groom figure holding the horse overlap the red-dressed 'king's' right ankle but it also does so on a stone 'ledge' inserted to compensate for the groom not placed low enough to stand on the same ground level.

Though the dress is different, the groom figure also looks as if it might be based on that of Bacchus in Titian's 'Bacchus and Ariadne' (National Gallery), though in mirror image, so I wonder how one might account for that: common sources?

It is possible, of course, that the Christie's version was cut down.

There are less than a handful of pictures by Simon de Vos in UK public collections, so this could be a significant find.

My point in the previous comment was that, comparing the two compositions, the Christie version does not look cut down: it is ours in which the extra 'strip' at left looks unnecessary to the main subject. Apart from the overlapping feet, the half-column (or whatever it is) sticking up there looks odd.

As Pieter says, the 'addition' on the left of the composition is awkward. I think our painting, of very mixed quality, was put together from sources emanating from the studios of Flemish painters. The horse at the left is reminiscent of the work of Rubens, e.g. his St George and the Dragon painting and a drawing in the BM.

The painting may have a Spanish provenance but may not be by a Spanish artist. It seems to me to lack Juan de Valdés Leal's lively touch.

There is also an extra strip at right of ‘our’ painting - perhaps added to balance the addition on the left.

I cannot help thinking that the supposed Spanish connection has led us on a false trail. The provenance given on NICE paintings, with two question marks, is as follows: 'Acquired by General Dilkes, in Vigo, Spain, 1811(?); by descent(?) to Miss A. E. Dilkes.' Could it be possible that Miss Dilkes, who inherited the painting and in 1929 bequeathed it to the collection, simply assumed (without firm knowledge) that the work had been acquired by her ancestor General William Thomas Dilkes while serving in Spain in 1810-11, during the Peninsular War. Or perhaps the curators in 1929 understandably made that assumption.

Our work is executed on copper, which perhaps enhances the probability that it was painted on Northern Europe rather than Spain. The support could, of course, be an engraving plate.

Just reverting to possible Titian influence from the 'Bacchus and Ariadne' on the 'groom' figure - which is also at much smaller scale than the adjacent 'king'.

That was for the Duke of Ferrara (i.e. the d'Este family),started in Venice in 1522 and completed in Ferrara in 1523. It went to Rome in 1598 and came to London in 1806/7, in private hands until bought from the jeweller-cum-showman Thomas Hamlet (1793-1849) for the National Gallery, I think at his bankruptcy in 1841. (The NG also has several other old masters that were his and he had also owned the Aldobrandini 'tazze', though sold them in 1834.)

I suppose its long Rome sojurn in particular provided opportunities for other artists to see it.

Having now looked through my copy of Enrique Valdivieso’s catalogue raisonne of Juan de Valdes Leal I can state that Bath’s painting is definitely not a copy ‘after’ Valdes Leal nor would it appear to be a copy after Simon de Vos from Valdes Leal’s studio. The face of the Virgin is too porcelain doll-like to have come from Valdes Leal’s studio; the cherubs’ bodies lack his corporeality and the paint surface lacks his ‘streakiness’.
One of Simon de Vos’s major commissions (1635-44) was a series of 12 large canvases for Seville Cathedral, 6 of which still remain in the chapel of St Anthony, but they all illustrate scenes from the Old Testament book of Genesis, so they can’t provide the basis for Bath’s copy. According to Simon de Vos’s biography though his later post 1640 works were larger in format he used compositional formulae of his small cabinet paintings, which therefore appear to lack balance. There is another Simon de Vos Adoration of the Magi variant on copper in the National Museum Warsaw, and closer in size (58 x 71.5cm) to the Bath painting https://commons.wikimedia.org/wiki/File:Simon_de_Vos_-_Adoration_of_the_Magi_-_M.Ob.572_-_National_Museum_in_Warsaw.jpg

I’m not sure that the copy could be Seville School, especially not if it really was bought in in 1811 in Vigo, on the north-west tip of Spain. Though a part of the British army was in Seville between 1810 and 1812, before they were pushed out by the French troops. Of course, as Vigo was a major port it could easily have seen the import of paintings from Flanders, especially Antwerp where Simon de Vos’s studio was based. Antwerp’s painting workshops and art dealers exported many works to Spain in the 16th and 17th centuries. So I think so far the best suggestion would be to classify the Bath painting as after Simon de Vos studio.

My first thought was Flemish, circle of van Dyck, which has been suggested by Toby Campbell.
I then looked up some paintings by Juan de Valdes Leal. I see so many similarities that I am satisfied, at this point in time, that this attribution is the correct one.

As Collections Manager of the gallery that owns this work, I wanted to take the opportunity to say how delighted I am to see so many thoughtful and interesting suggestions about it. Many thanks to all of you for taking the time to help us find out more and understand this work.

I had no idea about the Simon de Vos version - quite a revelation!

Thanks to Xanthe for her knowledgeable assessment and her proposed attribution seems a fair distillation.

As a matter of interest, one of de Vos's Seville paintings was sold a few years ago https://www.dorotheum.com/en/l/5137232/ with a summary of his work for the Cathedral. They acknowledged as expert on de Vos was Hans Vlieghe, who is or was "professor of art history at the Katholieke Universiteit Leuven (Louvain) and research director of the Belgian Nationaal Fonds voor Wetenschappelijk Onderzoek at the Rubenianum, Antwerp. He is a member of the editorial board of the Corpus Rubenianum." (Yale UP)

I had been searching for a painting that included the horse and camel from the Art UK work and now I can stop searching - I think they are both depicted in the work at Andrew’s link (“The Earthly Paradise with the Fall of Adam and Eve” by Simon de Vos). I have attached an extract.

I would like to recommend that the painting of 'The Adoration of the Magi' from the collection of Bath's Victoria Art Gallery, be considered as after the studio of Simon de Vos, and thank Marcie Doran for first identifying (1/10/2021) the compositional format association with a painting from Simon de Vos’s studio.

Title
The Adoration of the Magi