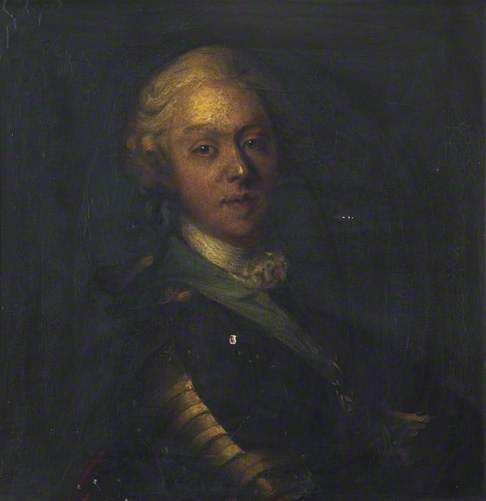 I have been collecting Jacobite medallions and prints since 1951 and of all the portraits of Prince Charles after Louis Tocqué that I have seen I have to say this is by far the best which makes me wonder could this be the lost original that was done for the Duchesse de Montbazon in 1748 that everyone has been looking for over the last 200 years. I think it would be well worth getting it cleaned and checked out. What by the way is the background history concerning this painting? [Group leader: Bendor Grosvenor]

The Collection has commented: 'This is an interesting one. The painting was found in store in 2011 but its origin is unknown (it may be mentioned in one of the old registers but we have not had a chance to look through all of them). There was an enquiry about this painting in 2015. The enquirer back then was wondering whether the painting is not of Bonnie Prince Charlie but is of Henry Benedict Stuart instead. There are no visible markings anywhere on the painting to help identify the artist. We feel that would make good public discussion maybe? Who may have painted it and when? We also do not know if it is a painting of Charles or his brother. Sadly, we do not have funds to get this painting conserved. If Bendor Grosvenor (or another expert) thinks the painting may be of real significance, we could possibly consider trying to crowdfund for it…’ [A detail has been supplied along with another image where the levels have been adjusted to reveal something of the colours not so visible in the unaltered image]

Definitely worth a good clean. I am not a Jacobite expert, but are there good grounds for assuming it's Bonnie Prince Charlie or his brother? Many French sitters of that period by Tocque or Blanchet have blue sashes bearing the Order of the Saint Esprit.
William Thuillier

There are several other versions of this work on Art UK alone:

These are the portraits of Henry Benedict Stuart on Art UK:

There can surely be no doubt that this is Bonnie Prince Charlie. The attached was engraved by Johann Georg Wille in 1748, the same year as the original was painted by Louis Tocqué. The sitter is clearly identified, in Latin, as "Charles Prince of Wales &c &c &c".

The painting we are here discussing is clearly another version of the same portrait.

What is claimed to be an original by Louis Tocque was in the stock of Philip Mould. See https://bit.ly/3KcA8fv
I would trust his attribution, but it is very possible that demand in Europe would have resulted in several studio or autograph copies and versions, so this is not necessarily the original of the contemporary print referred to by David Wilson. There are significant differences, for example in the details of the armour.

The print would give an good impression of the original portrait but is not close to the version in Fife Council. This does not look to be particularly high quality, taking into account its poor condition, and an important difference is the angle and shape of Charles Stuart's face.

The print by Wille after Tocqué is here:

Here is another engraving derived from the Tocqué painting:

It confirms that the plates on the arm were toothed; and the tonal distinctions in both prints suggest also that the edges of the plates were gilded, as often shown in portraits of the prince in armour. None of those details are present in the Mould version.

The Mould version does show the blue Garter sash at the front of the armour (though it's very, very hard to make out in the photo) but lacks it's return sweep round the back and down to the waist, as shown in the Wille print, which is peculiar.

In the Mould version, the ermine-lined cloak is blue, whereas I believe that in all other paintings of the prince - good, bad & indifferent - it is red velvet (as can just be made out in the Fife version).

All this suggests to me that the Mould version of Tocqué's portrait is by no means an original - or even directly derived from the original. But, of course, neither is the Fife version.

Here's an active link to the second engraving:

Or not... I'm obviously doing something wrong.

This should work, David:

The sash depicted in the portrait is likely not the blue Garter sash, but the green St Andrew's cross which Charles Edward wore in every portrait except the Ramsay one done at Holyrood. You can just see the St Andrew's medal hanging from it. This would also likely indicate that it may be of Charles Edward himself, rather than Henry.

Dear all, thank you for your comments so far. From what I gather, the subject of the painting is most likely Charles Edward rather than Henry. Does anyone have any suggestions about when this painting may have been painted? Could it be a contemporary, 18th century work as suggested by Iain MacDonald - Fleming?

For what it may be worth, the now-lost pastel portrait of this sitter by Maurice Quentin de La Tour was copied by a Scottish painter, John Medina III, who might conceivably have copied another French portrait (or a copy of one) of the same prince. See below:

In any case, unless this picture is cleaned and restored, I doubt one can go much further.

It might be worth investigating whether it came into the collection from the Wemyss family (of which Lord Elcho was a member) in Fife.

It's certainly Charles Edward, and comparable with a number of his other portraits: Henry Benedict was actually the better-looking of the brothers.