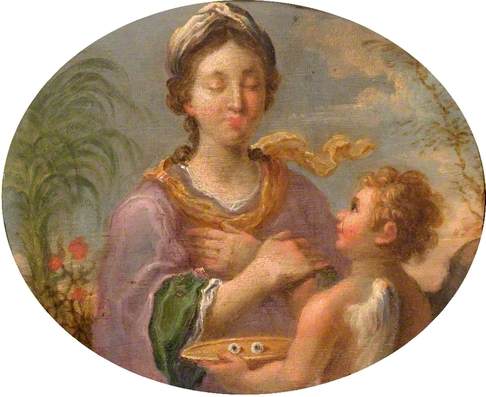 This painting came as part of a large bequest, with a range of other objects. The only information the collection have is in relation to the artist, with Roscoe, Liverpool on the back. They have no further information on the painting or subject matter and would appreciate any help from viewers.

Could the Roscoe from Liverpool here be this one: https://en.wikipedia.org/wiki/William_Roscoe

Not an artist but a significant patron of the arts and collector: http://www.liverpoolmuseums.org.uk/walker/collections/13c-16c/pieta.aspx

The artist of this painting has been changed to Italian (Roman) School, and the title changed to 'Angel Offering Eyes to Saint Lucy'.

Roscoe was an amateur artist, and exhibited in the Liverpool exhibitions. I don't however know of any surviving examples. See http://www.pastellists.com/Articles/ROSCOE.pdf

There is a companion picture to this in the collection (http://www.bbc.co.uk/arts/yourpaintings/paintings/angel-showing-a-small-child-the-way-to-heaven-48586) the subject of which is also uncertain.

It would be useful to have more information on the provenance - the large bequest mentioned above. Perhaps even the types of object bequeathed could provide more clues.

There is an etched copy by Roscoe of a Salvator Rosa etching in the British Museum, bu as Neil says, I do not think that any paintings by him are known today

Probably St Lucy (Santa Lucia of Syracuse, martyr) from the eyes , the allusion being to her name -'light' - with a later legend being that she plucked them out herself because of impatience at a lover who praised their beauty: they are typically shown in a dish, and the putto might be an allusion to Cupid in that connection. She also often carries a martyr's palm, here shown to the left. Roscoe (1753-1831) the Liverpool historian/collector sounds more likely than an artist of that name (unknown to me) and is it even a British hand?

Definitely St Lucy, who, traditions have it, was blinded or blinded herself. One of her attributes is therefore her eyes on a plate. Of more interset is perhaps the possibility that this painting and its companion at Luton were part of William Roscoe's fine art collection, part of which was the origin of the Walker Art Gallery's. This seems more likely than than Roscoe was himself the artist. I have contacted Xanthe Brooke at National Museums Liverpool to alert her of this possibility

Of course there were more than one William Roscoe in Liverpool- the collector , historian, abolitionist and politician just being the most famous member of the family. Who made the bequest - did he have any Liverpool connections?
There is a privately printed 1905 'Roscoeana' written by which contains an incomplete family tree
The famous Roscoe's son William Stanley Roscoe [1782-1843]

If 'Roscoe, Liverpool' on the back is the only information the Collection has I suggest this refers to previous ownership rather than the painter (quite possibly not British).

This and its pendant are tiny paintings on copper. I suggest Italian, late seventeenth century, or eighteenth-century as a starting point.

There is a 15th century image of St.Lucy in Washington, holding her eyes on a stem, and also a martyr's palm.
In this [Roscoe] image, she does not hold a palm, but there appears to be a palm tree in the background.
Is this right for the Italian Renaissance and Baroque, or is it an 18/19th century English conceit?

Yes it seems to be a palm tree in the Luton painting, but nevertheless equating symbolically with a martyr's palm. Both the copper support and the subject matter (St Lucy, more usual in strongly Catholic countries) are rare for Britain.

David Alexander should be shown these as they may be copies of stipple engravings - given the fact that the execution fails to live up to the much more sophisticated design [this the suggestion of Dr Timothy Stevens ] - Richard as you are both in York, could you alert David?

Timothy Stevens suggests too given the inept quality of the execution they could by Roscoe, one of his children or an amateur in his circle

This is certainly an image of Saint Lucy and it's pendant, showing Tobias and the Archangel Raphael, also relates to blindness: Rapahael instructed the young Tobias to use the gall from the fish he caught to cure his father's blindness (Old Testament Book of Tobit). These small coppers must have been the result of a specific commission, given their related subjects.

Hi there
William Roscoe (1753-1831) was best known for his Life of Lorenzo Medici (1796), a pioneering work on the period that would become known as the Renaissance. He was also a collector of books and art works. His money for this came from his writing, but also from his work as a lawyer, and later a banker in Liverpool. He was not hugely wealthy, but he did buy a lot of items from sales in London and on the Continent as well as in Liverpool, which he displayed in his residence Allerton Hall. He was buying works that would later be recognized as important Renaissance pieces, at a time when these were fairly unfashionable, and so they were often relatively cheap. He was also a keen amateur artist; he was involved in setting up art societies in Liverpool.
In 1815-1816 the bank he was involved in went under and despite his attempts to pay off the debts, he was ultimately bankrupted. These attempts to raise money involved selling off Allerton Hall, but first he sold his art and books. Perhaps this work came from those sales of his goods in 1816?
He wrote his own catalogues for these sales, which took place in Liverpool in 1816; they were published jointly under his name and that of his auctioneer friend Thomas Winstanley. I can't immediately find a mention of St Lucy in the lists; if you want to follow it up, the catalogues of the 'select and valuable' collections of William Roscoe Esq, are in local record offices/libraries, with previews on Google Books. There were some copies of the sale catalogues with the names of buyers pencilled in, but I can't pinpoint their exact location---I think I may have seen them in the Liverpool Record Office, but they may be in Manchester---I looked at a lot and so I can't recall exactly.
Detailed accounts of his collecting can be found in my own writings, available on
http://roscoesofliverpool.blogspot.co.uk/p/posts.html

I should have also mentioned, given the connection with St Lucy's and the blind---there was a 'Asylum for the blind' established in 1791 in Liverpool, later the Blind School, and quite progressive for its time. Roscoe was a champion of the early scheme; he was also a patron of the 'blind poet' in Liverpool, the abolitionist Edward Rushton (whose condition was later treated and his sight restored). Perhaps this work has some resonance with Roscoe's/Liverpool's involvement with charitable work for the blind?
Kevin Littlewood

There does seem to be some agreement on the subject of this work - and its companion - but not on the authorship.

While it is still possible that these two small coppers are by someone called Roscoe - from Liverpool or elsewhere - I think it can certainly be said that they are based on Continental models. Unfortunately, the very late-Baroque/Rococo style of the imagery was ubiquitous in Southern, ie Catholic, Europe and, what's worse as far as datijng is concerned, lasted well in to the 19thc in some areas.

Revisiting this discussion after a long interval, I conclude that this small copper of St Lucy is the work of an Italian artist, probably Roman, of the early years of the eighteenth century. The inscription on the reverse recording 'W Roscoe Liverpool' can only refer to the provenance.