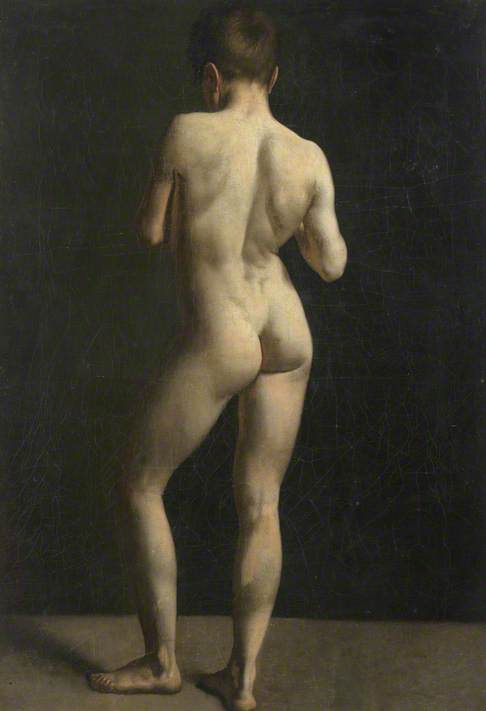 We would be interested to know if anyone can identify the artist of this painting in our collection.

This painting is determined to probably be a competent workmanlike student work of the second half of the nineteenth century created in an artist's or art school's life room.

This note will appear on the new version of the Your Paintings website in January 2016. Thank you to all for participating in this discussion. To those viewing this discussion for the first time, please see below for all comments that led to this conclusion.

I suppose the obvious candidate is William Etty - though the anatomy in the legs seems a bit weak, especially the left foot - I suspect it is probably a student's work, from the Academy in the early 19th century.

Any other info on provenance etc? Or markings on the reverse?

Forgive me but is this not much later than Etty. Beginning of the 20th century perhaps?

Could well be early 20th century. Difficult to date without seeing the canvas. Perhaps I've given too much creedence to the collection's suggested date. With that much craquelure though, I'd expect it to be 1880s at least?

Unfortunately we do not have a provenance for this painting and there are no labels or inscriptions. It is listed as being 19th century French school which is obviously incorrect.

Why do you say obviously incorrect? It reminds me somewhat of Thomas Eakins nudes in pose. While American, he studied at the Beaux Arts in Paris in the 19th c.
I see no reason to rule out either French or 19th c.

Can Tullie House tell us more about the collections of the donor and of his forbears? Were there auctions of parts of it, which reveal what other works were in these collections- or inventories made earlier in the 20th century? For, as I am sure contributors to this discussion are well aware, it is virtually impossible to firmly attribute a nude study of this type to any artist without some documentary evidence. Are there any labels or inscriptions on the back of the frame or canvas, or even an auctioneer's or dealer's code?
The painting certainly appears to be late 19th or even early 20th century in date, but it is hard to say to which nation the artist belonged. Several European countries had artists painting studies like this, quite apart from Britain and the United States

Tullie House Museum and Art Gallery Trust mentioned in an email that they have no more information about the acquisition or provenance, unfortunately.

Darrell Sewell (formerly curator of the Philadelphia Art Museum), would be the person to comment. Perhaps he can be reached via the Museum. He retired in 2002. He edited their catalogue on Eakins in 2001.

Thanks for the suggestion Bruce. I have emailed the Philadelphia Museum of Art asking if a message could be forwarded to Darrel Sewell.

To me there seems no relationship with Eakins. His nude studies are more sketchy especially in the background, and painted with with a fluidity and confidence lacking here. The pose is reminscent of Eakins only because it is the kind of natural, comfortable pose taken up by models.

There is always an immediate tendency to think of the famous names (like Etty and Eakins here) when confronted with an anonymous painting. But the truth is, as was hinted at earlier in the discussion, without further documentary evidence the most we can truthfully say is that it is probably a competent workmanlike student work of the second half of the 19th century from any artist's or art school life room.

I agree with you Andrew that it is not Eakins. His nudes were usually painted from photographic studies and would have more been more accurate in pose(re the awkward left leg), not to mention your comments on the background. I think it does however reflect the French Beaux Arts training of Eakins and should not be assumed to be English school without evidence.

I recommend closing this discussion as I think it unlikely that, without further documentary evidence, we will be able to attribute this painting. I would stick to my conclusoon that "the most we can truthfully say is that it is probably a competent workmanlike student work of the second half of the 19th century from any artist's or art school life room".

It reminded me of the Alfred Kingsley Lawrence in the Hatton Gallery collection, though that would make it early 20th century.

The collection is happy for the discussion around this painting to be closed.

Title
Male Nude, from Behind

Description
This portrait is probably a competent workmanlike student work of the second half of the nineteenth century created in an artist's or art school's life room. (This was noted by Andrew Greg during an Art Detective discussion which ran until November 2015.)