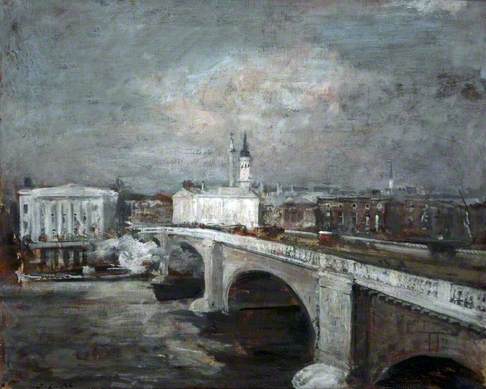 The most similar view is Harold Workman's 'Chaos on London Bridge' - Guildhall Art Gallery, but I doubt that he is the artist
http://www.bbc.co.uk/arts/yourpaintings/chaos-on-london-bridge-51937

This painting is signed lower left in black. Regrettably the resolution isn't good enough to magnify on screen.

It looks quite close to Richard Hayley Lever, but not the right palette:

The resolution on Your Paintings is slightly better - the signature could perhaps be ' S (or J) - L - ??St L ' (the last part very uncertain). Any chance of a close-up of it from Atkinson? It could solve things very quickly.

Failing which, for the time being at least, the first thing is to establish date. The building next to the bridge on the right is the old Adelaide House; its successor (still there today) was built in 1924-5 - I'll check later, but the old one was probably demolished not long before. So pre-1924, anyway, which I think makes it too early for Workman, whose London works look later (1930s, I think...possibly late 20s). He seems to be more precise in his architectural detail anyway.

The bus on the right (if it is a bus) is too impressionistic to be easy to interpret, but it is mainly red, and this means post-1907. Its relatively low, albeit double-decker size and the white band at the top suggest to me an open-top type 'B' - this was introduced in 1910 and used for many years thereafter (certainly well after WWI). Or is it meant to be horse-drawn? If so then it's pre-1912. I'll look for some slightly later images, but here's an image of a postcard sent in 1912 (but dating somewhat earlier) - the buses are not dissimilar. Anyway, we're definitely down to 1907-23.

I'm afraid the title (still) on the YP site made me giggle - FLORENCE?? Has anyone ever painted Florence in such a symphony of greys?

We can narrow that to before August 1920. An image from the Hulton Archive with the caption "20th August 1920: Following the demolition of the Pearl Building on the north side of London Bridge, the Church of St Magnus the Martyr can now be clearly viewed from London Bridge." It appears that the building's name had changed by the time of its demolition:

In our painting St Magnus is the black-topped white spire behind the big white Adelaide / Pearl building, with The Monument showing immediately to its left.

I suggest that this could be one of Jacques-Emile Blanche's series of London and other English views, which range in date from the early 1900s to the 1920s. A close-up photo of the signature would be very helpful, but in the meantime what can be discerned of it is not incompatible with the signatures on the following:

I shall check with Jane Roberts, who is compiling the Blanche catalogue raisonne, to see what she thinks.

I don't think that it is by Blanche, although I have considered him, Richard. It may well be by an artist trained at the Slade - one thinks of Ambrose McEvoy's monochrome Thames paintings of before the War, but I would be surprised if it was by him [having just looked hard at his work recently in order to write a dictionary entry for the de Gruyter multi-volume Kunstler-Lexikon]- but as you say that signature/inscription should reveal all

The data from the PCF database to the Your Paintings website is only synced once every 3 months, hence the different titles.

The title on Your Paintings will change by the end of June.

I agree with Richard Green. It looks like a Blanche and I can see "J. E. Bl" on the higher res image.

I am also convinced by your Blanche suggestion, Richard.

Even at these resolutions the signature evidence is compelling, particularly by comparison with the first Crystal Palace image. I have isolated the signatures from that and London Bridge, and tweaked the brightness/contrast of the latter for clarity - images attached below.

However there is a further clincher for me in the way the sky is handled in the same two paintings. Both give a curious impression of having faint lines of writing in the sky - almost as if he scribbled notes, or pasted old letters onto the canvas, and then painted the clouds over them. Perhaps he did - I fancy I can even make out some words...but then we all know about art historians who think they can see things written in paintings. Anyway, whether or not they're really there, both give that impression - I have again isolated areas in each, and played with the exposure to emphasize (attached).

The thing that troubles me about the attribution is the close toned nature of this canvas, not something for which Blanche was generally known . In this respect it is definitely not like the other paintings adduced. However, this may be a sign of inadequate knowledge of the full range of this artist's townscapes. May be Jane Roberts should be asked about this work
Certainly it was the York picture that initially made me wonder if the picture under discussion could be by Blanche

Another comparable signature on Blanche's 1908 Fish on a Silver Plate ( http://www.bbc.co.uk/arts/yourpaintings/paintings/still-life-fish-on-a-silver-plate-74274 ). See attachment below.

Please see attached a crop of the artist's signature.

I can't read the crop of the signature but I have just checked the painting at the Museum of London which is signed bottom right J.E.Bl and there is an inscription on the back saying Crystal Palace, Sydenham, juin 1907/J.E.Blanche/William Stout's/Knightsbridge/SW.

Attached is a close up of Blanche's signature from a painting of Brighton sold at Christie's in 2010.

Clearly Blanche (or someone masquerading as Blanche).

There seem to be verso inscriptions on many of his paintings, like Pat's example ^

Thanks, everyone, for your further comments and examples of signatures etc.

Jane Roberts writes: 'Yes, it certainly looks like Jacques-Emile Blanche. The signature looks OK.' She dates the signature to circa 1905-1914, during which period, she points out, JEB spent six months each year in London (this ties in with Osmund's suggestions on dating based on the subject matter). The painting will be included in her catalogue raisonné. In this she already has another view of London Bridge, which she hitherto believed was painted circa 1930 based on a postcard but now thinks, on the evidence of the Atkinson AG painting, might be an earlier work signed much later.

I think we can safely attribute this painting to Blanche and would, on the basis of this information, make the recommendation to the Atkinson. If anyone is visiting the area and can go and actually see the painting in the future it would be good to have a report but in the meantime I think we can probably call a close to the artistic attribution discussion.

I will update The Atkinson's archive file accepting the attribution to Blanche and the view as London Bridge. Thanks for this invaluable information. I hope to have the canvas and frame conserved for inclusion in a collections based exhibition in early 2015.