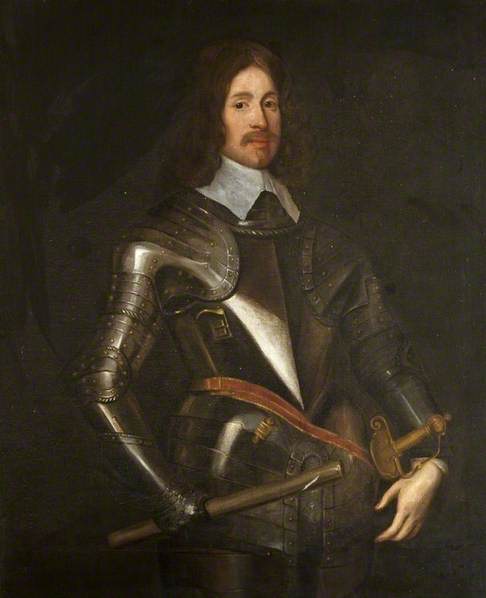 Can anyone identify this armoured gentleman please?

This discussion is now closed. A conclusion was not reached.

If anyone has any further information about this work, please propose a new discussion from the artwork's page on Art UK.

I'm afraid I can't hazard a guess as to the sitter but the pose is clearly modelled after the figure of Charles I Louis the Elector Palatine in Van Dyck's 1637 double portrait with Prince Rupert. http://www.tate.org.uk/research/publications/tate-papers/van-dyck-and-france-under-ancien-regime-1641-1793

Or at some point it has either been rather zealously 'restored' or crudely overpainted to more resemble the Van Dyck pose, it's hard to tell from the photograph.

Thank you for your comment which may help towards resolving another query over our portrait of the young Prince Rupert (attached). Our portrait is very similar to the character on the left of the van Dyck 1637 painting, but it is not clear which of the two figures is Rupert and which is Charles I Louis. The character on the right seems to be the elder brother although the title indicates that Charles Louis is the one on the left. If the left hand one is Rupert then this helps to confirm that our portrait is correctly identified (doubt had been cast on this). Can you say which is which please?

I agree on the similarity of the poses but this is not dissimilar to other paintings, and our unknown man has a much smaller lace collar and no medallion. Also his right hand wears a gauntlet, which makes his left hand look rather incongruous!

However we would still like to know the identity of our unknown man.

Interesting pic, can we have a higher resolution image? The image attached to second comment is certainly Charles Louis, not Prince Rupert.

In my opinion, the pose of this painting is based on the full length of Charles I by Van Dyck usually dated 1638 (Hermitage - St Petersburg), which shows the King in 1610/15 plain Greenwich Armour (pictured) wearing a gauntlet over his right hand.

This pose, including the armour, was often used in a cut down 3/4 length version which is found in several paintings by Van Dyck;

Although the double portrait of Charles Louis and Rupert is earlier, and features the same Greenwich Armour, I imagine it was probably the Charles or Northumberland paintings which inspired the Christie Crawfurd painting.

Van Dyck's English Portraits, in which sitters wear armour, were copied and adapted relentlessly by British artists after his death in 1643 due to the popularity of this particular 'mode'.

All interesting stuff, but sadly it brings us no further to identifying the sitter.

justus van Egmont
leiden 1601-1674 Antwerp
a portrait of a knight of the order of the saint esprit.

I am trying to obtain a high resolution image - perhaps the PCF could provide one while I await a response.
All the suggestions received have been helpful as they have enabled identification of other portraits in the collection. We now know we have a portrait of Charles I Louis, and our portrait of Louis XIII is probably a copy of a portrait by Justus van Egbert.
The gentleman's armour is almost certainly influenced by the van Dyck portrait of Charles I in the Hermitage, in which Charles appears to have an elongated neck! At least we know where the missing gauntlet is. Could this be symbolic?
I am not convinced about him being a knight of the order of the saint esprit as I would expect him to be wearing a cross of the order around his neck, probably hung from a light blue ribbon (cordon bleu).
If ours is a copy of one by William Dobson, it is said that he spent some time at Oxford painting several cavalier officers, many of which remain unidentified. It would helpful if it could be confirmed that this was a copy after Dobson - perhaps the hi-res image will help?

I don't think it is particularly symbolic that he is not wearing gauntlets on both hands. These poses were often copied by VD in different armours too, including this posthumous portrait of Prince Henry which was probably intended to originally hang alongside the Hermitage painting.

Another small change is that the sword he carries has been updated from a swept hilt rapier (in the VD portrait) to a proto-mortuary (ish) sword.

Although Dobson did sometimes reinterpret VD's portraits and poses in his own, I personally doubt that the Christie Crawfurd painting is a copy of a lost Dobson.

As an aside, the collection's portrait of Louis XIII looks a rather good version of de Champaigne's. See http://commons.wikimedia.org/wiki/File:Louis_XIII_(de_Champaigne).jpg

As requested by the collection, attached is a higher resolution image of the painting in question.

Thank you Jade for the hi-res image. I now have copies of all the hi-res images of the collection.
It seems unlikely that the gentleman in armour will be identified, nor the painter of the original.
But as a bonus we now know the identity of our mistakenly identified "Young Prince Rupert" as his brother Charles Louis, and the original artist of our "rather good" Louis XIII copy as de Champaigne.
We think this is a fair result and suggest the discussion be closed.

Tim Norris, for the collection

Is it vaguely close to Thomas, 3rd Lord Fairfax?

If the Walker studio portrait was a good likeness, I would say no. See attached comparison.

The collection's portrait of Louis XIII looks like one of the many derivations from Philippe de Champaigne's "Louis XIII couronne par Victoire", which include Egmont's versions. The most frequently reproduced one is the Prado painting of c. 1655, but the strongest, most vivid likeness in this pattern is, for my money, the one at the Carnavalet.

The details of the lower section (lance rest, sword belt, commander's baton) also bear some similarity to a Van Dyck portrait identified as the same sitter in the same armour:

The Montrose Society would be the people to speak to. Hope that helps?!

(Having just "reported" my own comment while trying to edit it - the armour in the "Van Dyck Montrose" seems to be the same as that worn by Prince Charles Louis, and also the same as that in the Dobson Montrose - presumably a studio set kicking around Oxford in 1643?)

Also, I have managed to include the wrong link, because Firefox is stupid - this is the Dobson Montrose:

It looks like we're unlikely to get this one on the basis of pure likeness, and would need some other documentary or provenance evidence to lead us towards a family or traditional identification. Until we get that, we should probably consider closing this discussion for now?
B

The collection has been contacted about this recommendation to close the discussion.

Description
Bust portrait of the sitter in armour holding a baton.