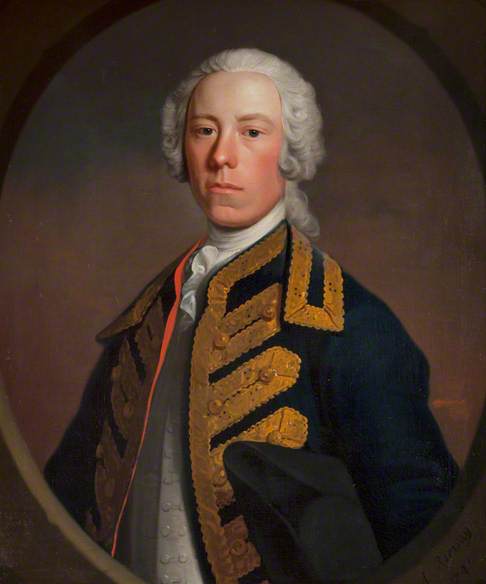 I wonder if anyone might be able to give more information about the sitter for this portrait, or perhaps confirm if the uniform is indeed a naval one?

The sitter is not wearing naval uniform. The title of the work has been amended to:

'Portrait of a Gentleman in a Blue Coat'

If you would like to start a new discussion on who the sitter is in light of these findings, please click the link here: http://www.bbc.co.uk/arts/yourpaintings/paintings/portrait-of-a-naval-officer-183440

If it is a blue jacket with white undercoat it suggests it is british navy. The gold lace buttons also mark as a lieutenant upwards but all the extra braiding suggests this is a dress coit of some kind. he looks very young to be high up in the navy. I am not an expert by the way, just interested.

The irregularity of naval officers' uniforms at this stage makes this trickier than usual. Have you asked Pieter van der Merwe at the National Maritime Museum?

Many thanks for these comments and the contact suggestion. A member of the public spoke to me some time ago about this painting and said that in his opinion the sitter was not wearing a naval uniform. It was the first time anyone had questioned the information in the title and I have been intrigued to find out more about the work since then.

Following up Neil Jeffares's comment, fine picture as it is I agree the coat is not Royal Naval uniform despite the button-hole facings being reminiscent of the 1748 flag officer's dress coat (which of course reflected current fashions rather than being their origin). As Amy Miller, my more expert NMM colleague on these matter sometimes remarks, simply wearing 'navy blue' does not indicate a marine connection since many (if not most) gentlemen in the period would have had a brass/gold-buttoned blue broadcloth coat of some sort.

looks exactly like actor Nick Dunning ,who plays the part of-Mal-, in recent BBC drama -Quirke-.it is possible he might know about naval connections in his family going back that far .as i do a lot of drawing, i can see that his features are exactly the same!

Since the 1741 date of the painting is not included on this page I'm afraid I hadn't spotted it, but it obviously precludes any official naval connection for the reason Mark Price gives. Before 1748 there are enough early 18th century portraits of British officers wearing blue coat over red waistcoat to make that a marker of a possible naval connection, but its far from a rule. Blue with white cuffs, waistcoat etc., was reputedly a result of George II's favouring that combination after admiring the Duchess of Bedford out riding in those colours. The two 'standard' books that cover the topic are Dudley Jarrett's 'British Naval Dress' (1960) and Amy Miller's 'Dressed to Kill', (2007). The former is less thorough than the latter but, in truth, its a difficult topic to follow in detail given the various tweaks to uniform of differing ranks between the main points of change, though the first period 1748-67 is unproblematic.

This Ramsay portrait that was with Philp Mould some years ago shows a very similar jacket:

I wonder if Bendor has an image on file of the portrait of James Ogilvy 6th Earl of Findlater (Scottish Private Collection) cited in the text?

The Philip Mould portrait is dated to 1740 so presumably in the early 1740s these jackets were the bomb.

Hogarth's 'Strode Family', in the Tate (but sadly not on display), also features a gentleman in similar attire, this time with red cuff edging and red breeches. Of course prior to 1749 many of London's portraitists used Van Aken for drapery/clothing, including Allan Ramsay. Therefore the costumes did not invariably belong to the sitter.

Thomas Hudson's portrait of Admiral John Byng, most renowned for his execution 'pour encourager les autres', sports a similar jacket and this time it is a naval uniform. Of course Hudson also used Joseph Van Aken, although this portrait is said to be painted in 1749, the year of Van Aken's death.

Is there a sitters book existing for Ramsay for this period?

The identity of the sitter of this fine portrait by Ramsay of 1841 is actually quite important to Britain’s Maritime history, as this research indicates it to be the aspiring young 36 year Capt John Byng, in the prime of his advancing illustrious naval career, at the age 36 years. He is obviously eight years younger and equally 8 stone lighter, than his more rotund visage some 8 years later at 44 as an Admiral, in the famous portrait at Greenwich, also by Ramsay. The physiognomic features all match well, allowing for the differences caused by much extra facial fat, body weight, age, and a differing shaped (wig?), around the forehead area, and changed facial angles of the sittings. However the eyes and their colour, including their spatial relationships, with the identical Noses, Mouths and jawlines, all indicate this is the rather gaunt, younger Byng, in what was at that time, his Captain’s Dress.

I would also suggest the depiction of the facial features in this superb portrait is superior to that of Ramsay’s later aged portrayal of him; with a keener expression, more handsome, and a purposeful gaze, whilst the later example reflects a sedate life of success & leisure. If required further forensic comparison should further confirm his identity.

Interestingly, the name “Byng” came to mind the moment I saw this image, which was ironically also noted when later reading the posts above, only regarding this sitter’s’ dress type from the later portrait, whilst this earlier countenance remained unrecognised.

As with other contributions recently provided through this research, I trust they shall tangibly assist the advancement of art history and its present custodians, conjointly with Britain’s national heritage.

John Byng was born in Bedfordshire, England, the fourth son of Rear-Admiral Sir George Byng (later Admiral the 1st Viscount Torrington).
By the time he entered the Royal Navy in March 1718,[1] aged 13, his father was a well-established admiral at the peak of a uniformly successful career, who since supporting King William III in his successful bid to be crowned King of England in 1689 had seen his stature and fortune grow. A highly skilled naval commander, Sir George Byng won distinction in a series of battles and was held in esteem by the monarchs he served. In 1721, he was rewarded by King George I with a viscountcy, being created Viscount Torrington.[2]
Early in his career, Byng was assigned to a series of Mediterranean postings. In 1723, at age 19, he was made a Lieutenant, and at 23, rose to become Captain of HMS Gibraltar. His Mediterranean service continued until 1739 and was without much action.[3]
In 1742, he was appointed Commodore-Governor of the British colony of Newfoundland.[3]
He was promoted to Rear-Admiral in 1745, and to Vice-Admiral in 1747.[3] He served on the most comfortable stations, and avoided the more arduous work of the navy.[4] He was Member of Parliament for Rochester from 1751 until his death.[5]

We can be absolutely certain this sitter is not John Byng. The likeness, age of the sitter and likely date of the painting do not correspond at all. If this case is to advance, we first need the advice of an expert on naval uniform for the period.

I would challenge the opinion, that whoever "we" are, have so arbitrarily put forward as being "absolute" and/or conclusive. In art history, faces are more in the realm of forensic determination than any art historical "opinion", including mine. That is why I suggested further forensic advice could assist in this case. Likewise, those more experienced in Dress, have already outined above the problematic nature in this particular case.
Notwithstanding, there are common features of 'likeness, quite apparent in both faces, that allowing for age remain valid here. The dates would also accord.

As a portrait artist I can only say that the Byng comparison proves without a doubt that the sitter is NOT Byng. The bone structure is completely different as well as key likeness indicators such as the length between the nose and mouth. I agree with both Bendor in his assessment and Greaeme in his statement that "absolute" can never be determined. We can only make the best judgement on the information at hand.

Just to add one more comment on costume: isn't it interesting that he is not carrying a naval hat? Looks like a country squire's 'walk with a dog and gun' hat. Also I have never seen a similar collar flap on a naval jacket.

Just picking up on Bendor Grosvenor's last comment after a long break: there should be no more debate about the dress here being 'naval'. At the time it was painted (1741) indigo-dyed blue broadcloth was widespread for gentlemanly attire and remained so well into the 19th century. There are certainly enough portraits showing that RN officers often favoured blue coats before official uniform was introduced in 1748 but the tendency to label any man shown in one before that date as 'naval' (or even 'seafaring') is just false inference based on the fact that blue then became the regulation RN colour (hence 'navy blue'). That is presumably how, and probably long ago, this canvas got its misleading current descriptive title of 'Portrait of a Naval Officer': there appears no other reason to think he is and 'Portrait of a gentleman in a blue coat' would be a great deal less so. Perhaps that could be recommended?

This is from the collection. Their IT department won't let them use the site:

"Many thanks for those comments, Pieter, I am more than happy to go with your suggestion and rename the work."

Title
Portrait of a Gentleman in a Blue Coat

Acquisition method
gift from the Trustees of the Stuart Anderson Caird Bequest, 1954

Description
This painting of a man wearing a wig and naval uniform decorated with gold braid was executed in a feigned oval.