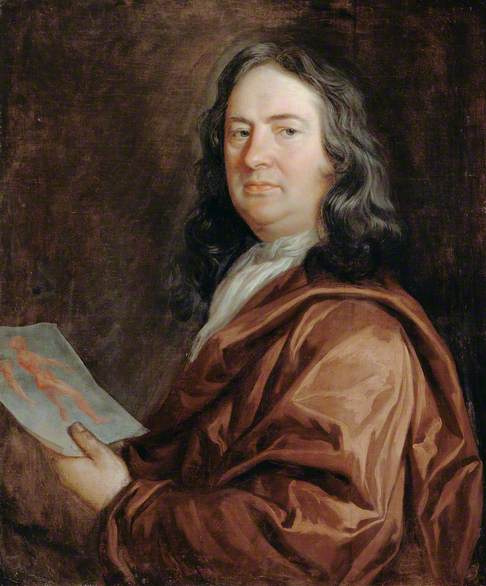 The Collection has commented on its website: 'The pose matches that of Kneller's 1690 portrait of the shipbuilder Sir Anthony Deane holding a drawing of a ship (National Portrait Gallery https://bit.ly/3iKbeZD). An attribution to Mary Beale has been suggested independently by Allen, K. Hearn and T. Barber (verbal communications, 1997). The sitter holds an anatomical drawing and this has suggested an identification with the physician-poet Sir Richard Blackmore (d.1729), to whom he bears some resemblance (cf. John Closterman, cat. exh. National Portrait Gallery, 1981, no.13). There is also perhaps some resemblance to the physician Sir Edmund King (1629-1709).'

Jennifer Scott, Director, Dulwich Picture Gallery, email, 18/06/21, added, in addition to the entry on the website 'You can find more information in the DPG 'Catalogue of the British Paintings' by John Ingamells (2008).'. I don't have access to that entry, but will try to obtain it and post here.

In relation to the Closterman reference, I do not know what was no. 13 in the 1981 exhibition cited above, but here is an impression of a print of Sir Richard Blackmore after Closterman in the British Museum collection https://bit.ly/3gGnPLM

It's almost too obvious a suggestion to make, but if this is by Mary Beale and if it is of a physician, one candidate has to be her son Bartholomew Beale (b 1656). He originally trained as a painter with his mother before taking his MB at Cambridge from 1680. An artistic background might be hinted at by the anatomical illustration in this portrait being painted rather than drawn.

The latter in particular has certain facial similarities to this portrait. The main difference is in colouring with the earlier pictures showing Bartholomew as dark blond, but hair can darken over time (his mother was blond but his father dark) and if this was painted around 1690, he would have been mid-30s, about right for this portrait.

This looks older than mid 30s to me, Mark.

I have not been able to access a copy of Ingamell's catalogue entry to see if this helps this discussion. By way of background information, a link to an article on the Royal College of Physicians website on Beale's friendship with neighbour Thomas Sydenham https://bit.ly/3ihevgW

Attached is the entry in the'Catalogue of the British Paintings' by John Ingamells (2008).

Thank you Jacob, I walked round to Dulwich Picture Gallery earlier this week but they did not have it at the Shop or Information Desk.

As another commenter suggested this does look like Thomas Sydenham
https://commons.wikimedia.org/wiki/File:Thomas_Sydenham_by_Mary_Beale.jpg

I do not see in John Ingamells' catalogue record any strong evidence that the man in this intriguing portrait was a physician, rather than an academician, a drawing teacher, a virtuoso collector or traveller in Europe, or a knowledge-worker of some other kind. Any of these seems possible (including a physician).

If this were a physician holding an anatomical drawing, I think the last name I would expect would be Thomas Sydenham. Sydenham wrote a long attack on the value of anatomy for his profession*, referring to "laborious anatomists", and making remarks like "All that anatomie can doe is only to shew us the gross and sensible parts of the body, or the vapid and dead juices, all which, after the most diligent search, will be no more able to direct a physician how to cure a disease then how to make a man." It is those "gross and sensible" parts that are displayed in the drawing. A portrait of Sydenham holding some attribute would be more likely to show him with a volume of one of his own publications. But it is more likely still, given his mentality, that he would prefer his portrait to show him alone and not with any prestigious artefacts.

The drawing which the man is holding appears to be a red chalk drawing of a design which survives in a very rare engraving by Philip Galle (1537-1612), which Galle produced as part of an even rarer series of anatomical engravings, entitled 'Instruction et fondements de bien pourtraire', 1589 (cannot attach the image, as I'm getting an error message "Internal Server Error", but this link may work:
https://skd-online-collection.skd.museum/Details/Index/982220 )**. Galle could have copied the design from a drawing by a more distinguished artist, and this drawing, or a version of it, could be represented in the Dulwich painting.

Alternatively, as the principal purpose of anatomical engravings, and for that matter, all the other subjects engraved by Galle and his business in Antwerp, was to provide models for artists to copy and learn from (as stated explicitly in his title and dedication to the series), the drawing could be one of these copying exercises rather than an original drawing by Philip Galle, who as far as I know was never a collectable artist as a draughtsman, but rather more as an engraver of edifying subjects, sacred and secular.

The title of that Galle series of engravings indicates it was meant as an anatomical aid for artists, nothing to do with medicine.

The face does not look like a Beale face to me. It is better drawn.

The Galle print in question, along with others form the same set, is in the Rijksmuseum. It is an écorché, a human figure shown with the skin removed to display the musculature. The date, presumably of publication, was 1589. The print states that it was made and published by Galle, but there is no mention of a separate draughtsman as the originator of the design, and the designer could have been Galle.

An écorché is a kind of technical image meant for instruction, not something made as a work of art to be enjoyed as such. Thus, as with anatomical drawings meant for medical people, it would not be made by an artist but by a specialised draughtsman. It is extremely unlikely that what our sitter holds is the original drawing from which the print was made.

Title
Portrait of a Physician