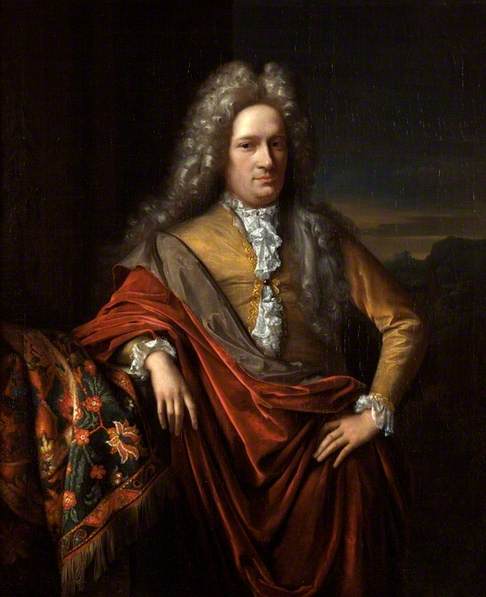 We would like to learn more about this painting and its pendant, http://bit.ly/38pnJmA.

The Collection has commented: 'When the painting was given to the Gallery the sitter was thought to be John Churchill, and the pendant of his wife, Sarah Churchill, but subsequent research strongly suggests that this is not the case.'
The artwork description states 'Van der Werff's elder brother Adriaen was an extremely successful and highly paid artist, working for kings and princes. For many years, Pieter simply made copies of his brother's paintings but in later life he established himself as a painter in his own right. The sitters are clearly wealthy, wearing lace, silk and velvet, but their identity is unknown.'

The date given in the Art UK entry for the pendant, c. 1680, is incorrect, since both pictures are dated 1709.

It appears that Adriaen did paint John Churchill in 1704:

Pieter's work was derived from and heavily indebted to his brother's, from which he borrowed models for composing his originals. Thus, it can be difficult to separate the two.

The same patterned/embroidered shawl appears in both portraits, which probably has some significance

Perhaps he was a merchant who traded in luxury textiles from the East.

The shawls could be of Indian origin. India was a major exporter of textiles at the time, and by no means just luxury textiles.

Well-spotted, Jacinto, Yes, I think those are fine quality Indian textiles in the two paintings (clearer images of them might be useful), and their prominence also suggests to me that he was a successful East India merchant - unfortunately there were an awful lot of them. He may or may not have recently returned from India himself, but it's one possible line of research. Is there anything of significance in the background of her portrait? - again a higher-res close-up might possibly show something interesting.

That's my final post for a (short) while. All good wishes, everyone, for Christmas or, um, preferred other December celebration. Let's hope for a better 2021 with access to libraries - and ditto for Collections to their artworks and files. Keep healthy!

May it be so, Osmund.

As for the picture, it may be my imagination, but the man looks more mercantile than aristocratic to me, and in essence, so does his wife.

Like Amsterdam, the port city of Rotterdam, where both van der Werff brothers were based, was an important center in the Indian textile trade. Pieter van der Werff is known to have painted portraits of several prominent members of the VOC (Dutch East India Company), and this sitter could be such a person.

The VOC portraits I've seen by Pieter van der Werff are busts that could be considered of corporate type, though no doubt he did 3/4 lengths of a more personal nature, like the ones under discussion, obviously at a higher price.

I was just wondering if the Shawl is actually a Carpet- which was commonly used to denote wealth. ????

Louis, carpets would be shown on the floor, as they often were in Jacobean portraits, for instance. They would not be shown loosely draped over something, like, well, shawls.

I agree with LouisMusgrove. I think this is a carpet- as they were soften shown in portraits covering tables as status-giving symbols. Furthermore, the fashion for women to wear shawls in Europe dates only from c 1785-1790– and certainly not in 1709 - building up gradually in parallel with the development of high waisted neo-classical fashions. SLIDE 1 Fashion Plate, The Ladies Magazine. 1801. V and A no. E.29.1955.

There are surviving shawl-like textiles from c 1700 but these are related to male Mughal waist girdles or sashes. They were delicately woven in light weight silk or cotton and are nothing like the heavy looking textile in this portrait. SLIDE 2 Portrait of Emperor Alamgir, wearing silk girdle, c. 1700 Deccan India prob Golconda— SOTHEBYS, Sale of Arts of the Islamic World Lot 127. 26 Apr 2017 and SLIDE 3 Mughal sash, early 18th c, V and A. no 317.1907.

There is, as we know, a long tradition of showing status-giving woven carpets in portraits, and I would suggest this one repeats that tradition. I am guessing from the specifically and characteristically curvilinear lines of the floral designs on the carpet in this portrait of 1709 that it may well be Persian- from Isfahan. Please note some floral similarity with SLIDE 4, the Seley carpet detail, Safavid, late 16thc, MET NY no 1978.550. Slide 5 is a close up of the carpet in our 1709 portrait. SLIDE 6 is a close up of the Seley Carpet.

Thank you, Lou. I did not realise the use of shawls as apparel started so late in Europe. If our portraits are depicting carpets, they are not positioned or in use as such, which implies they are simply being flaunted as a status symbol in rather vulgar fashion, which would presumably be more in keeping with mercantile as opposed to aristocratic money (though I suppose it may conceivably have been the painter's idea).

As to carpets- Adriaen seems to have used the same or similar carpet in this picture in the Royal Collection Trust- dated 1681.
https://www.rct.uk/collection/404625/a-boy-and-a-girl-with-a-guinea-pig-and-a-kitten

Lou has already commented on the widespread use of luxurious oriental textiles in European painting from the 16th century onwards.

The delicacy and the sheen of these carpets, more obvious in the high-resolution image attached, suggest fine wool or silk, or a mixture of yarns.

The flow of ideas was in both directions. https://bit.ly/2JMe0OU

I found text and a few images on the Met. Web site: 'Carpets of the East in Paintings of the West. expo from 2014.'

The two versions of the Somerset House Conference (1604) -one at the NPG and the other at the NMM - have a well-known example of a carpet-covered table. A knowledgeable Middle Eastern visitor to NMM once told me very precisely what type of carpet it was, which I failed to write down at the time. If someone else knows, I'd be grateful to hear: it's not on either NPG or NMM collection web pages, though the latter calls it 'a "Holbein" carpet from Anatolia' and perhaps from Henry VIII's holding of about 400: links here -

Could our sitter be Johann Wilhelm Elector Palatine Pfalz ???
http://community.artauthority.net/work.asp?wid=40991&pos=7

Perhaps is this Pieter van der Werff who was baptized January 24, 1685 in Dordrecht Netherlands. He was married to Nandina van der Zee Vrijmoet. They had 1 daughter. Between 1665 and 1667, the Republic of Suriname conquered the English. The first people from Dordrecht to start plantations there were Govert de Bruijn, his brother-in-law Pieter van der Werff and his childhood friend Simon van Halewijn. Pieter van der Werff owned the Dordrecht, New Accaribo plantations and took over Killestein from his brother-in-law. The Dordrecht sugar plantation is known to have over 200 slaves working there. Coffee and cotton were grown on Killestein. His son Pieter was a commercial agent of the Middelburgsche Commercie Compagnie (MIC) and in that position responsible for the sale of slaves and merchandise in Suriname. This also included tracing runaway slaves.

The same Pieter van der Werff owned the drugstore De Rozynkorf on the Voorstraat. Legend has it that someone once told Pieter about his dream of a hidden treasure in his garden. The grocer did indeed find a consignment of gold there, after which his business flourished. The origin of the gold leather room from drugstore De Rozynkorf in museum Van Gijn may be explained by this.
Drugstore De Rozynkorf existed until 1976. Simon van Halewijn, son-in-law of Grand Pensionary Johan de Witt, was accused in 1693 of secretly conducting peace negotiations with a French envoy. Found guilty of treason, he was sentenced to life imprisonment in Loevestein Castle. We do not know how he did it, but Simon managed to escape in 1696 and, most likely through his connections with the WIC, to flee to Suriname. Van Halewijn owned the sugar plantations Beaumont, 't Eylandt, Puttenzorg, Peperpot and Mopentibo. Like his friend Pieter van der Werff, he stayed in Suriname until his death. https://www.canonvannederland.nl/nl/page/143785/dordtse-plantages-in-west-indië He died in 1730.

Just a diversion-I have accidentally come across a reference that the Court painter of Johann Wilhelm was a Dutch lady called Rachel Ruysch--who had a six decade career-- women in Art etc :-) .

Is it possible that the sitter is Pieter van der Dussen (1675–1726) and the pendant portrait is his wife Dina Margareta de Bye (1680–1740)? Her portrait (and a remarkable amount of information about it) is on the website of The Leiden Collection.

There are many similar elements in the works depicting the women, including: hair, face, dress, and the small tree. Yes, Dina Margareta de Bye has lighter eyes than the unknown lady but the Art UK work seems to have darkened with age. The sitter does appear to be older in the Art UK work, as one would expect. I have attached two composites.

Dina Margareta de Bye and her husband lived in Dordrecht. The Wikipedia entry for Pieter van der Werff (1665–1722) indicates that he spent most of his working life in Rotterdam, which is not far from Dordrecht. https://en.wikipedia.org/wiki/Pieter_van_der_Werff

Finally, the write-up indicates that Dina Margareta de Bye owned three paintings at her death. Footnote 5 of that reference can be expanded to read the following two sentences:

“After ressettling in Leiden after her husband’s death in 1732, Dina purchased her parents’ house on the Rapenburg. According to the estate inventory made after her death in 1740, she had decorated the large room facing the Rapenburg with “three paintings in gilt frames, that is, one portrait of Mr. and two of Mrs. Van der Dussen.””

The faces are quite different, Marcie, assuming the portraits show tolerably accurate likenesses.

Title
Portrait of an Unknown Gentleman

Description
Pieter van der Werff was a Dutch painter. His elder brother Adriaen van der Werff was an extremely successful and highly paid artist, working for kings and princes. For many years, Pieter simply made copies of his brother’s paintings but in later life he established himself as a painter in his own right. The sitters are clearly wealthy, wearing lace, silk and velvet, but their identity is unknown.