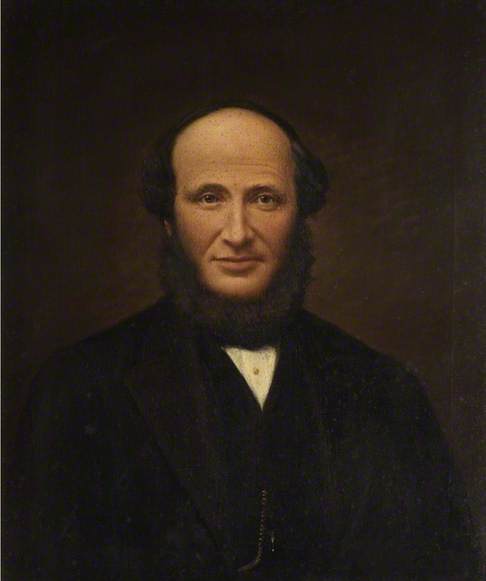 This sitter does not look at all like Disraeli – see for instance the many portraits in the National Portrait Gallery.

'Thank you for your enquiry. You are not the first person to observe that this painting does not look very much like Disraeli!

Unfortunately we have little in the way of documentation for this painting. It is an item that was found in store and has been allocated an inventory number. So we do not have the original accession information at present.

I can only presume that the person documenting the painting thought that the sitter looked like Benjamin Disraeli.

For reference, I checked the back of the painting and the canvas is inscribed 'BENJAMIN DISRAELI/1804-1881'. It is written in fairly modern hand. So this is presumably the reason for the attribution.'

This painting is now listed as 'Portrait of an Unidentified Man (previously thought to be Benjamin Disraeli)’.

These amends will appear on the Art UK website in due course.

If anyone has any new information about this painting or artist, please propose a new discussion by following the Art Detective link on the artwork page on Art UK.

It looks as if it had been copied from a 'cabinet' format photograph. It's certainly not a likeness of Disraeli.

This character does not look even remotely like Disraeli! Surely it is more likely that he is a local worthy in Somerset such as a Victorian mayor of Taunton. If the museum don't know,the answer might come through circulating his image to the local media and history societies. It would make an interesting local challenge...

Have you considered that the portrait could have originated from the estate of Benjamin Disraeli (either at his death or as the result of subsequent sales of Hughenden Manor)? In 1835, Disraeli unsuccessfully opposed Henry Labouchere, later 1st Baron Taunton, for the Taunton seat...but the campaign and the resulting conflict with Irish MP Daniel O'Connell had the happy consequence of propelling his name onto the national stage. Perhaps the portrait is a souvenir of that contest? I have looked at the faces of men who figured in the period and unfortunately, do not have a candidate for the sitter.

Certainly the identification of Disraeli can be removed from the collection information and from Art UK's listing. Patsy's suggestion of others in Disraeli's circle is a good one. And indeed it does look like it is painted from a photograph. Most likely, as Oliver noted, the man here is a Somerset or Taunton worthy. That is the area to focus on. Perhaps the North Somerset Council could place the image on its website and/or in a local paper as a mystery needing to be solved. It does seem that local information will be the key to this discussion.

John Copley, 1st Baron Lyndhurst, was a particular influence on Disraeli during the 1830s (see links below for two portraits of Lord Lynhurst ca.1836 and earlier). He not only guided him politically, but may well have reconciled Disraeli to his Jewish heritage. Your sitter's features strike me as of Jewish origin and you may find your sitter among Lord or Lady Lynhurst's intimates.

Thank you for all your comments and suggestions. They are really helpful! Although, I'm not sure we've quite got to the bottom of it yet.

Most of the portraits in the North Somerset Council museum collection have local links so I agree that the way forward is probably to circulate the image locally.

We have given this a go but I am pleased that the North Somerset Council may be able to tap local information in order to identify the sitter, so at this point I propose that we close this discussion.

I invite feedback about the possibility that the sitter is Lord George Cavendish Bentinck (1802-1848).

There are a number of items related to this individual at Hughenden Manor.

My suggestion springs from the similarities between the portrait above and the drawing below. I acknowledge the difference in the quality of the costume and can offer no explanation for it.

The costume isn't an issue, Patty, but the physiognomy seems quite wrong. Moreover, that sort of chin/neck beard was never popular with the British aristocracy, and is inconceivable as early as 1848 (when he died). Lord George certainly never had one, he had large sideburns - in the portrait you reference (which is not a good one of him...if it is him), the chin shading and black stock may be confusing you. This is a more typical image of him: http://www.npg.org.uk/collections/search/portraitLarge/mw124252/

The portrait under discussion is a much later work - 1860s-70s, I would think (perhaps even later), and the sitter is unlikely to be from an aristocratic background. He looks middle-class and quite probably Jewish (as you previously suggested) - the origin, no doubt, of the mistaken identification as Disraeli.

Thank you for your insight, Mr. Bullock.

I don't believe there has ever been a Jewish population in Taunton, the nearest Synagogue was probably Bath which closed in 1874 - so one perhaps negates the other. The key to the identification was probably the donor, have all the avenues to this been lost completely or might there be a 19th century accession register? Presumably the heritage center is made up of defunct local institutions that amalgamated, each with its own accession records?

The style of beard in this portrait is called a “chin curtain” in some references.

I have looked at the faces of many friends and colleagues of Benjamin Disraeli and find that this style of beard was favored by Disraeli’s brother, James Disraeli (1813–1868).

P.S. I have learned more about the collection of portraits at Hughenden Manor. After the death of his wife Mary Anne (1792-1872), Disraeli began to ask his closest friends to send him a portrait.

Disraeli was especially close to Baron Mayer de Rothschild and his family. At the time of her marriage to Archibald Philip Primrose, 5th Earl of Rosebery, his only child Hannah de Rothschild was an orphan; Disraeli was joyful and gave her away at the wedding (1878) which was unattended by her Rothschild relatives.

Despite long and close association with many family members, the only Rothschild portrait in the Hughenden Manor collection is of Nathaniel Mayer ('Natty') de Rothschild, 1st Lord Rothschild, son of Baron Lionel de Rothschild.

Refer to this book for a discussion of the role Nathaniel “Natty” de Rothschild played as a junior executor of the Disraeli estate, including destruction of correspondence.

Patty, I'm puzzled by your apparent conviction that this is someone from Disraeli's circle. I suppose it's just possible, and some weeks ago you hypothesized circumstances in which it could have happened. But the truth is that there is not the tiniest hint of any evidence for it - the *only* mention we have of Disraeli is as someone's daft (and probably recent) guess of the sitter's identity!

As others have suggested, the likeliest identity is some local worthy of no great import; and the work's pretty mundane quality, and likely photographic basis, would tend to support this.

I completely agree that "there is not the tiniest hint of evidence" except for the writing on the back of the painting. I tried to follow the only clue and report where it led me.

It does seem reasonable that faced with an unknown sitter, someone would at least document the source of the object.

Perhaps Benjamin Lumley ((born Benjamin Levy ca. 1811-1875) could be considered as the sitter. After 1841, he was the manager of Her Majesty’s Theatre (later Haymarket Opera House), London. You will find social correspondence between Lumley and Disraeli in the Disraeli Project archives (1848-1874). In addition to Count d’Orsay (who drew Disraeli in 1837 and Lumley in 1847), both men frequented Gore House, home of Marguerite Gardiner, Countess of Blessington (1789–1849).

Tried every portrait/engraving/photo extant of a Somerset constituency MP for the period 1845-90 and none of those I can see fit our man (possible exception is Edward William Cox [see http://www.spiritualismlink.com/t1285-the-psychic-force] but very much a log shot and probably not him.

I suspect this is a local bigwig (Councillor, Mayor or Recorder - though probably not an official of the latter type since there is no indication of office. This is probably a portrait of a private individual involved in town politics somewhere in Somerset, c.1860-75 - but where and who would be impossible to determine without a lucky hit on a carte de visite or an wood engraving in a local newspaper.

Everyone has worked very hard to identify this sitter but still there is no compelling evidence for who it might be. Circulation of the image locally might be a better option, so I propose we close this discussion.

The collection have been contacted for their opinion.