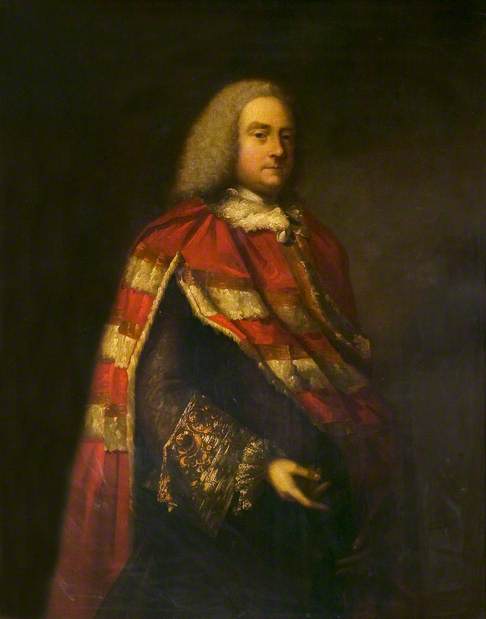 This looks like an earl, going by the robe, and it looks like an 18th Century picture. That would mean the sitter cannot be the one suggested [it was previously titled Portrait of a Gentleman in Robes (possibly Sir John Vaughan, 1769–1839)], since he was a judge who only became a knight (in 1828). In any event, the sitter looks at least 30 and quite probably older, which means the picture would have to be no earlier than 1800 or so for a man born in 1769, and that is too late for such a wig as shown.

The Collection has commented: 'The suggestion of the sitter came from the author of our 1955 Catalogue of Local Portraits, but it sounds like that does not fit with the dates and costume.'

its quality suggests that it is a copy

William Thuillier has commented through an email sent to the Art Detective email:
'The robes are similar to those in the portrait of the first Earl of Mansfield by Singleton Copley in the NPG. I’m not sure the facial resemblance is close enough though. Almost certainly nothing to do with Wright of Derby'.

Given the location of the picture, could this be an Earl of Leicester?

The picture was a gift from Mr C. Hedley Haddon in 1943. Does the collection know more about the donor and/or prior provenance that could be helpful?

All we know is that the donor lived in Leicester in the 1920s before moving to Bournemouth.
This painting was one of a number that were given by him to the museum in the 1940s.

If this were to be an Earl of Leicester, the possibilities are:

No one held the title until it was created again in 1784.

The later Earls of Leicester lived in Norfolk, not Leicestershire.

Yes, Jacob, that began with Thomas Coke, who was Earl of Leicester 1744-1759, and whose seat was Holkham Hall. If we exclude him, that leaves the last two Sidney earls.

However, the Sidney earls were based at Penshurst in Kent, not Leicestershire, so I suppose this need not be an Earl of Leicester at all.

There was really little reason to suspect it might be, I'm afraid. It may seem baffling, but the territorial designations of British titles - even at creation - frequently had no discernible connection with places where the holders lived, or held office / property, or indeed any other aspect of their lives; and as you have discovered, no post-mediaeval Earls of Leicester - even the great Robert Dudley in the C16th - have been connected with the town or county.

A distant forebear of mine, the first Earl of Orkney (1696), was a Scot, but born over 200 miles as the crow flies from the Orkney Isles, which he almost certainly never visited - most or all of his adult life when not on campaign seems to have been spent in the south of England. Another Earldom created at the same time, that of Jersey (1697), was also unconnected geographically with its holder - indeed my father was once asked by the previous Earl (who'd actually moved to Jersey himself) if he could get me to research why they'd been given that particular title, as they had no idea at all! I did come up with a plausible reason...but this diversion has already been too long to get into that.

The portrait, or at least the one it probably copies, looks to me to date from the mid-C18th or even a bit earlier: the style of wig can sometimes be misleading in older men and those holding high office, but I think his huge cuffs preclude it being any later in the century.

Yes, the sleeve cuff and the wig would be the main clues to dating. Perhaps Lou Taylor can give us a more precise date range. However, I assume everyone agrees that this is an earl.

What about William Legge .Earl of Dartmouth
Privy Seal.???

I'm not even sure that we can say this is definitely an earl. Acccording to Wiki (https://bit.ly/3uNAxNC):

"Miniver bars (edged with gold oak-leaf lace) on the right-hand side of the robe indicate the rank of the wearer: 4 for a duke, 3½ for a marquess, 3 for an earl, 2½ for a viscount, and 2 for a baron"

This has 3 at the back but only 2 are actually visible at the front, though it's a bit shadowy. It could just be the way it is painted and it's an earl or it could be a viscount if that is how the 2½ bands are done. Possibly a viscount who wishes he was an earl. Lou Taylor would undoubtedly know more.

One thing that may be significant is that this person chose to be painted in robes at all. Nobles in the 18th century will often be painted with decoration such as the Garter, but robes are normally only worn in parliament. Portraits in robes do exist - lawyers as with the Mansfield one referred to above - are especially fond of them, but they're less common. These aren't Coronation robes (which involve even more dead squirrels) so it's not to commemorate that sort of occasion. So it could have been made to mark him becoming ennobled or succeeding to a title.

He is definitely an earl. I, too, was unsure for a while whether the horizontal bars mightn't be the two-and-a-half of a viscount, as when looking at other examples (which are mainly frontal views) it wasn't clear to me what the 'half' looked like and where it was: see, for example, https://bit.ly/3uJGif7 - https://bit.ly/3ePR3qR - https://bit.ly/3buDBGD

However I eventually found some images which show that while both earl and viscount have three showing at the front, for a viscount the bottom one does not continue round to the back - it is thus only a half-bar: see https://bit.ly/3w4QyPm - https://bit.ly/3ynnswG - and attached.

I don't think think peers sitting for portraits dressed thus is as unusual as you imply, Mark. There are many, many examples to be found online, and on her blog the Countess of Carnarvon writes of portraits of her husband’s earlier ancestors, "Often they chose to be dressed in their parliamentary robes..." - https://bit.ly/3ohiLzL.

It would be very convenient if such portraits were usually painted to commemorate their introduction to the House of Lords, but I fear it's often not so. The one shown in Lady C's blog, for example, must show the 2nd Earl at least ten years after his succession (which was in 1811, aged 39); and picking another at random, an 1803 Beechey of the 1st Earl Romney (created 1801) shows him standing by his desk with documents relating to the Marine Society, for whom the portrait was painted - https://bit.ly/3fcG35y. And this was not just a C19th thing - here are a few of many C18th examples of sitters wearing the same robes long after they'd entered the H of L:

As already noted by Osmund, and barring opinion to the contrary by Lou Taylor, the date (at least of the original if this is a copy) would appear to be 1740-1760, so c. 1750 seems reasonable.

Can he be one of the Earls at the edge in the paintings by West and Copley pf the Death of Chatham?

Martin, the Copley painting is from 1781 depicting an event from 1778; the West version is from 1778. In both cases, the peers have later-style wigs than our earl, befitting the date, although the prelates have older-style wigs.

Louis, that earl is too early to be our man.

Jacinto- look at the face of the picture in the Wikipedia page.And the wig ,and the dreadful cuffs-what would Beau Brummell say!!!
I think with a high probability that this is our sitter,but a bit younger-- and that our painting is a man of about 55 to 60 ,which would give a date of about 1730.
But of course being the !st Earl he wouldn't be belted,but what ever :-) .

I disagree, Louis. I don't think this picture is earlier than 1740, when your earl would have been 68, and this man looks younger. I would still, however, like to hear from Lou Taylor regarding dating.

Something about this reminds me of John Astley. Dating I'd say 1760s. Probably an earl, yes.

Astley is an attractive idea. Compare his Rev. Legh Richmond, 1759, on ArtUK.

The portrait of Richmond (link below) has a similar "smoky" quality, which also appears in some other portraits by Astley. It also has a fairly similar wig and is dated 1759:

He looks too young to be Pulteney c. 1760, when the latter was in his seventies.

This is speculation, but if the painter was a minor portraitist, that would seem to go more with a newly or recently created earl, since a more established one would presumably have gone for a bigger name. Osmund, do you know of such an earl for the date in question?

To throw the cat amongst the pigeons, and why not, who’s the most famous person it could conceivably be (trying to drive the value up)? Benjamin Franklin. He was in London most of the time between 1757 and 1775, representative of the Assembly of Pennsylvania. How do we know his position as the most famous representative of the American colonies in London didn’t put him in Lords’ robes for ceremonial events?

Benjamin Franklin dressed as a Lord would be a very controversial sight to Americans, but he was a British loyalist until he wasn’t, he was part of the British Empire under the King until Independence was declared. Franklin held royal appointments, wanted to remain part of the empire and was one of the last of the Founding Fathers to support full independence.

If so… this is a multi-million $ portrait! It might bring in a lot of ‘Benjamins’!

Might it be that, at time such as when Benjamin Franklin was representing the American colonists to the Lords Privy Council in 1774, as in this work, https://upload.wikimedia.org/wikipedia/commons/1/1e/Franklin_before_the_lord's_council,_Whitehall_Chapel,_London,_1774_LCCN00650385.jpg he may have in reality possibly also been wearing the regalia of a Lord himself at the time, yet such incidents are illustrated after with Franklin in more American colonial ‘Founding Fathers’ post-independence -type dress, so portraying how he would like to be seen and thought of after the fact.

Might he have been a peer himself, or equivalent to it, but this is forgotten or retroactively rewritten by both sides after American Independence, as neither side would want this to be known. His closest British friends and associates included Earls.

Has Lou Taylor been asked for an opinion about those massive embroidered cuffs??
And just to keep the Earl theme here is Earl Chatham-1766 onwards.
https://www.npg.org.uk/collections/search/person/mp00850/william-pitt-1st-earl-of-chatham

Judging by the style of the wig and the deep cuff, which looks as if it might
be made of brocaded silk, I would suggest that this portrait dates from
the 1730s.. maybe - mid 1730s maybe ... style of wigs varied a lot by age
and fashion awareness... ..... see paintings:
-Detail from Cane and Boehm Family Group 1734-5. Tate T07505
- see also deep cuff in portrait
of Frederick_Lewis,_Prince_of_Wales_by_Philip_Mercier.1735-6 NPG
- even Heins portrait of Handel 1740

Title
Portrait of a Gentleman in Robes